Was it right to increase the total reservation quota for governemnt jobs to 60 per cent? 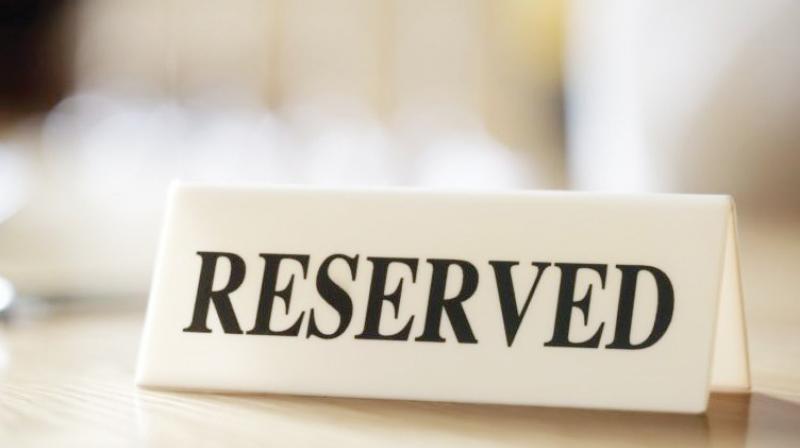 Image for representative purpose only

The new move from the government has already come under the scrutiny of Opposition parties and political observers. They allege that this new reservation scheme is nothing but the government’s plan to attract upper caste votes ahead of the upcoming Lok Sabha elections.

Does the upper-caste quota seem like a good move from the government? Or, as alleged, is this just a political trick with eyes on elections? As the reservation system has always come under debate, was it right to increase the total quota to 60 per cent? Won’t the increase in reservation adversely affect deserving candidates?

Not justified
Bandana Sondhi, social thinker
The proposed reservation for the economically backward people among upper castes is not justified. It leaves very little opportunity for the deserving candidates as there is already a 50 per cent reservation for SCs, STs etc. How can the regular middle classes and other people ever hope to get a government job, if there is already such a high reservation percentage? In a country as vast as ours with a huge population, this seems unfair and it is spoiling the existing balance. While it is great that a lot of preference and consideration has been given to the classes which really require quota, one has to think of the bigger picture and not forget the ordinary citizen. Soon, the balance will tip totally to the other side and there will be a lot of unhappiness and unrest in the country.

Move will benefit people
Neel Tandon, banker
Despite the fact that the Bill is facing criticism from the Opposition as the quota is the government’s plan to woo the upper class voters ahead of the Lok Sabha elections, I think it is a beneficial move. In India, for the first time after 71 years, some political party has supported reservation on the basis of economic criteria.

Earlier, the parties in power used the upper class as their vote bank. For example, in 2004 manifesto, the Congress government had promised to give reservation to the upper caste on the basis of economic background, but they did not do it. I think at least four per cent of the population will directly benefit. Also, it will give direct benefit to 28 per cent of total population, who are below the poverty line segment.

Abolish Reservations
Nandini Gopalakrishnan, IT professional
The Prime Minister has termed the reservation Bill ‘a victory for social justice’. And it seems to be a relief for many students who can’t afford better education facilities, just because they belong to the ‘upper’ caste when those who score below 50 per cent are marked eligible as they are from the backward community. The PM tweeted: “It is our endeavour to ensure that every person, irrespective of caste or creed, gets to lead a life of dignity and gets access to all opportunities.” So, my question is, why do we even need reservations then? On a personal note, the reservation system itself should be abolished.  It was introduced for the uplift of the backward community and to bring them to a level playing field. I agree that still majority of the people are in the dark when it comes to education and government jobs. But is reservation the solution? This increase in the reservation, to an extent, will have to be linked with political gimmicks. We should be thinking of providing free quality education to all the economically weaker sections. If we are aiming to be a developed economy, only the ‘quality’ of the population will be helpful. A job must be given to the deserving. I always believe in merit-based rewarding system. No individual should be deprived of their rights to get education and job, based on their caste.

No benefit to the poor
Sumanth C. Raman, political analyst
I don’t think this is going to be very useful because the limit of Rs 8 lakhs is very high, and almost above 90 per cent are covered in that. So, the poorest of the poor won’t be able to benefit from this. The whole purpose is to benefit the really poor people and if the limit is of `8 lakhs which is Rs 66,000 per month and somebody earning this much is called poor then it's very unlikely to be useful.

According to Supreme Court, previously the 50 per cent ceiling was sacrosanct, even in Tamil Nadu the 69 per cent proposition is still in the court and is not finalised, and to increase this is beyond 50 per cent like opening the pandora’s box, already parties like Samajwadi party are saying to increase the reservation for OBCs also. I don’t think it will stand judicial scrutiny. Moreover I feel it's just an announcement before the elections to win some votes.

Against Constitution
Tadi Vidura, marketing professional
In its most fundamental state, because the planned reservation policy peaks beyond 50 per cent, it is going directly against the Constitution. Modi has been trying to placate the middle class since his massive loss in the recent state elections, scrambling for a foolproof position for 2019 election.

Tight competition on cards
Suparna Kar, sociologist
Reservation for economically weaker sections has been a long-term demand of those people who are critical of quota based on caste and other forms of social status. They felt that the creamy layer of these categories unduly benefitted from them. However, the current format, which seems complicated in terms of who will benefit, will push reservations to 60 per cent, which will definitely increase competition among candidates belonging to the general category.