Life   More Features  14 Jan 2020  Dancer raises the issue of male-female union like that of Shiva and Shakti
Life, More Features

Cross Mix Ally was a show about Shiva-Shakti and beyond. In our society today, females are considered the weaker sex. 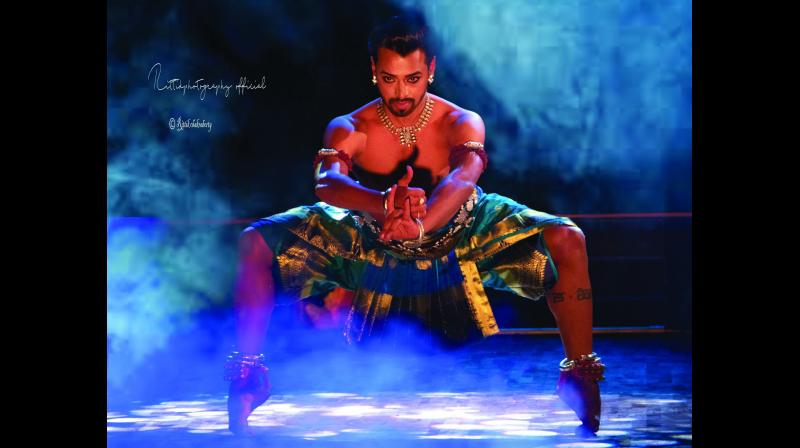 Both Shiva and Shakti are everything and nothing in their own wake: If Shiva is nothingness, the shunya, Shakti empowers it as the beginning.

Dancers have always been inspired by mythology — the Ramayana, the Mahabharata, the Gita have often been brought on stage by dancers using all sorts of dance forms. Not just the holy books or verses, even gods and goddesses have appeared on stage to tell their tales and at the same time raise various issues prevalent in society.

Recently, at the very prestigious Uday Shankar Dance Festival, organised by the West Bengal government, and held in Kolkata, many dancers from all over India came on stage for five long days to present varied classical, folk and semi-classical dances with themes that stimulated our minds and brought brightness to their presentations. Among the sea of performers from all over the country, one artiste who totally stood out was the very talented Subhajit Khush Das, who presented Cross Mix Ally, a production based on gender issues very smartly and beautifully, linking it to Shiva and Shakti.

Divine couple, Shiva, Shakti: The “tantric cosmology” bases its foundation on two fundamental forces on which the entire universe was created — they are indestructible in their cosmic union — these forces are known as “Shiva-Shakti”. The essential aspect of the masculine and feminine principle is when we take the metaphysical principle into consideration: both Shiva and Shakti correspond to the major principle; that of masculine and feminine energy. The masculine principle represents the god force and the feminine principle represents “energy” in its raw form.

The act of creation is when Shakti, who often manifests as Kali or Durga, represents the immanent aspect of the divine force, participating actively in the act of creation. Shiva and Shakti are a same whole, where Shiva and Shakti are like the twin flames; the mirror image of each other. They complete each other. Thus, they are an indestructible force that unites together to create the entire cosmos.

It is true that Shakti takes the active role and takes charge to actively participate in the act to procreate whilst Shiva is mostly depicted as immobile. However, according to metaphysical knowledge, both, the male and female divine parts involve in the divine union. Shakti merely initiates actively. It is believed that before their union, Shiva taught Shakti 84 yoga asanas before taking her as his consort in tantra. Shiva, the divine masculine force, is immobile and static, only till the divine feminine force, Shakti, does not actively participate in the divine union.

Tantra is said to be the fabric of the universe, Why is it that Shiva and Shakti indulge in a tantric union? It is because tantra is the fabric of the universe. The word tantrism has been derived from the Sanskrit word “tantra”, which means a system. Tantra comes from the root “tan” which means “to straighten”, to “continue” or to “multiply”. Tantrism is also said to be the divine revelation. The knowledge of tantra has not been found in the scriptures, but have come to the wise and the yogis through divine vision, in a deep state of dhyaan (meditation). It was sourced to them through the cosmos to enable mankind.

The concept of Ardhanarishwar is also very popular with dancers. When Shiva pulled in Shakti to amalgamate in him as his half, that represents the masculine and the feminine that we all have within us. When the masculine and the feminine is balanced, we are in an ecstatic state. This union is not external, but internal. As per Hindu mythology, the story of Ardhanarishwar took place when Shiva and Parvati got hitched in the human union of marriage. She was eager to experience the ecstatic state that Shiva was in whilst being in a deep state of meditation. He asked Parvati to sit on his lap, and Shakti without any hesitation sat on his lap. Shiva, on seeing her absolute surrender, pulled her in to become his half that was the birth of the Ardhanarishewar form.

Then what is this divine union all about? This can be a big question in our minds. Tantric sex is not two people longing to meet, rather two dimensions of life longing to meet in the divine union. Shiva and Shakti include each other as their halves to denote a way of life — to denote the power that a man and a woman are in their entirety with each other. The Shiva-Linga as the union of Shiva and Shakti is a preposterous notion. The Shiva-Linga represents the very fabric of the universe: How the universe is balanced on the masculine and the feminine energy. A woman on earth represents Prakriti, the ultimate feminine power who creates, whilst a man represents the Purusha, the ultimate masculine power who empowers creation.

Cross Mix Ally was a show about Shiva-Shakti and beyond. In our society today, females are considered to be the weaker sex — it is to be understood that if there was only masculine energy that existed, there will be everything but nothing at the same time. Because both Shiva and Shakti are everything and nothing in their own wake: If Shiva is nothingness, the shunya, Shakti empowers it as the beginning. The show boldly spoke of the fact that “only when Shiva is united with Shakti does he have the power to create”: thus, raising the topic of the issue of gender in society.

Subhajit is a young, dynamic dancer-choreographer who is presently learning under the able guidance of Rama Vaidyanathan and has received the prestigious Nritya Shiromony Award from the government of Odisha. Not just that, he has also been trained in contemporary dance under the supervision of my dear friend Terrence Lewis and he is also the winner of the Akhil Bharatiya Sagaskrutik Shanga.

Subhajit is a truly a gifted dancer has been learning Bharatanatyam for over 12 years, and Uday Shankar’s style for nine years, Rabindra Nritya (Rabindranath Tagore’s style) for eight years, contemporary dance for five years and has trained in the folk dance form Chow of Purulia. He has worked in the Mamata Shankar Ballet troupe for six years, has been a part time teacher at Don Bosco School and St Josheph Convent in Kolkata for the last eight years.

Not just that, Subhajit is presently running his own dance company named “Subhangik” and is also active in the world of cinema, he has acted in a film titled Gaaner Opare and also been a part of movies for the mass communication students of St. Xavier’s college. The profile of this talented man does not end here. He has also choreographed in two upcoming films: Cross Connection and Game Over.

Apart from working with renowned Indian choreographers, this brilliant dancer has also worked with many international choreographers such as Frances Rings and Emma Powell from Australia, Bawren Tavaziva, Gerrad Martin and Dam Van Huynh from the United Kingdom, Leng Poh Gee from Malaysia, Janet Lily and Gianin Loringett from the Unites States, Mrika Mutsumi from Japan and Martini Peliponsky from Argentina. He has also performed and taught dance in Bangladesh, Sri Lanka, Singapore, Malaysia and Japan.

The concept and choreography of this unique presentation, Cross Mix Ally, was done by Das himself and performed along with his dynamic team of dancers. The music was a compilation from various artistes and arranged by tenth harmony. The voice over was by Amit Kumar Bhagat and the exceptional dance movements of the production were highly inspired from different dance styles, mainly Bharatanatyam, Uday Shankar’s style and a lot of inspiration was taken from the sculptures of Khajuraho temple. Subhajit and his team performed with gusto while photographer Rittick Chakroborty captured each emotion of the performance beautifully.

Sandip Soparrkar holds a doctorate in world mythology folklore from Pacifica University USA, an honorary doctorate in performing arts from the National American University, He is a World Book Record holder, a well known Ballroom dancer and a Bollywood choreographer who has been honored with three National Excellence awards, one National Achievement Award and Dada Saheb Phalke award by the Government of India. He can be contacted on sandipsoparrkar06@gmail.com