Love in the time of social media

While a post on social media seems a must for expressing love, meet couples who are choosing to go offline to celebrate their Valentine’s Day. 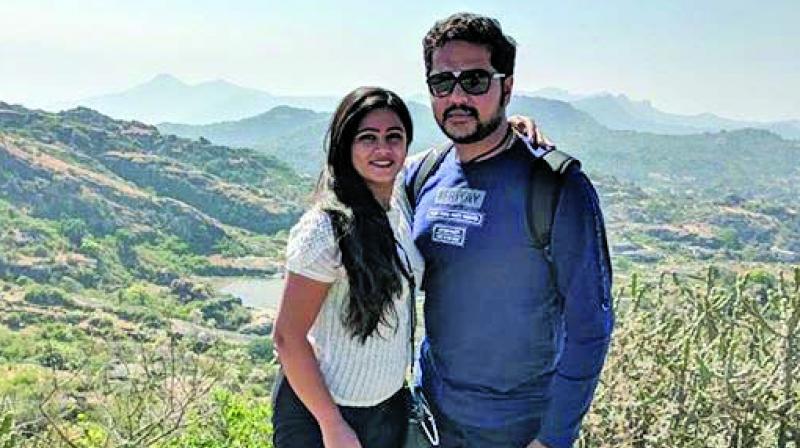 Nicky Mamnani (24) and Vicky Mamnani (25) met in school and a decade later the couple registered their marriage in the court but they are yet to tie the knot in the Hindu/Sindhi ceremony.

It’s a great feeling to fall in love and tell the whole world about your soulmate. But there’s more to love than a couple of selfies and hashtags. Obsessively posting your every move on social media may not be such a great idea and relationship experts believe that it is good to keep your love life away from the prying eyes of the public. This Valentine’s Day we speak to couples who plan to spend quality time with their significant other, the old fashioned way.

Nicky Mamnani (24) and Vicky Mamnani (25) met in school and a decade later the couple registered their marriage in the court but they are yet to tie the knot in the Hindu/Sindhi ceremony. The high school sweethearts have their own romantic routine in which they have dinner and go for long walks every night but for Valentine’s Day, they have planned a rather special evening.

“To make this Valentine’s special, I will be cooking some really nice food and we are having a movie night on my terrace. I am going to set up a nice and cosy atmosphere by lighting a candle and we plan to watch a good movie that we both are interested in, we might choose either between Harry Potter or Zindagi Na Milegi Dobara. Also, we are trying to switch off our phones and keep it aside just to give each other some extra special time together beyond the routine things that we do.”

Even as Nitin Beri (52) and Shalini Minocha Beri (53) celebrated their 29th wedding anniversary earlier this week, the couple has been together for 35 years. Shutting between Gurugram and Manali, the duo has spent every second with each other over the years and believes it is over a period of time that one comes across the best partnership.

“As you get older, you become closer to each other because you know you are depended on each other on a lot of things. This is how it works — when you start off, you are like two individual rocks and with time you keep rubbing on each other until you have smoothened the edges out and then you reach a point where your fit is perfect. We have even started liking the same food and the same restaurant. For years, we battled the mixed choices on films but now when we sit down to watch Netflix, we have a system. When we are together, we watch things we both enjoy and when apart, we watch our thing. But what matters that most are the things that you do on daily basis.

He cooks for me every day. It became an unsaid thing from early on in our relationship where there are certain things I cook best and certain he does. So, you reach the perfect balance. Also, we are both hardcore foodies so inevitably we go for dinner dates every day and this is our favourite form of entertainment. We have our favourite restaurants and relish our meals in each other’s company.  One thing is special — he shops with me that most husbands don’t do. Women would need their BFFs for yay or nay to an outfit. He just screams ‘Eww’ or nice and I am sorted!”

Twenty-four-year-old Khevna Pandit is fairly active on all social media platforms but she rarely posts about her boyfriend Chris Gavvan. According to her connecting personally matters more.

“Despite the fact that we both have gruelling schedules, we make it a point to give each other a video call at the end of the day. And, let alone social media, we don't even prefer WhatsApp to text each other, we still SMS each other. Guess we're old school like that!”  To celebrate Valentine's Day, the couple met over the weekend and kept it low key. "We were meeting after two months! So, we spent on a good dinner, went out for Ek Ladki Ko Dekha Toh Aisa Laga and shopped in Pune. Towards the end, we just dropped by at an Archies to get each other a little Valentine's Day something. He left me his hoodie and a stuffed dog and I gave him a crystal Ganpati for his new car that he has just bought… I don't think a post on Instagram will be enough to tell him what I feel when he's 200 miles away for months."

Social Media does bring people together and for Amit Peshwani and Khwish Hingad, Instagram was their Cupid but to make Valentine’s Day special, the couple took a break from the Internet.

“So I am in a long distance relationship for the last three years and social media is what connected us and connects us every day. We spend everyday living far away from each other but this Valentine’s, we thought of doing something different - come closer in real life and stay away from social media. We planned a trip to Goa over the weekend so that we could enjoy hindering our work schedule. So, instead of watching pictures of other people and missing each other, we turned the table. We went to beaches, churches, shacks and took long drives to nowhere. She surprised me with a box of reasons as to why she loves me and chocolates while I surprised her with a ring. All of it was perfect and nice.”

Twenty three-year-old Abanti Chattopadhyay, who has been in a relationship with Megh Manvi for the last two years, has always celebrated her love life publicly. “I've never hidden my significant other on my social media platforms. I've celebrated our love quite publicly. However, I refuse to make a post or acknowledge Valentine's Day and everything it stands. I object to the way this day perceives love and affection. My issue with it is not moralistic, but idealistic. I refuse to become a pawn in an elaborate hallmark nexus that capitalises on such human emotions. If I want to celebrate love, it will be on my terms.”

Dolly Nair, 29, is married to Amit Gupta since the past one year. The couple doesn’t believe in celebrating Valentine’s Day but likes to indulge in little acts of love every day.

"I don't find it necessary to put up details related to my personal life on social media. That's something that's just for my family or me. As a couple, it's important that we communicate with each other so we make it a point to ask each other about our day once we come back home. On weekends, we cook together and always divide responsibilities. We don't celebrate Valentine's Day because we don't really believe in the concept but we love doing impromptu things, like grabbing dessert if one of us feels like it and that we would do on any day of the year. It's about making an effort and doing something extra for your partner and you don't need a special day to do that.”