In defence of Amazon

Indigenous chief Raoni from Brazil to travel across Europe to highlight the threats to the Amazon ecosystem. 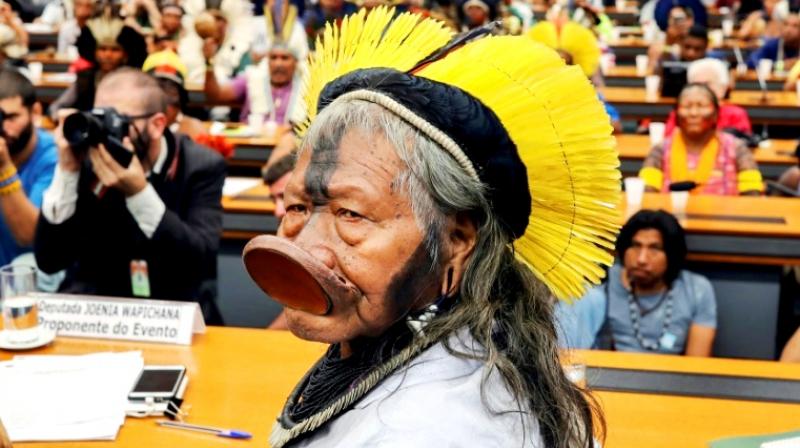 Kayapo ethnic group leader Raoni Metuktire attended a meeting with deputies to discuss the rights of indigenous people at the National Congress in Brasilia. (Photo: AFP)

Brazil's legendary indigenous chief Raoni headed to Paris recently for the start of a three-week tour across Europe where he will meet heads of state, celebrities and the Pope to highlight growing threats to the Amazon.

The elderly Kayapo chief, internationally recognisable through his traditional lip plate and feather headdress, will seek to raise one million euros (USD 1.1 million) to better protect the Amazon's Xingu reserve, home to many of Brazil's tribal peoples, from loggers, farmers and fire.

Raoni Metuktire, famous for his work campaigning in defence of Brazil's rainforest alongside personalities like pop star Sting, will be accompanied by three indigenous leaders from the Xingu. They will hold talks with French President Emmanuel Macron and environment minister Francois de Rugy before travelling to Belgium, Switzerland, Luxembourg, Monaco and Italy where they will meet with Pope Francis at the Vatican, according to the Paris-based Association Foret Vierge or Virgin Forest Association, of which Raoni is honourary president.

Raoni´s trip comes as the Amazon faces increasing threats from mining and farming lobbies who have found a champion in far-right President Jair Bolsonaro, a climate change skeptic. Funds raised will be used to replace or reset hundreds of signs and markers on the boundary of the vast Xingu as well as pay for drones and satellite imaging to monitor the region and create firebreaks, Foret Vierge said in a statement.

Some Xingu communities also need urgent investment in health, education and know-how in extracting and selling renewable forest products. "Thus Indians will be able to live in dignity in the Reserve while protecting it and their ancestral cultures, instead of going into urban or rural areas where they cannot find their place," the statement said.

There are hundreds of demarcated territories in Brazil, established in the 1980s for the exclusive use of their indigenous inhabitants and access by outsiders is strictly regulated. But Bolsonaro's anti-environment rhetoric before and after winning last October´s elections has alarmed indigenous communities and green groups.

Bolsonaro has said he wants to "integrate into society" Brazil's estimated 800,000 indigenous people who have long battled to protect their traditional way of life, away from towns and cities. "The Indian cannot continue to be trapped within a demarcated area as if he were a zoo animal," the former army captain once said.

A number of recent reports have sounded the alarm over rampant destruction of the Amazon and threats to indigenous inhabitants. An indigenous alliance warned last month that native peoples in the Amazon faced an "apocalypse." They warned in particular of Bolsonaro's pledges to allow more farming and logging in the Amazon and to ease safeguards and grant more licenses for Brazil's huge mining industry and build more dams.