A video of the procedure, has, since then, been shared by one of the doctors, and has gone viral. 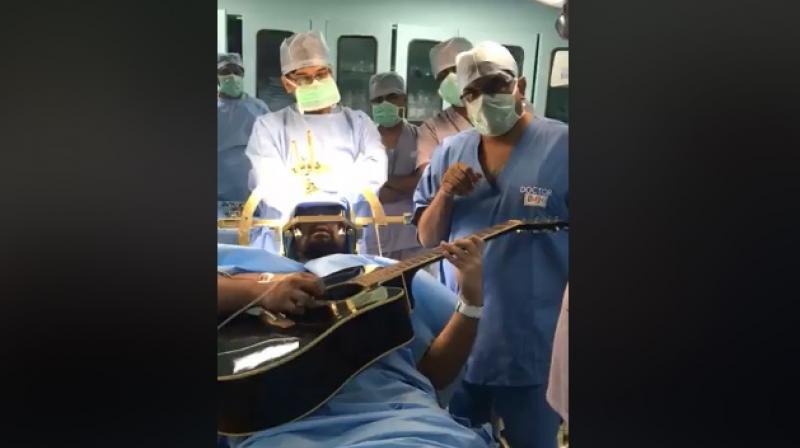 A video of the procedure, has, since then, been shared by one of the doctors, and has gone viral. (Facebook Screengrab/ Sharan Srinivasan )

A difficult medical procedure performed in Bengaluru saw a patient strumming his guitar in the surgery room as doctors operated on his brain.

A video of the procedure, has, since then, been shared by one of the doctors, and has gone viral.

Dhaka’s Taskin Ali was told by doctors that there was no cure for his condition. Having been diagnosed with Focal Hand Dystonia, the guitarist had a condition that affected his ability to play the instrument or even type on his cell phone with his left hand.

The 31-year-old read about Abhishek Prasad, a guitarist who had been operated upon for the same condition in July 2017. He saved up for 10 months and even sold one of his guitars before travelling to Bengalurur with the hopes of regaining proper function of his left hand.

According to an NDTV report, the surgery took place on May 17 by a team of doctors at Bhagwan Mahaveer Jain Hospital in Bengaluru.

During the procedure, the patient was administered local anesthesia but kept fully awake for the surgeons to know if they are burning the right circuits.

Video showed Mr Ali rolling a coin between his fingers and even typing on his mobile while laying on the stretcher.

Talking to NDTV about it, Dr Sharan Srinivasan, one of the doctors who was a part of the surgery and later poster videos on Facebook said that the got near 100 per cent results during surgery.

Ali regained 100 per cent function in his 3rd finger along with strength and coordination in his hand, the statement said.

In a press conference held by the hospital, the patient strummed his guitar again - this time to show his recovery.