For sea urchins, beauty lies in the 'feet' of beholder 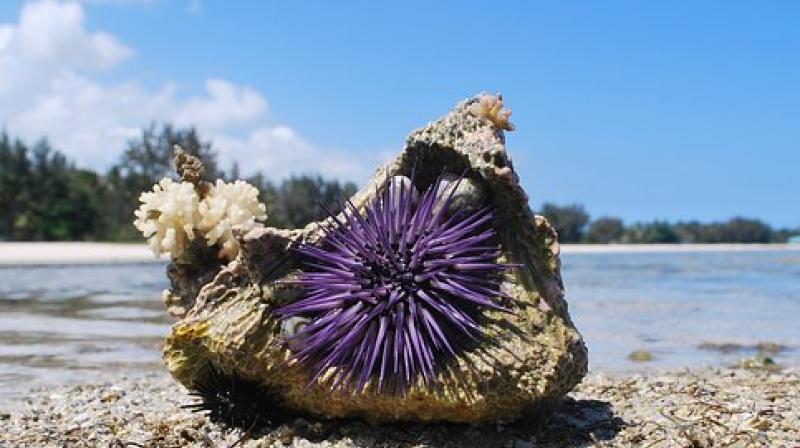 Turns out, sea urchins lack eyes. But the purpose is solved by another of their body part - tentacle-like tube feet.

According to a new study conducted by the Lund University, while sea urchins have fairly low-resolution vision - it is good enough to fulfill their basic needs.

"Sea urchins are currently the only animals that have been shown to see without having eyes. They see using light-sensitive cells in their tube feet, which resemble tentacles and, like the spines, are all over the body. You could say that the entire sea urchin is one single compound eye", said John Kirwan, who conducted the study as a part of his doctoral thesis.

The tube feet have other functions besides registering light. They are used for feeding and in some species are used by the sea urchin for locomotion. Others are used to attach to surfaces or as levers to correct its position when upside down.

John Kirwan studied the sea urchin species Diadema africanum. The experiments placed the animals in water inside strongly illuminated cylinders that had various dark images on the walls.

"Ordinarily, sea urchins move towards dark areas in order to seek cover. When I notice that they react to certain sizes of images but not to others, I get a measurement of their visual acuity", explained John Kirwan.

To obtain further data, he carried out another experiment in which he showed rapidly growing figures above the sea urchins, as a way of conjuring up an image of an approaching predator.

He then registered how large the figures had to be before the sea urchins would defend themselves by directing their spines towards the shadow above.

The acuity of vision was calculated using X-ray tomography and electron microscopy.
John Kirwan's calculations showed that of the 360 degrees surrounding the sea urchin an object must take up between 30 and 70 degrees for the sea urchin to see it.
Humans only need an object to take up 0.02 degrees in order to detect it, making it clear that their eyesight is poor in comparison with human eyesight.

"However, this is still sufficient for the animal's needs and behaviour. After all, it's hardly poor eyesight for an animal with no eyes," John Kirwan concluded.

The study appears in the Journal of Experimental Biology.