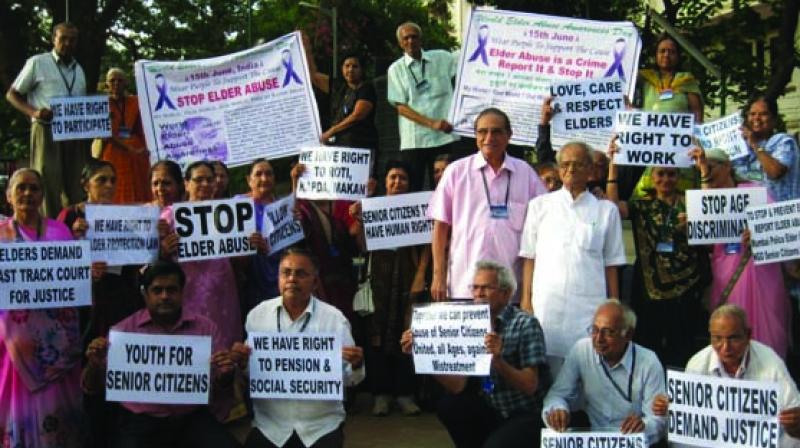 There is very little information available to older people that safeguards them and informs them about provisions in the country which can equip them to deal with their lives.

The month of June becomes very significant for senior citizens across the world. Around June 15 every year, a day launched by the International Network for the Prevention of Elder Abuse (INPEA) and the World Health Organisation (WHO) at United Nations as the World Elder Abuse Awareness Day (WEAAD), generally for a week or two before and after both developed and developing countries observe various events to mark the day. This year too many groups of people, mostly NGOs, civil society members at times along with their governments are building strong support for elders and bringing attention to the need for stopping elder abuse, neglect and exploitation of older people, which is emerging as a serious human rights problem. With demographics changing, populations ageing rapidly in absolute numbers and proportions, older people are increasingly facing the issue of abuse in different forms: physical, financial, emotional or psychological, neglect or marginalisation, sexual abuse at home, in institutional settings and in public places.

In India too, like in many other Asian countries as well as American and European societies, elder abuse in its different forms is becoming a concern, which requires prevention and intervention from a social, public health, legal and human rights perspective. As the recently published book Abuse and Neglect of the Elderly in India by Springer (2018) and studies done by UNFPA, HelpAge India, Agewell Foundation and few experts with interest in ageing section of the population point out the growing menace of elder abuse cuts across rural urban areas, socio-economic groups and different communities. With startling number of elders facing abusive conditions clearly older people deserve justice with a strong public stand against elder abuse. There is need for a multifaceted response to stop it and build a sense of responsibility in society to provide a safe and secure environment for older people. With certain estimates indicating that anywhere from 2 to 10 per cent of older people are being abused in society on every day basis and this is only a part of the picture as a large number of cases go unreported and unrecognised, there is a strong voice among advocates for the rights of older people not only to stop elder abuse but also to raise awareness of the cultural, social, economic and demographic processes affecting elder abuse and neglect.

As a response to combat the problem, there is a need in the country for immediate commitment to develop sound legislation that will uphold the rights of vulnerable older people. The mechanism to seek justice under Section 125 of the Criminal Procedure Code 1973 requires modifications which support older people for quick and adequate provisions for maintenance and grant of appropriate care and facilities from children, such as provision for food, clothing, residence and medical attendance as well as treatment. It is a good initiative of the ministry of social justice and empowerment, the nodal agency under the Central government to draft the amendments to the Maintenance and Welfare of Parents and Senior Citizens (MWPSC) Act 2007 to make it more comprehensive and conducive to the interests of older people. The draft amendments do need certain further considerations and clarifications. Many civil society groups are contributing towards improving its impact and utility for older people. It is hoped that the new law after amendments will work for older people and enable them to secure their rights to a life of dignity and investigate thoroughly the conditions, which lead to the abuse, abandonment and mistreatment by their children.

In addition, institutional care provisions for older people must also deliver quality care and stop abuse and neglect. Many older people are not aware that old-age homes can be sued for non-compliance of their liability and obligation to take care of their resident older people. Through the Indian Contract Act 1872 and the law of “torts” whereby for any mistreatment and failure in caring, a civil suit can be filed against the management of the institution for the breach in contract to care, even though there might not be a written contract and damages can be claimed for the wrong done. There is need to take seriously the provision in the Indian Penal Code under which, breach of contract may attract criminal liability against old-age homes and senior citizens housing complexes.

We need to focus on minimising harm to older people and have interventions that support them being at the centre of any decisions for their well-being. Our country needs mechanisms, which empower older people to know their rights and exercise them to demand quality living conditions to a life of respect and dignity. There is very little information available to older people that safeguards them and informs them about provisions in the country which can equip them to deal with their lives. It is vital that older people are supported — and feel supported — by the law, government, community organisations, service providers, carers, peers and their family and friends.

The writer is associate professor, department of sociology, Maitreyi College, University of Delhi, with specialisation in health, gerontology and development studies. Email LittleThingsMatter@gmail.com