According to wildlife experts, this is the first time such inter-species bonding has ever been recorded. 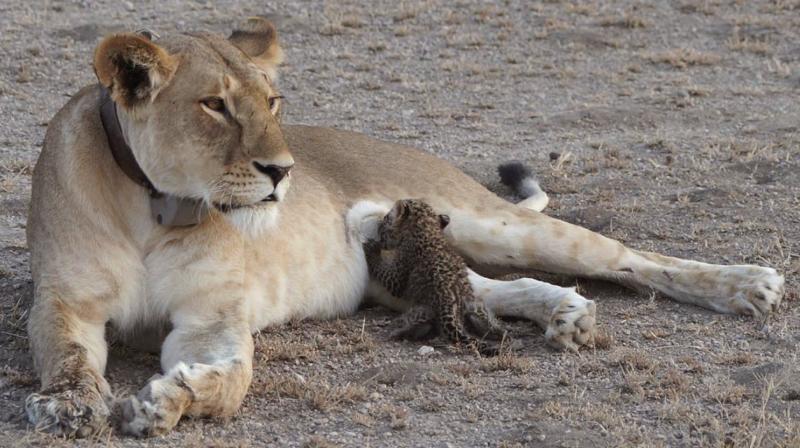 In this Tuesday, July 11, 2017 photo supplied by Joop van der Linde, a leopard cub suckles on a 5-year-old lioness in the Ngorongoro Conservation Area in Tanzania. In the incredibly rare sight, the small leopard, estimated to be a few weeks old, nurses in the photographs taken this week by a guest at a local lodge. (Joop van der Linde/Ndutu Safari Lodge via AP)

Johannesburg: An incredible image of a wild baby leopard drinking milk from a lioness at Serengiti in Tanzania has emerged, leaving everyone spellbound.

Most lionesses would perhaps kill the baby leopard as a direct competition to its food source experts believe, but not this lioness, whose maternal instincts seemed to have kicked in as she nursed the leopard cub.

Wildlife experts say this particular inter-species suckling has never been seen before.

The images are an incredibly rare sight where the leopard cub is seen suckling on a lioness who is believed to have given birth to a litter last month.

The five-year-old lioness lies unperturbed as the small leopard, estimated to be a few weeks old, nurses in the photographs taken Tuesday by a guest at a lodge in the Ngorongoro Conservation Area.

Ingela Jansson, head of the KopeLion conservation group, said Thursday that the lactating lion, fitted with a GPS collar so that researchers can track her, may have lost her own cubs and therefore was open to feeding the leopard cub. The leopard, meanwhile, appeared to have lost contact with its mother.