There are also several inspirational stories of women making a success of their political careers against all odds. 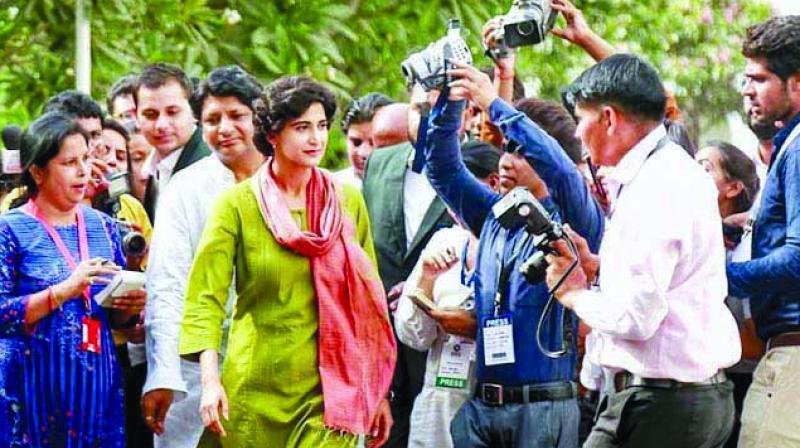 Women were often raised with a certain taboo about not doing certain things that were considered to lie in the male domain.

The voice of women worldwide is no longer muted these days. Many political parties have women in a key role. There are also several inspirational stories of women making a success of their political careers against all odds. This is reflected in many ways, such as recent research which has shown that the number of drinking-water projects in areas with women-led administrations are 62 percent higher than in regions with councils led by men.

Women were often raised with a certain taboo about not doing certain things that were considered to lie in the male domain. One of these was politics, although several women in our own country broke through these bastions to make their presence felt in the political arena. Today, women’s participation in Indian politics is slowly growing. It was low during the 1990s, at approximately 12 percent.

In 1994, there were major changes, with 33 per cent of seats in local governments reserved for women and them being thus more actively involved in policy making and forming their own political parties.

As a result, the participation of women in politics has risen to 14.3 per cent over the last three decades. And yet, it’s true that although the political scenario for women is improving these days, there’s still a lot of scope for change.

Shanthala Damle, state Co-Convenor of Aam Aadmi Party Karnataka says, “Women leaders will be elected by women voters because the thoughts and beliefs match one another. Since the voters can easily approach their representatives with their concerns, the preference for women condidates is high. The huge challenges that women politicians face is higher than that of what a male politician does.

But, with an increase in women candidature, these challenges can be tackled with. It is very important for women to enter Indian politics, especially to deal with issues like corruption. Also the hereditary plans of the leaders in their posts will have their kids ready to contest.

So the new age parties with defined policies and strategies are strong and are concerned with what the public needs.”

Miriam Joyce Stewart, who works in an MNC and is inspired by writer-activists Rana Ayyub and Arundhati Roy, says, “The current political scenario demands the presence of strong, politically active and aware women. Women might also do the politics differently. They prioritise issues which men may have put on the back burner. Their modus operandi might also be different, considering that they don’t have a level playing ground to begin with.”

She also asserts, “I don’t want my existence to be silenced. And to prevent that, I need to be politically active, and know about who is deciding the fate of my country, state and gender. And women empowerment for me is being able to decide and do what makes me more confident. If I find that my career empowers me, I want to focus on that without being questioned about the whys and the hows. If I feel empowered being a stay-at-home mom, I want to do that without being questioned about my career.”

While women may be fired up with fervour, the reality is that men must also learn to accept the new normal.

Subham Mukhopadhyay observes, “Perspectives are changing but there is still a long way to go. Women still face resistance when it comes to male subordinates taking orders from them. Although technically taboo, many people still believe that a woman cannot be commanding them.”

But, he says, once women manage to break these shackles of stereotypes, they rise through the ranks and are able to command the respect of everyone they work with.

“For example, the late Sushma Swaraj was one of the greatest leaders, in my opinion; she helped a number of people with their immigration issues and literally was a ray of hope for all,” he points out.

We hope that her career, and that of all the other women who made it to the top with such difficulty, will serve as a beacon of hope and inspiration to other would-be women politicians in India and smooth the rocky road for them.