Feet of spiritual gurus and gods have always been worshiped in different cultures and religions, what makes them divine? 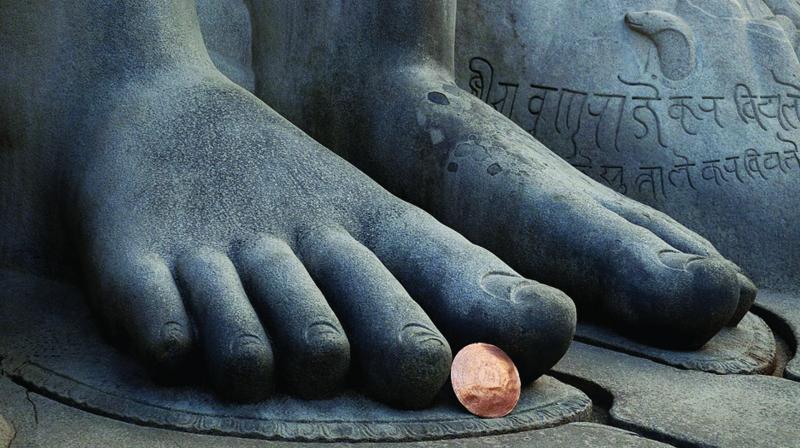 When we bend down before our gurus, it is not only a mark of submission of ego — it also facilitates the formation of a subtle transmission of energies.

A few days back the padukas of Shirdi Sai Baba were brought to Chennai before being taken to other cities in India as part of events in the run-up to the centenary of his samadhi. The crowds that thronged the mandap were unbelievable. People waited patiently for their turn at a fleeting glimpse of the rosewood coloured padukas that touched his feet — the feet that walked this earth and through which miracles were wrought, such as the one witnessed by an ardent devotee Das Ganu who was about to set out on a pilgrimage to Prayag and was treated to a spectacular vision of the Ganga and Yamuna flowing from the base of Sai Baba’s big toe on the right foot.

Why are feet so important in spirituality? When the ocean of life gets too rough and choppy salvation can only be obtained by clinging to the Lotus feet of God and his avatars who help us negotiate the stormy seas with guidance and direction. Lord Vishnu’s feet are believed to contain many symbols like the conch, fish and disc — to remind us of many things. Fish cannot live without water, just like devotees without the Supreme. The disc helps destroy enemies (negative qualities )and the conch contains water to put out the fire (material desires).

In many spiritual traditions, it is believed that the body and soul are connected and even embodied in the soles of the feet. The Vishnu Pada temple in Bodh Gaya, Sri Vari Padulu in Tirumala and Rama Padam in Rameswaram remind us of when the Gods stepped on this earth and left their footprints.

When we bend down before family elders, our gurus and well-wishers and touch their feet with our hands crossed (so that one’s right hand touches the right foot of the person whose blessing one is seeking and left hand touches the left foot), it is not only a mark of total respect and complete submission of the ego — it also facilitates the formation of a circuit and a subtle transmission of energies from the giver to the receiver. The giver, of course, constantly recharges and renews his energies from a higher power and it is never depleted .

When Lord Ram was banished to the forest, Bharat asked for his padukas and installed them on the throne — a gesture that was so symbolic.

Apart from touching the feet the washing of the feet is a ritual that is at once purificatory and deeply meaningful. In Hindu weddings, during the Kashi yatra ritual, the feet of the bride and groom are washed by the parents -in-law or brother -in-law as he is persuaded to stay back, tie the knot and live the life of a grihastha (householder). The couple too pay their respects to their parents by washing their feet and adorning them with turmeric, vermillion and flowers and seek their blessings.

In the Bible, we read of Jesus himself washing the dusty feet of his disciples (as no servants were around) by placing them in a basin of water and wiping them dry with a towel wrapped around his waist, before the Last Supper. He impressed upon his disciples that since he — their Lord and teacher — had washed their feet, they too should follow him in servanthood and do the same for one another. It was an act which would definitely earn them blessings.

The writer is a Reiki channel, yoga practitioner and a spiritual seeker