Brothers with a mission

Two Chennai-based teenagers blaze a trail of activism in support of nature and the underprivileged. 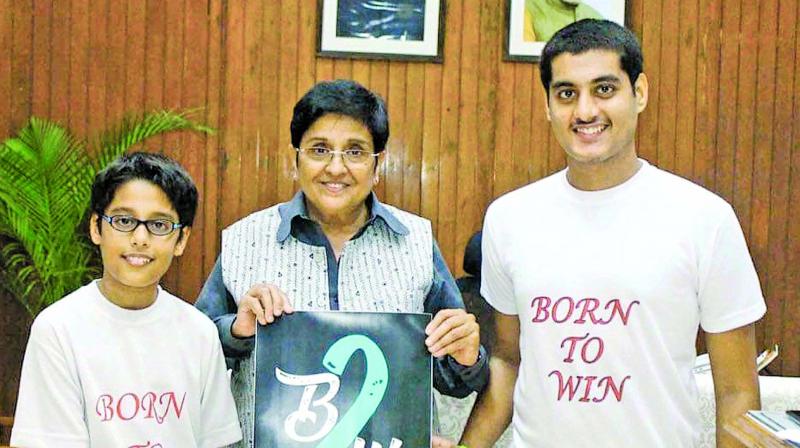 Seventeen-year-old Jai Aswani and his 13-year-old brother Preet belong to the rare breed of doers in this world. The teenaged boys have already achieved a great deal in their campaign to better both the environment and the lives of the underprivileged.

It all started with a Say No to Crackers mission during Diwali 2012, an idea given by a teacher at the Look N Learn Jain Gyan Dham - a modern day patshala (traditional school). With the backing of his parents and encouragement from teachers, Jai forayed into social service. And Preet has been a constant source of support. They went from strength to strength, from social cause to social cause.

The year 2018 was an eventful one for the Aswani brothers. It included a 140-km marathon to create awareness on women's health, a campaign to collect six tonnes rice for orphanages and old age homes, and a project to push for the replacement of plastic bags with cloth carry bags made by mentally challenged women.

It was the mindful upbringing that these two children enjoyed that has given them such a good understanding of the issues facing the world and its inhabitants. The two have an as-yet-unregistered NGO called Born to Win (B2W).

Their work has not gone unnoticed. Jai has been conferred the "Young Achiever Award" by Bharat Niram, Delhi, and honoured with "The Crest" by the Indian Coast Guard. Preet, an ardent robotics fan, bagged the first prize at the Children's Climate Conference, 2020, recently held in Delhi, for developing a robot which can clean trash.

Jai and Preet are part of a generation of young people led by such brave warriors for nature and peace such as Greta Thunberg and Malala Yousafzai, a generation eager to do its bit towards making this world a better place for every living creature. May their tribe increase!