A swim against the tide

City kids return triumphant from their swim across the Bangladesh channel, making them the youngest to have achieved this feat. 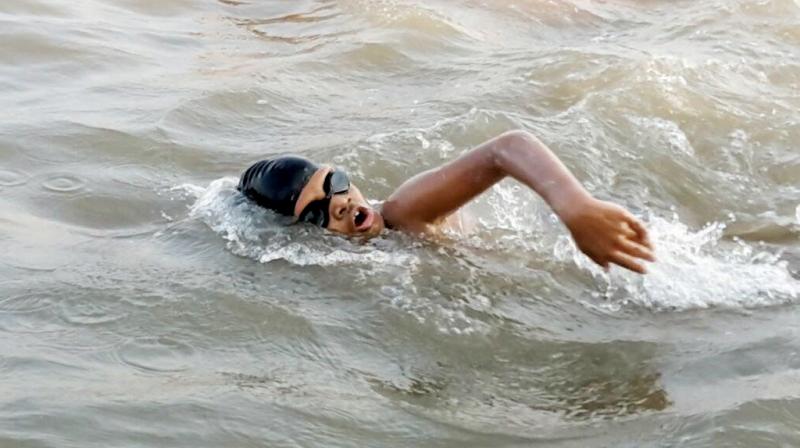 The phrase ‘age is just a number’ is more than just your overused cliché, as proved by three kids right here in the city. On Sunday, 10-year-old Vedant Sawant, and 11-year-olds Raj Patil and Dolly Patil swam across the Bangladesh channel from Teknaf Fisheries Jetty to Saint Martins’ Island Jetty in Bangladesh, making them the youngest people to have crossed any international channel. The trio crossed roughly 16.1 km, in around four hours time.

Raj, whose father Santosh Patil, is also the secretary of Open Water Sea Swimming Association, which the kids were representing, as well as the trio’s coach, is overwhelmed at the reception he has received upon returning from his adventure. “I knew that the three of us could do this. There was never any doubt in my mind. I finished the swim in four hours and 37 minutes,” says Raj, who has been learning swimming since he was six years old. “We chanted Chhatrapati Shivaji’s stotra and dived in for extra motivation,” he adds.

Coach and proud father Santosh says that the kids had to undergo rigorous training for four months in preparation for the swim.

“The kids trained in their local gyms and fitness centres as well as in the open seas. They also had separate workout regimes and ran everyday to prepare for the swim. The Bangladesh channel is an internationally recognised water body by the World Open Water Swimming Association, and Raj and the others are now Limca Book of Record holders for being the youngest team to swim across the channel,” he says, adding that the entire thing has been funded through a bank loan, since no one was willing to sponsor the kids to start with.

Though the team has not had any form of support from Indian sponsors, it would seem that Bangladesh is more open to helping out. “You need a lot of money for getting the Visa, since it’s international waters, and then money is needed for a boat that has to go along with them and other equipment. Since I did not get any sponsors, I took a loan from the Naval bank (as I am in the navy), and now have sent the papers to the Bangladesh Everest Academy. They have helped us a lot in our endeavour and will hopefully sponsor the swim as well,” he explains.

For Raj, though, the journey has just begun. “I am looking forward to swim in other channels in future. I want to swim in the Hong Kong Channel and then even in Africa,” he says.

As someone who enjoys swimming everyday, the 11-year-old is looking forward to the simple joy of diving into open waters again. “I am sure that I will see Dolly and Vedant again soon, and we shall all swim together again,” he smiles.