Much ado about assets!

Ultimately it is the people’s money that somehow ends up in the pockets of netas and babus.

The BJP came out with its guns blazing on P. Chidambaram and his kin with regard to certain properties allegedly owned abroad but which were reportedly not declared in India. The Defence Minister fired the heavy artillery only to face the riposte by lawyerly mocking from the former finance minister saying she should become an Income-Tax lawyer. The Congress got into the argument asking why not the government go about bringing back all black money from abroad and putting fifteen lakh rupees in each Indian’s bank account as promised before the 2014 polls.

Tweeple had fun at this high profile confrontation with many wondering why if the BJP was in power for four years its sleuths have not been able to prove the allegations and put PC on the rack like it has done Lalu Prasad, Sasikala and other corrupt politicos with a proven inclination to put the hand in the ‘galla’. Most were guessing that since PC is the fiercest critic of PM Narendra Modi, the NDA economic policies and all things BJP that he and his kin have become constant targets of government investigating agencies. Meanwhile, a statement from PC and kin says all assets of the Chidambaram family are duly recorded in the books of accounts and reflected in all statutory and regulatory filings.

The open house has been fun for twitterati as the biggest politicos gun for each other with vitriol, mocking satire and good old fashioned cussing. Ultimately it is the people’s money that somehow ends up in the pockets of netas and babus. 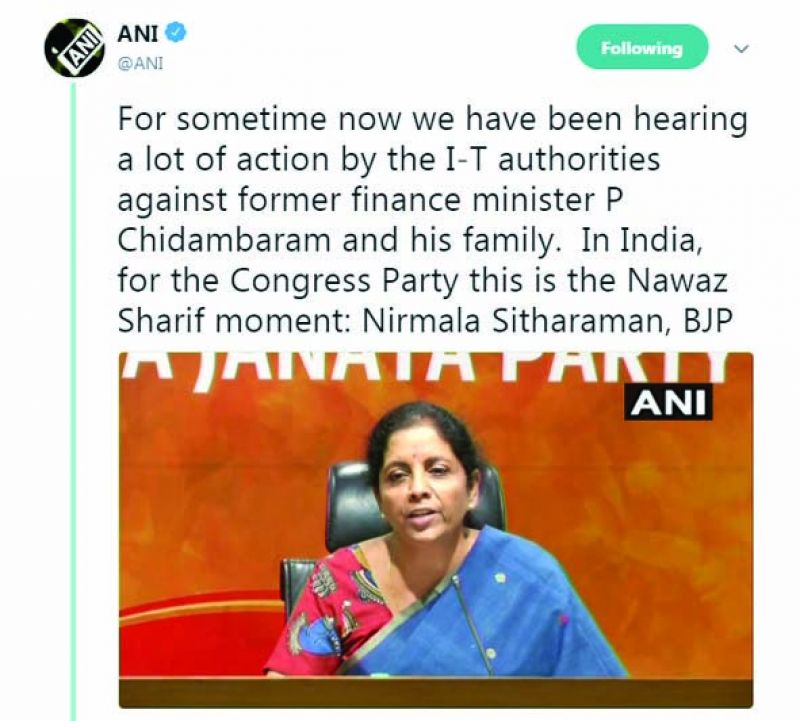 P. Chidambaram@PChidambaram_IN
The buzz in Delhi is that Ms Nirmala Sitaraman will be removed as Defence Minister and appointed as lawyer of the Income-tax department. Welcome to the bar, Ms Sitaraman.

The president of the richest political party in India is dreaming of billions of dollars! Bring the money back and put Rs 15 lakhs in the account of every Indian as you promised.

Amit Shah@AmitShah
Under the Black Money Act, 4 chargesheets have been filed against P Chidambaram and his family for possessing and operating several illegal assets and accounts in foreign countries. IT estimates illegal assets held by UPA's FM to be to the tune of 3 Bn dollars! #BlackMoneyOfPC

This explains why despite Supreme Court's orders Sonia Gandhi, former PM Dr Manmohan Singh & then FM P Chidambaram dragged their feet on formation of SIT, one of the first decisions taken by Modi govt, to fight Black Money! How could they indict their own selves? #BlackMoneyOfPC

sreekumaran m nair@meyilliate
Ma'am in India so far we have not seen any serious action by govt2wean out corruption,including your present govt of BJP! Reason is all politicians are some way or other are involved! Aam aadmi lost faith in democracy of Indian way. Pl b practical!

Nachiketa Jha @nachiketajha
Why BJP is reacting like an opposition? It's their govt. They can push investigating agencies in motion. Also, as if, BJP will only act when @RahulGandhi will say them yes. @nsitharaman mam, plz focus on China. For u and us that is a very big concern

Pundir M.M Singh @mmspundir
Nirmala ji u know your gain in numbers is not due to your work for the country nd the same is big zero...your gain is cursing nd blaming Congress for everything..If Rahul is due to his purkho than u also there due to mass number of murkho

Mohan@mohan71105
No one is stopping BJP Govt from acting against P Chidambaram. Not even P Chidambaram has requested BJP or Modi ji to slow down investigation. Rather he is
challenging Modi ji everyday on Twitter. So, act n don't waste ppl's time with such statements

BJP@BJP4India
Congress President Rahul Gandhi, who is himself out on bail should come out and tell us if he is going to investigate this case involving one of his leaders: Smt @nsitharaman #BlackMoneyOfPC

@anuradha_dighe
And here comes another one of Union Cabinet Minister Dolls of Modi-ji presenting today's episode of Saas-Bahu-Sazish once again telling us how Cong,Rahul& his great-grand-father Nehru are responsible for last 4 years of
pathetic non performance of Modi Govt

suman maitra@suman_maitra59
Nothing about own Ministry, performing as FM /BJP spokesperson or a troller, feeding some rubbish for the cheerleaders of paid media. Why blowing so much '0' corruption bugle. U r in power; arrest the guilty and punish as per law. Single agenda; politicize each & every issues

Aapki Navika@KumaariNavika
Sad to see the Defence Minister @nsitharaman become the
mouthpiece of @arunjaitley - the most inept, bumbling Finance Minister any nation has ever seen

Alwyn@alwynmithra1992
Nawaj Sharif is in jail because of Panama scandal. What action have you taken against those Indians whose name has appeared on Panama leak? You have fooled us enough, but not anymore @nsitharaman