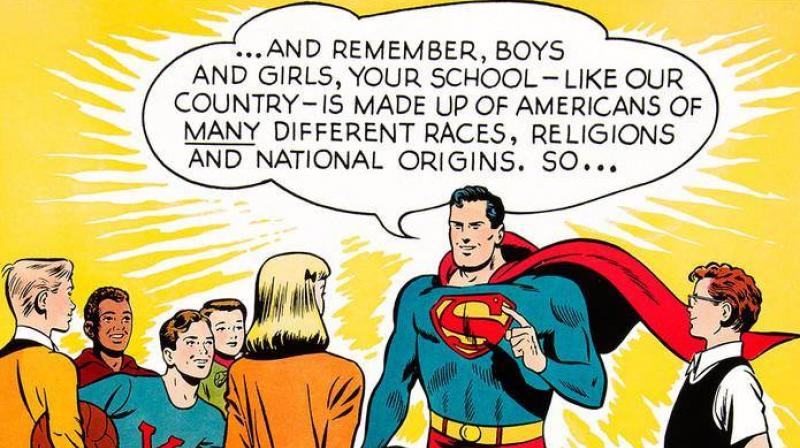 In the latest edition of the "Action Comics" series, which has published Superman's adventures since 1938, the "Man of Steel" intervenes to stop an out-of-work factory worker as he is about to kill some immigrants.

Wearing a blue work shirt and red-white-and-blue bandana, the moustachioed cartoon villain embodies all the cliches of the poor blue-collar American.

Gun in hand, he threatens veiled women and rails at Hispanic workers, accusing them of stealing his job.

"You work cheap, don't speak English so you can't talk back or even ask for a penny more. You cost me my job! My livelihood! For that… you pay!" he says, as he opens fire.

Just then Superman steps in, bullets bouncing off his chest, to save the day.

"The only person responsible for the blackness smothering your soul is you," Superman tells the white supremacist.

In August, a 32-year-old woman was run over and killed by a Nazi sympathizer after a violent "Unite the Right" rally in Charlottesville, Virginia.

Marvel Comics, for instance, launched a new version of Spider-Man in 2011, making him half-black, half-Hispanic.

In it, Kal-El (Superman's real name) struggles to reconcile his extra-terrestrial origins with his new life on Earth.

Superman is in effect an immigrant, who left his doomed home planet Krypton when he was a baby and was taken in and adopted by an American couple in Kansas, in the rural US heartland.

Superman's creators, Jerry Siegel and Joe Shuster, were both Jews of European descent, and Superman's story parallels the flight of European immigrants in the 1930s seeking peace and prosperity in the United States.

"The Man of Steel," whose caped costume is inspired by the Stars and Stripes, grows up on a farm and embodies the American dream

But Superman's patriotism, like that of Marvel Comics' Captain America, has been interpreted differently at the hands of the various writers who have scripted his adventures.

In the 1986 series "Batman: The Dark Knight Returns," for example, Frank Miller presents Superman as president Ronald Reagan's elite fighter, deployed to combat the Soviets or to restore order in the United States, neutralizing Batman.