When Bobrowski went to pay for his meal, the staff told him he was no longer welcome. 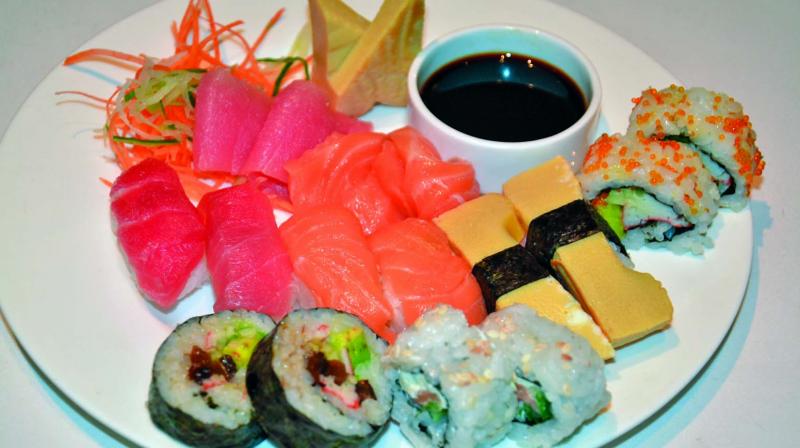 Bobrowski said none of the restaurant staff raised any qualms during his mammoth meal, but it was when he got to the till that he sensed trouble.

In a bizarre turns of events, a German triathlete has been banned from an all-you-can-eat sushi restaurant after he ate too much sushi.

Jaroslav Bobrowski, 30, paid just 16 euros for his meal at Thai Thuna last weekend as part of the deal, before munching down 100 plates from the revolving carousel.

However, when Bobrowski went to pay for his meal, the staff told him he was no longer welcome.

Bobrowski, who stands at 5ft 7ins and weighs 12st 4lbs, told Passauer Neue Presse that he is on a special diet in which he fasts for 20 hours a time.

In the remaining four hours he stuffs himself 'until I am full', he said.

When the time to break his fast came, Bobrowski headed for the restaurant in Landshut, Bavaria.

Bobrowski told Bild that none of the restaurant staff raised any qualms during his mammoth meal, but it was when he got to the till that he sensed trouble.

Trying to make amends, he offered them a sizeable tip to make up for the excess food he ate - but it was rejected.

Instead, staff told him to get out and never return.

Talking to the newspaper, 25-year-old host Tan le said, “He eats for five, that's not normal.”

The story emerged after Bobrowski posted a complaint on Facebook that subsequently went viral, making news all over Germany.

He has even been dubbed sushi-man and the sushi-wolverine after scoffing down so much food in one sitting.