The juvenile narwhal—identifiable from its tusk and grey spots—was filmed by marine biologists over the summer. 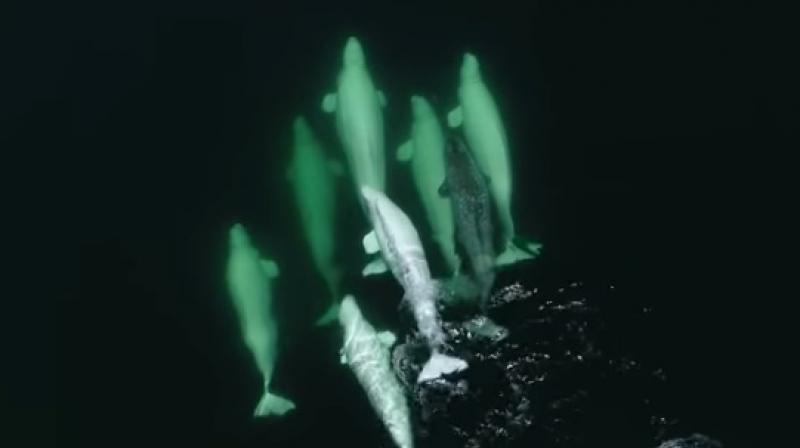 Their interactions, rolling and rubbing against each other near the water's surface and flashing their genitals, for example, suggests the narwhal has been fully accepted by the pod.(Photo: Youtube Screengrab/ AFP)

A lonely narwhal that strayed far from its Arctic habitat has apparently found a new family in a pod of belugas in Canada's Saint Lawrence River, a marine conservation group said Thursday.

The juvenile narwhal—identifiable from its tusk and grey spots—was filmed by marine biologists over the summer, swimming closely with about 10 white beluga whales.

Their interactions, rolling and rubbing against each other near the water's surface and flashing their genitals, for example, suggests the narwhal has been fully accepted by the pod, said Robert Michaud, director of the non-profit Group for Research and Education on Marine Mammals (GREMM) in Tadoussac, Quebec.

"He's found buddies," Michaud told AFP. "And they're treating him now like he's just one of the boys."

Narwhals live in the Arctic waters of Canada, Norway, Greenland and Russia, and don't normally range so far south.

This one was first spotted with the belugas in 2016 and again in 2017. Video of the whale with its new family was finally captured when GREMM researchers used a drone in July to get greater insights into the group's odd dynamics.

The Saint Lawrence beluga population is the most southern of the species and is listed as endangered.

While beluga and narwhal habitats overlap in parts of the Arctic, and the animals are closely related it is rare to see one species interact with the other.

Young whales tend to wander. When unable to find their own kind, these very social creatures have been known to try to make friends with buoys or boats—at times risking fatal injury from propellors.

Michaud said it was "lucky" that this narwhal was taken in by the belugas as other young whales with wanderlust often "end up in difficult situations."

At this age, around five or six years old, young male belugas learn social graces and life skills from each other, and form bonds with other males that will carry into adulthood—which narwhal are not known to do.

"For this young narwhal to right now survive he needs contact with others, he needs buddies," Michaud said.

"Effectively he is learning how to be a beluga whale," he added with a laugh.

"How will it turn out? Narwhal and beluga live up to 60 years. So it'll be a long story to follow. Stay tuned."