Both the Sribhumi Sporting Club and the Md Ali Park puja committees modelled their pandals on the famous Chittorgarh fort of Rajasthan. 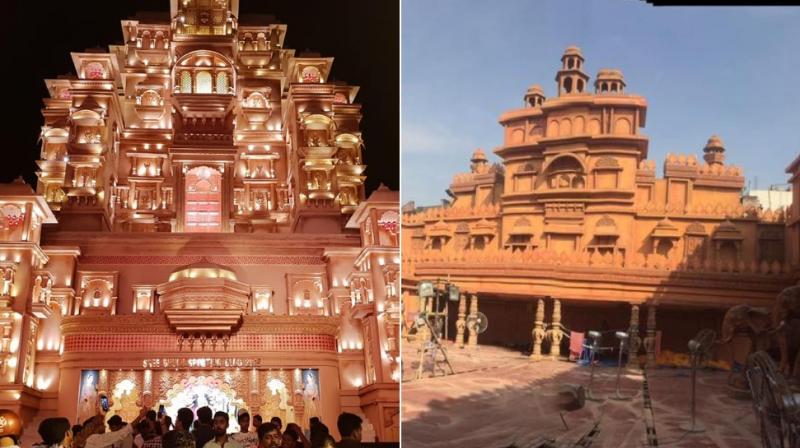 The theme was chosen to deliver the message that Bengal stands for tolerance and peace. (Photo: Facebook Screengrab)

Kolkata: The Chittorgarh fort as seen in the period film 'Padmaavat' was recreated by two crowd-pulling Durga Puja pandals here.

Both the Sribhumi Sporting Club and the Md Ali Park puja committees modelled their pandals on the famous fort of Rajasthan, but the idea behind it was different, officials of the two organisations said.

When anti-Padmaavat protesters threatened to stall the film's release all over the country in January, the film maker was assured of security by West Bengal Chief Minister Mamata Banerjee and the film had a smooth run across Bengal, Sribhumi Sporting Club president and MLA Sujit Bose said.

The Sanjay Leela Bhansali film created controversy during its making as well as before its release with several Rajput organisations claiming that the film distorted history. The film sets were damaged more than once and the director was assaulted.

"The theme was chosen to deliver the message that Bengal stands for tolerance and peace," Bose said.

The setting of a song sequence in 'Padmaavat' in the backdrop of the Chitorgarh fort was recreated at the Sribhumi pandal while lighting helped in creating the effect.

The puja was inaugurated by the chief minister before Mahalaya.

The Md Ali Park puja committee created a small replica of the entire Chittorgarh fort in its golden jubilee year.

The Chittorgarh fort, which is associated with the story of Padmavati, is regarded as the symbol of Rajput chivalry, resistance and bravery, the puja committee secretary Ashok Ojha said.

"We wanted to remind the people about that history," he said.

Models inside the pandal donned the costumes worn by the characters of the film which was released in January this year.

On 'Padmaavat' being the theme of two puja committees in the same year, Ojha said, "this is coincidence. The purpose of all puja committees is to introduce people to art works, make them happy and enjoy puja festivities."