Wearing aprons printed with such messages as “Kiss the HIV+ cook” and “I got HIV from pasta. 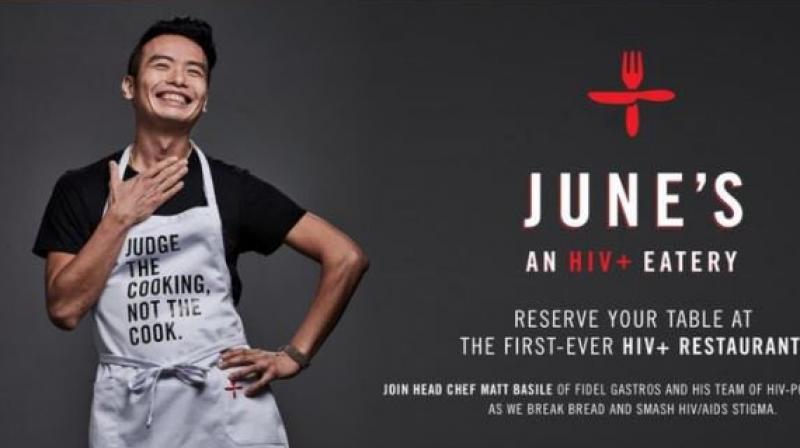 Located in Toronto, the restaurant called June’s on Tuesday was serving its first meals prepared by HIV-positive cooks. (Photo: Twitter/BakedAlaska)

A group of Canadian gourmets is hoping to smash misconceptions about HIV transmission one plate at the time by opening a pop-up restaurant run entirely by staff infected with the virus.

Canada has a new restaurant staffed entirely by HIV+ chefs to “smash stigma.”
You’re a bigot if you don’t want to catch AIDS from your food. pic.twitter.com/QTr9Wbyn3i

Located in Toronto, the restaurant called June’s on Tuesday was serving its first meals prepared by HIV-positive cooks to dispel any notion that food preparation can spread the virus.

Wearing aprons printed with such messages as “Kiss the HIV+ cook” and “I got HIV from pasta. Said no one ever,” June’s 14 HIV-positive cooks will be serving customers who prepaid to reserve their tables.

The idea of June’s came in response to a survey last month that found only half of Canadians would eat food prepared by someone with HIV.

The survey was conducted by Casey House, a non-profit that planned the pop-up, or temporary, restaurant, said the group’s head Joanne Simons. Casey House provides health care for people with HIV/AIDS.

HIV is spread when infected fluid enters the bloodstream, but not by sharing food, according to health authorities.

The tickets sold out in less than two weeks and, with such strong demand, another restaurant run by HIV-positive staff may be in the offing, she said.

“We’d love to be able to do it in places like New York and San Francisco and London,” Simons told the Thomson Reuters Foundation.

The menu features such items as northern Thai potato leek soup and ginger-bread tiramisu, she said.

Since 2005, HIV incidence in Canada appears to be declining, according to a 2015 report by the Public Health Agency of Canada.

Worldwide, since the beginning of the HIV/AIDS epidemic in the 1980s, more than 70 million people have been infected with the HIV virus and 35 million died, according to the World Health Organization.