Cornelia Sorabji was the first woman to practise law in India and Britain. 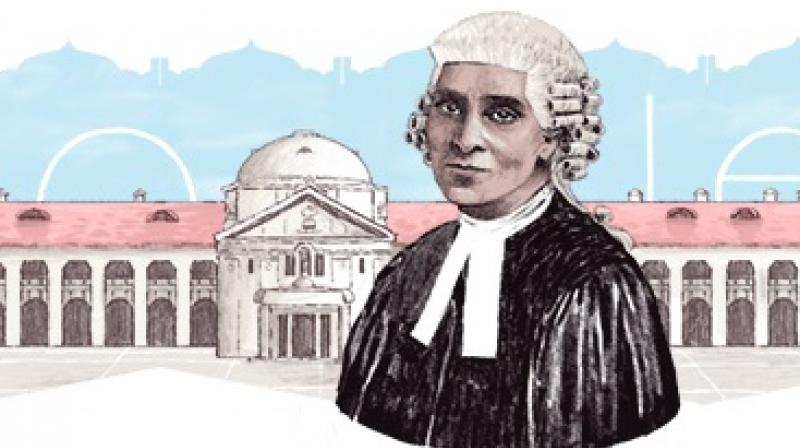 New Delhi: Google on Wednesday paid its tributes to Cornelia Sorabji, India's first woman lawyer, through a dedicated doodle on the occasion of her 151st birth anniversary.

Cornelia was born in Nashik as one among nine children to Reverend Sorabji Karsedji and his wife, Francina Ford, who had been adopted and raised by a British couple. She enrolled in Deccan College, and claims to have topped the Presidency in her final degree examination, which would have entitled her to a government scholarship to study further in England.

However, according to Sorabji, she was denied the scholarship, and instead took up a temporary position as a professor of English at a men's college in Gujarat. After becoming the first female graduate of Bombay University, Sorabji wrote in 1888 to the National Indian Association for assistance in completing her education. This was championed by Mary Hobhouse (whose husband Arthur was a member of the Council of India) and Adelaide Manning, who contributed funds, as did Florence Nightingale, Sir William Wedderburn and others.

Sorabji thus arrived in England in 1889 and stayed with Manning and Hobhouse. In 1892, she was given special permission by Congregational Decree, due in large part to the petitions of her English friends, to take the Bachelor of Civil Laws exam at Somerville College, Oxford, thereby becoming the first woman to ever do so.

Upon completing her education and returning to India in 1894, Sorabji was involved in social and advisory work on behalf of the purdahnashins or women, who, according to Hindu law, were forbidden to communicate with the outside male world.

In many cases, these women owned considerable property, yet had no access to the necessary legal expertise to defend it. In this regard, Sorabji was given special permission to enter pleas on the behalf of the purdahnashins before British agents of Kathiawar and Indore principalities, but she was unable to defend them in court since, as a woman, she did not hold professional standing in the Indian legal system.

Subsequently, Sorabji presented herself for the LLB examination of Bombay University in 1897 and pleader's examination of Allahabad high court in 1899. However, despite her successes, Sorabji would not be recognised as a barrister, unless the law that barred women from practising was changed in 1923.

Sorabji began petitioning the India Office in 1902 to provide for a female legal advisor to represent women and minors in provincial courts. In 1904, she was appointed Lady Assistant to the Court of Wards of Bengal and by 1907, due to the need for such representation; Sorabji was working in the provinces of Bengal, Bihar, Orissa, and Assam.

It is estimated that over due course of time, Sorabji helped over 600 women and orphans fight legal battles, sometimes at no charge. She would later write about many of these cases in her work Between the Twilights and her two autobiographies.

In 1924, the legal profession was opened to women in India, and Sorabji began practising in Kolkata. However, due to male bias and discrimination, she was confined to preparing opinions on cases, rather than pleading them before the court.

Sorabji retired from the high court in 1929, and settled in London, where she eventually passed away on July 6, 1954.