Quizzing their way to prizes

Patrons in the city are now opting for alternate options of recreation, one of which is quiz nights. 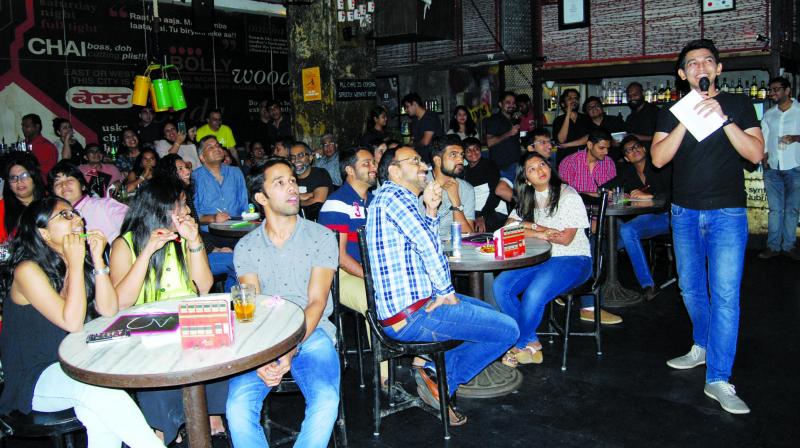 Tilak Shah (with the mic) hosting one of his quiz evenings

The quintessential idea of winding down is visiting a pub after work for a couple of drinks. While it undoubtedly helps one de-stress, it is wrong to say that it doesn’t have repercussions (both health and pocket-wise). Patrons in the city are now opting for alternate options of recreation, one of which is quiz nights.

Now, quiz nights in the city isn’t exactly the newest form of recreation around. Pubs and bars have seen the appeal in rounding up clients, who enjoy a fun game of testing their general knowledge, in return for free beers. However, a few of them are now seeing the appeal in tapping this beer-loving, quiz-playing crowd for a more serious night of working your grey cells.

Take for example Tilak Shah’s Sports and Bollywood Quiz Night, a weekly affair at 3 Wise Monkeys in Khar. He describes the quiz as a way of getting sports junkies and Bollywood fanatics to join forces for four rounds, spread across the night. Besides bragging rights, the winner gets goodies like T-shirts, movie tickets, fashion accessories and more.

And at the end of the series, which is supposed to wind up on December 28, the finalist walks away with a stay in a swanky hotel in Lavasa. 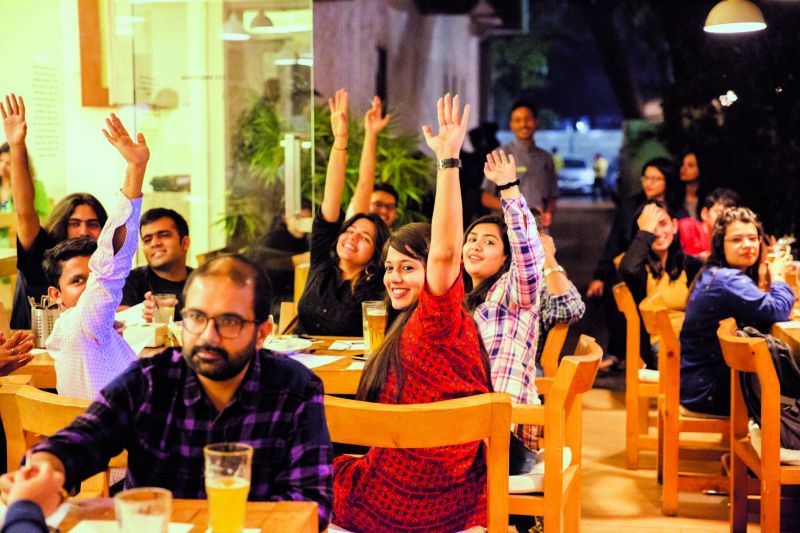 A quiz hosted by VV Harish in progress

Quiz Tilak on how he came up with an idea to host this event and he says that till about a year ago, he was busy hosting corporate events, when inspiration struck him, as he learned about quiz nights in the UK. “I wanted to bring that practice here,” says Tilak, who hosts several quiz nights in the city.

It’s all about keeping it light and relevant, for most quizmasters in Mumbai. For V.V. Harish Kumar, the founder of Thinq2win, a gaming company that’s organising an all-day quizzing festival, it wasn’t all about just testing the GK of the participants — it’s a lot about including everyone in the game by making it more mainstream and less pedantic. “The idea was to build an interesting quiz around a topic that is relevant to maximum people,” he explains.

The Thinq2win’s festival, Qtopia, which is being held at Doolally, is split into eight rounds with three rounds being run simultaneously. The first round, Harish says, is basically to break the ice. “In Qtopia, the first session is called Sparkq, which is open to all and will have Harry Potter related questions,” he adds.

Another round titled Battle for the Ages has made it compulsory for at least one team member to be under the age of 15 years. “With each team having a child and an adult, the quiz will ask questions about the Mahabharata. The idea was to give parents an opportunity to spend time with the child,” he elaborates, explaining that the pubs won’t be serving alcohol when the underage participants are around.

Tilak’s weekly Sports and Bollywood Quiz, changes venues every week, and is by and large based on three rounds, one of which involves spontaneous dancing of team members to Bollywood songs, which will also decide their winning. The quizzing circuit, which primarily saw students and working professionals, Harish says, is changing now. “Now it has become a social experience. And, womens’ participation has increased too!” he smiles, happy about the turn up.