Born and brought up in Mumbai, Albert says that the celebrations will go on through the night and will continue for next one week. 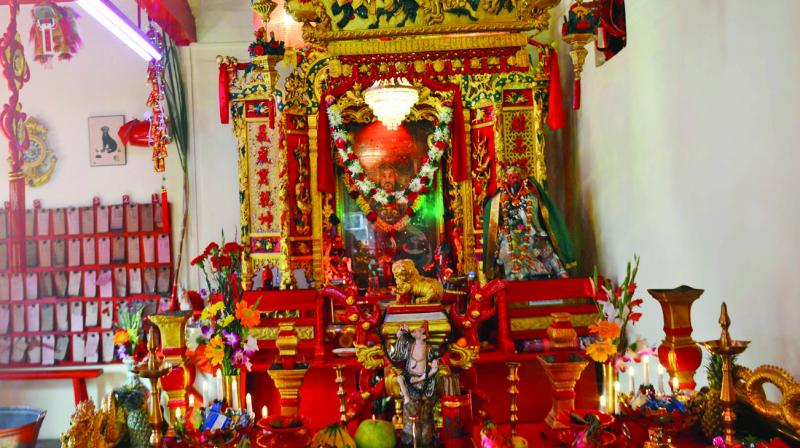 Kwan Kung or the God of War

Strings of lights hang from the Kwan Kung Temple — the only Chinese temple in the city — all set to welcome the Chinese New Year, the Year of the Dog. Numerous incense sticks burned by devotes has filled this three-storey temple with fragrance. Unlike a regular temple, where you are expected to remove your shoes by the door, you can walk straight up to the altar.

While the ground floor houses the Goddess of Mercy; Kwan Kung, the God of War — the famous general immortalised in Chinese history — sits on the top floor of the building amidst the red coloured walls.

This building projects the image of being an ancient temple, and this unassuming place of worship is surrounded by absolute peace. Albert Tham, 66, the caretaker of the temple, tells us that it was once a navy workshop that was brought by the Chinese population in 1919 to build this temple. 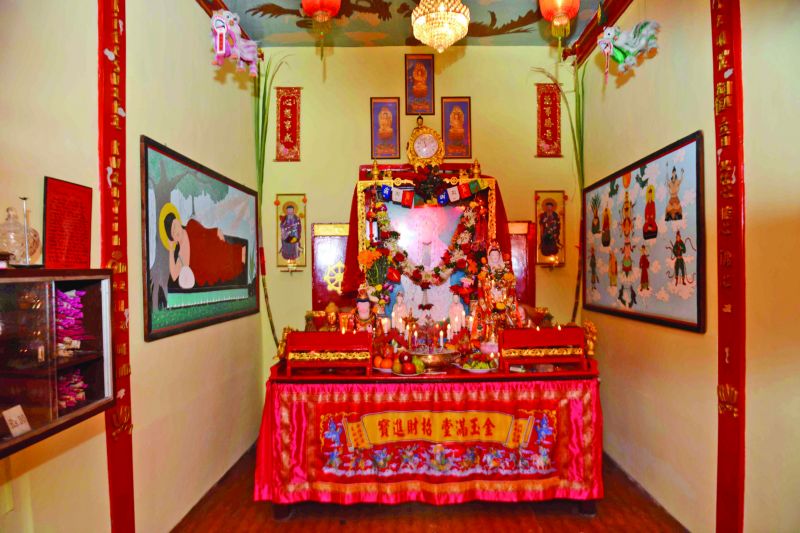 The Goddess of Mercy

Almost 100 years later, the temple buzzes back to life each year around February. Prepping for the eve, Albert places fruits and chocolates on a tray as offerings to devotees coming in to pray. “Worshippers will start coming in around 11 or 12 in the night. They come in, thank God for fulfilling their wish, and ask for another one for this year,” smiles Albert.

Born and brought up in Mumbai, Albert says that the celebrations will go on through the night and will continue for next one week.

The ancient ritual of visiting a Chinese temple, Albert explains, involves burning an incense stick, paper money, and candles. It is believed that as you burn the incense stick and offer prayers, it reaches God. It’s as if the smoke is carrying your fervent, and solemn requests straight to heaven.

According to Chinese beliefs, candles are symbolic of lighting up your life. Paper money — gold and silver prints on paper — are meant to represent wealth or money that is offered to the God. Treated as real money, it is respectfully placed in the bundle of fire.

With just a few Chinese families left in Mazgaon, and the rest having scattered all over the city, the New Year festival is a special time where folks come together to celebrate the occasion. Families bring cooked food and fruits as offering to Kwan Kung, since the Goddess of Mercy is mainly prayed to by women all year round. This, after being offered to the God, is taken back for feasting.

And as any celebration demands, after prayers people go on visiting house-to-house wishing everyone a happy New Year. However, says the caretaker, there are some customs which have been wiped off with time. “In the old days, my ancestors were not allowed to cut nails, wash clothes or hair. But these days hardly anyone follows the tradition,” Albert shrugs.

One custom that still has reminds Albert of his childhood, is that of receiving money (for good luck) in red envelopes from elders. Now it’s a circle of life for Albert. “Now I am an ‘elder,’ so I give money to kids,” he laughs.

Another symbol of the festival is the dragon dance, which was a tradition and hasn’t been practiced through the ages. However, Albert hopes to bring it back. “We revived the tradition last year and will have it this year too,” he smiles.

The dance is another element that is supposed to bring good luck. “Much like trick or treating during Halloween, the dragon then goes door to door and is offered food or paper money to let the good luck in the house,” explains the 66-year-old.

However, with changing times, the zeal of celebration seems to be dying for this minority community in the Maximum City. “These days, people are pressed for time. Earlier, I would witness people flocking the temple as early as 9 pm or 10 pm in the evening. Now, people turn up only closer to midnight. These days, people pray less, and spend a lot more time on feasting and partying,” explains Albert in conclusion.