Hobby horse fans show off their gymnastic skills in Finland. 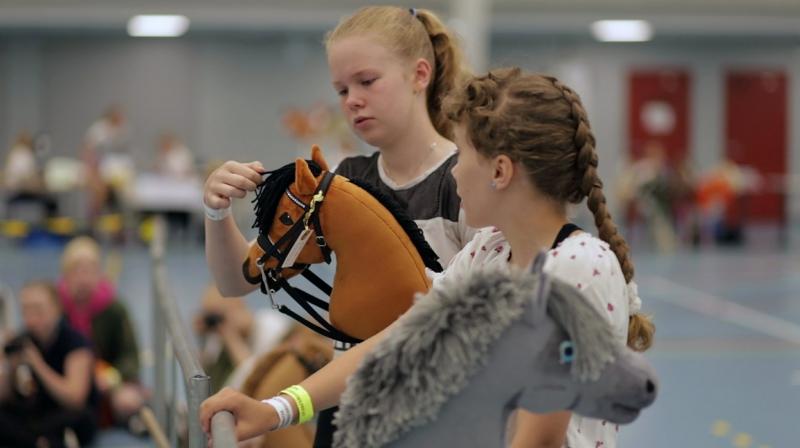 Helsinki: The 400 contestants at a sports arena in Finland show jumped, barrel raced and pranced in a dressage competition. They just didn’t do it with live horses.

What organisers called “the biggest hobby horse event in the world” took place Saturday in Finland’s western town of Seinajoki, which hosted the annual national championships for the sport that simulates the gymnastic elements of real-life horseback riding.

Teens and young girls, mostly 10-to-18-years-old galloped, jumped and pranced with their homemade stuffed horse heads on a wooden stick in the physically demanding competition as over 2,500 spectators watched, Elviira Sarakoski of the Finnish Hobby Horse Association told The Associated Press.

The Western horsemanship section included barrel racing modelled after North American rodeos. Competitor Aquata Kirveskari, 19, said hobby-horsing “is a sport for everybody, but the boys haven’t been participating so much yet. But there are more and more coming every year.”

Sarakoski said Finland has over 10,000 hobby-horse aficionados — by far the largest number in any country — and says the sport is gradually gaining momentum in some other European nations like Sweden, Germany, the Netherlands and Switzerland, all hotbeds for equestrian sports.

There’s a bit of a social media subculture among the hobbyists, who often spend dozens of hours creating their own wooden horses. Sarakoski said most cite the camaraderie, the “do-it-yourself” spirit and the lack of bossing adults, not competition success, as what hooked them on the sport.

“At real horse stables, you always have adults telling you what is right and how things should be done. It’s not that it is bad, particularly concerning safety, but still,” she said, adding that many — but not all — of the competitors have some experience with live horses.

Kirveskari said she didn’t mind journalists flocking to the arena “because they can show this hobby isn’t just childish playing around.” “This is a serious competition, and they can show it to people all around the world,” she said.

The highlight of Saturday’s event came as Marie Karkkainen of Finland scored the country’s new hobby-horse high jumping record, leaping over a bar set at 1.41 meters (4 feet, 7 inches) high. “I wasn’t expecting anything like this at all. I was expecting like 1 meter or something,” the elated 16-year-old said, gently patting her hobby horse.