Bringing Devdas, the mother of all unfulfilled love stories to the stage

Having been adapted on the big screen around 19 times in various languages, Saif Hyder Hasan now brings it to the proscenium. 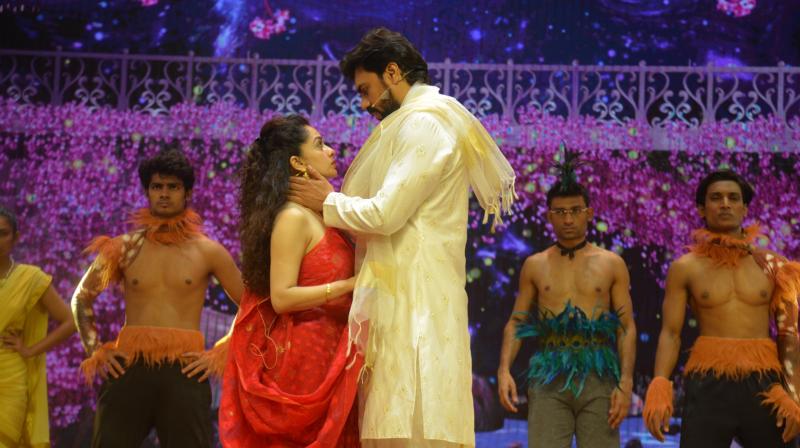 Devdas, a novella by Sarat Chandra Chattopadhyay, is probably one of the most famous love sagas in Indian Literature.

For everyone who has leafed through Sarat Chandra Chattopadhyay’s 1917 Bengali romance novel Devdas, they know that the author had created a complex labyrinth of human emotions that left not only the characters he wrote, struggling to grapple with matters of the heart, but has since then, left readers for over a century anguished, intrigued and hopelessly in love with his musings through the protagonist, Chandramukhi and Paro.

Devdas, a novella by Sarat Chandra Chattopadhyay, is probably one of the most famous love sagas in Indian Literature.

Having been adapted on the big screen around 19 times in various languages, Saif Hyder Hasan now brings it to the proscenium through his interpretation of Chattopadhyay’s work, a task that is both greatly exciting and unimaginably daunting.

Talking about the adaptation, Saif Hyder Hasan, director says, "Devdas is the mother of all love stories. It is the apex of unfulfilled yet eternal love. The story has sustained itself for over 100 years and been adapted for cinema across languages for the sheer poetry and drama inherent in the story. Now on stage for the first time in all its splendour it will move the audience by its spectacle and creativity.”

In conversation with this correspondent, Saif Hyder Hasan, Director, and Gaurav Chopra, who essays the protagonist, speak about their experiences directing and enacting Chattopadhyay’s work on stage.

Bringing Devdas to the stage, how daunting a task was it?

Saif Hyder Hasan: The challenges of any bringing alive any production is the same. If you are a story teller, you just got to make sure that you engage your audience with your story telling. It s a huge production with 12 songs, choreography, performance, the works, sets, etc. But as I said, every play, every story has its own challenges and it was fun dealing with them. It has been a roller-coaster ride.

Gaurav Chopra: It gets tough for an actor working on television and other mediums to be doing something of this scale that takes up so much time from your schedules.

The theatre is limited to people who watch it and you can only impress and win them if they come and watch your show. However, the pleasure of playing a role like this with a bunch of people who are equally passionate is unparalleled.

How different is the play from the original manuscript?

Saif Hyder Hasan: It is completely different from all the films. In fact, before writing the new script I didn’t go back to the films and read the story all over again. And I drew certain questions from there, for instance, what happened to Chandramukhi and Paro after Devdas passed away. That starting point is the biggest difference in the structure of what the play is all about. The entire point of view of the play is Chandramukhi. So once you get that structure in place, everything changes.

Who is your favourite Devdas? Which actor, according to you, has essayed the role the closest to what Sarat Chandra had envisioned?

Saif Hyder Hasan: I have seen all 3 versions. KL Segal’s version was kept akin to its time, so was Dilip Kumar’s who did a fabulous internalization as Devdas. Shahrukh Khan, I think he played it as a spoiled brat and interpreted it fabulously well. Dilip as an extremely internalized and anguished Devdas and Shahrukh with his very volatile interpretation, breathing with anger, and frustration, both did stellar jobs. KL Segal portrayed the character as according to his times, I am no one to judge them.

What was the most difficult part about enacting Devdas?

Gaurav Chopra: Devdas is a classic, and we are remaking a classic. We are not reinventing it, we are just recreating it. We are keeping the ethos of the classic alive. We are talking about a story that is set in 1917 and has its own complexities in terms of social structure, behaviour, restrictions on women, and social distinction between classes.

All of those complexities are an integral part of Devdas and hence every character has its own complexity pattern.

But Devdas, the protagonist himself is the most complex one.

Here is a man who lives by passion, is impractical at times and makes decisions impulsively, out of a flood of emotion, which he sometimes regrets later on, and the regret itself is filled with passion.

So, someone who is so passionate and so impractical, he is bound to be so complex. It’s also a complex character to play in today’s time, where you break up today and move on tomorrow. To play somebody, who would rather live with the loss of his love, rather than gain something new, someone who prefers to live in the memory rather than make new memories, it is a little difficult when you are playing that on stage.

The mistakes that I’ve made in my own life that make me feel like, maybe I would have done the same thing if I was living in those times. So yeah, that’s Devdas, unfortunately or fortunately the most complex character, and the most beautiful character of the story.

Why do you think people will be interested in so old a story as Devdas? What makes it relevant even now?

Which character, according to you has the most complexities and why?

Saif Hyder Hasan: In the book, I feel Chandramukhi is the most complex character. She is a multi-layered character and represents what you call woman empowerment. I mean 100 years ago this man wrote this. And I feel none of the film makers have been able to justify Chandramukhi so far.

Devdas is definitely complex. For me it represents Bengali resonance. I won’t give any spoiler alerts, he does a lot of things which are new, and you haven’t seen it in Devdas before. Paro’s character perhaps shows the most growth, going from a child woman, to a woman who has seen it all.

Chandramukhi, well in my own little way, I’ve tried to layer this character, the point of view of this play is from Chandramukhi. And you will see her do a lot of things that you haven’t seen Chandramukhi do before. My issue with the other Chandramukhi is that all of them were very weepy, which was not really the case with the original Chandramukhi.

Saif Hyder Hasan: Right now, I’m focusing all my energy on Devdas. There are a couple of ideas. It all depends on what I prioritise on, but let me open Devdas first. Then let’s see what we do after that.

Gaurav Chopra: Ever since I came out of Big Boss, I have been dabbling with the digital medium. It was not a conscious decision, it just so happened because television was offering me similar roles and the ditital media is more diverse.

As of now, all my focus is on Devdas and as soon as I wrap Devdas, I will start with Love Lust & Confusion Season 2. I was part of the season 1 but season 2 is more intense and is a very interesting love story again.