Tejaswi Vobilisetti gave up a lucrative career to become a yoga instructor and India’s cultural ambassador to Germany. 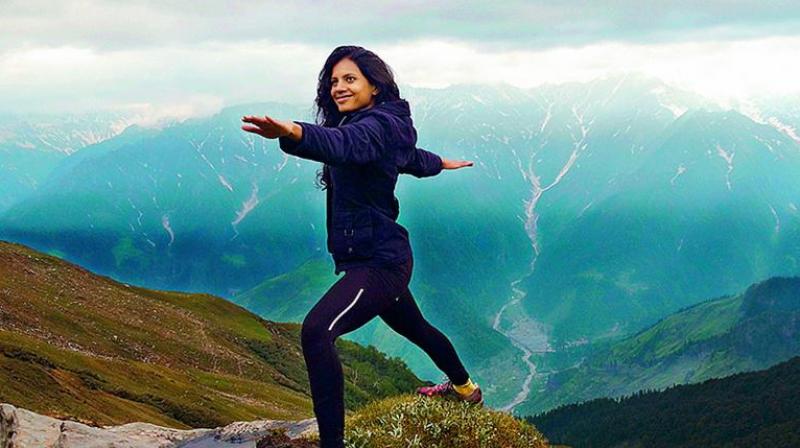 Telugu girl Tejaswi Vobilisetti, a software engineer in Bengaluru, quit her IT job to take up an alternate career in yoga.

“Even when I was working in Bengaluru, during my free time, I used to take yoga classes in government schools, NGOs, etc. Since my family was into ‘Art of Living’ and yoga, I was fascinated to know more,” shares Tejaswi, adding, “It has changed me a lot and I have realised that yoga isn’t just about asanas. The slokas and mantras (which my dad taught me) have an effect on the body and I am able to meditate for longer hours than before. I realise that if you have a guru, things are clearer and you know that someone is taking care of you. Having a guru like Sri Sri Ravi Shankar has given me great confidence.”

Explaining her transformation, Tejaswi says, “Earlier, I was an introvert and had stage fear. I was also low on confidence. But now, I am outspoken. My dad worried about what I would do in life, but now, he’s happy to see me multitask.”

It was when she saw people experiencing the power of yoga that Tejaswi decided to do a certification course to make a career out of it. “I went for a formal training with the ‘Art of Living’ and became a teacher there. Later, I went for a certification course under the Ministry of Ayush,” recalls Tejaswi, adding, “When I went trekking to Manali, I found several avenues where I could start my career like yoga hiking (meditating at a high altitude), yoga trekking, etc. It was then that I decided to quit my job.”

Although her parents were initially shocked with her decision to quit a lucrative IT job, she says that they were convinced after seeing the results.

Recently, the Government of India started deploying cultural teachers abroad to spread knowledge about our culture, yoga, Sanskrit etc. Tejaswi feels her present position as a cultural instructor — to spread the knowledge and awareness of yoga in Germany — is exciting. “It’s a great initiative by the government. This is the first time this position has been created, and it’s a great opportunity. I will visit schools, colleges and universities and inspire them to come to India and study. Yoga is my passion and many people don’t know that they can make a career in this field,” she says.

Tejaswi recently trained for 15 days in New Delhi on Patanjali yogasutras, Bhagwad Gita and Sanskrit amongst other things related to Indian culture.