Against a savannah backdrop, actor Lou Naiming, wearing colourful clothes and carrying a tray of fruit on her head. 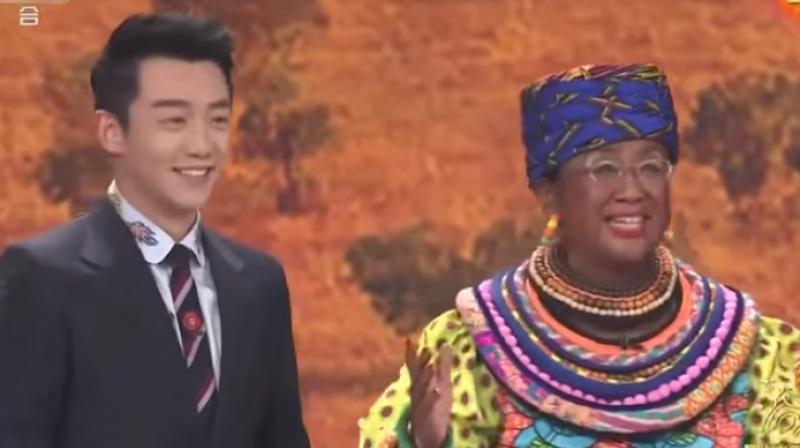 The skit also stirred unease in China, where hundreds of Internet users expressed their dismay on the Weibo microblogging platform. (Photo: Twitter/thebruhnisher)

China’s Lunar New Year television extravaganza, watched by hundreds of millions, was hit by online accusations of racism Friday over a sketch in which a Chinese actor appeared made up as an African woman, with large fake buttocks.

So this is how China celebrated #ChineseNewYear... In Blackfacehttps://t.co/ucwQXlzgZr

Against a savannah backdrop, actor Lou Naiming, wearing colourful clothes and carrying a tray of fruit on her head, was followed by an actor dressed as a monkey.

With another actor made up as her daughter and drawing in the Chinese presenter on stage, the sketch of comic misunderstandings ends with Lou declaring to applause: “I love China!” Apparently intended to promote Sino-African friendship and Beijing’s growing infrastructure investments on the continent, the skit on state television CCTV also featured a group of black dancers wearing grass skirts and feather headdresses alongside actors dressed up as zebras, giraffes and lions.

The act provoked strong reactions from foreign Twitter users, who criticised its “racist” prejudices and lambasted its use of the Western theatrical practice of “blackface” to stereotype black people, now widely regarded as offensive.

Twitterati reacted globally to the embarrassing and derogatory skit:

A CCTV Chinese New Year sketch sparks outrage with 800 million viewers as one of the actors performed with black face to show African -Chinese ties. The Chinese actress, along with her pet monkey was screaming, “I love China.”

If the you are chilled by the "Chinese New Year blackface" show, just understand that is the level of bigotry that is "open."

Just imagine the level of bigotry that is NOT internationally disclosed.

Hint: Google which side of the Rohingya genocide the Chinese government is on.

The Chinese govt banned Gigi over the 🍪
row meanwhile they allow millions to watch this https://t.co/eBARQVu9i8

Apparently CCTV thinks this is okay??? It appears to be a Chinese woman with "enhanced" body and blackface doing a caricature of an African woman. #ChineseNewYear #racism pic.twitter.com/JVh0zGOX3o

😂 there's a thread on Weibo posted by the Gala host (CCTV) interviewing the actors. Comment section went crazy, filled with angry viewers, so CCTV closed the comment section, like what they always do when things go wrong. https://t.co/5iz34V73Mw

It’s 2018 and people still don’t get it! Minorities can be racist too! https://t.co/iLLi0PaIse

Going from the high of #BlackPanther and it’s success to seeing blackface in a Chinese New Year sketch is a good metaphor for 2018.

Update: We regret to inform you that the Spring Gala did blackface https://t.co/IvDbguVI7o

This sketch from the Chinese New year Gala might be a tad racist it was supposed to promote Chinese-Africa relations but it probably back fired #blackface #ChinaDoesntUnderstandRacism pic.twitter.com/OSXnpPbuF1

But the skit also stirred unease in China, where hundreds of Internet users expressed their dismay on the Weibo microblogging platform.

“This sketch offends both Africans and Chinese spectators, it was not comical,” said one Weibo user.

Another said: “I do not see at all the expression of Sino-African friendship, but the racist attitude of an arrogant so-called great power.” “Completely inappropriate,” was another reaction.

Another comment, censored but recorded by the Free Weibo site, quipped that a “new Orientalism” was emerging where “the Chinese engineer replaces the Western missionary” in Africa.

Other Chinese internet commenters, on the other hand, defended CCTV: “I do not really see anything racist, China does not attach much importance to all this,” said one.

The offending performance was part of the comedy sketches for the traditional Lunar New Year’s Eve extravaganza broadcast by CCTV and watched by hundreds of millions of Chinese.