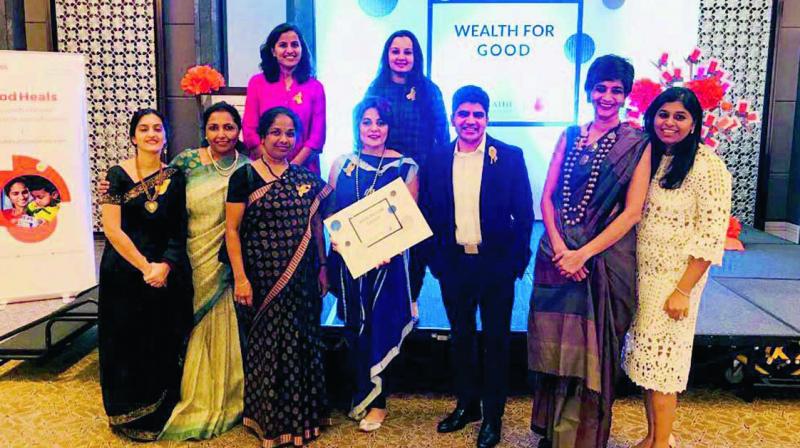 Members and volunteers of the Cuddles Foundation.

At 37, Suhani Mehta is spearheading an initiative (Bengaluru Chapter, Cuddles Foundation) that most of us are probably aware of, but haven’t delved deep into – offering nutrition for underprivileged children suffering from cancer. “But what makes a difference is not mere knowledge, but the awareness of the importance of saving these kids and understanding what they go through has embedded a deep sense of mission and purpose,” believes Suhani. Currently running an ongoing campaign online titled,  Feed a child, starve cancer’; she tells us more...

“We’ve been running a campaign online ‘Feed a child starve cancer’ to garner funds towards the cause. It costs Rs 3,000 for us to feed a child who has cancer and is malnourished. Childhood cancer is a growing epidemic and we hope with generous support we’ll be able to fight it,” begins Suhani, who leads the Bengaluru Chapter of the Cuddles Foundation. Sharing about how it all began, she enthuses, “Kidwai Memorial hospital needed support with nutrition for their under-privileged kids fighting cancer. They had heard about our work with TATA Memorial in Mumbai and Delhi through the doctors there. The chapter was started because of the sheer need for help and assistance required in Bengaluru. I had known Purnota, the Founder of Cuddles, for a long time and when she approached me to push it forward, I couldn’t say no. The mission was so overwhelming and compelling,” begins Suhani, adding, “The importance of saving these kids and understanding what they go through has imbedded a deep sense of mission and purpose and I can say confidently that the whole team feels the same.  We now work with three hospitals in Bengaluru with three nutritionists and one social worker and many volunteers who are totally committed to the cause of saving kids fighting cancer through nutrition.”

It has been just two and a half years since they set up an office in Bengaluru, but the accolades have been rewarding enough. “We received the National Award for child welfare in 2015-2016 recognised by the Rashtrapati Bhavan by the President of India, Pranab Mukherjee. It felt very special to be recognised for the work we so passionately do. I am convinced that everything we’ve been able to achieve is solely because of sheer team work. Some friends like Meera Biswas have come forward and offered to volunteer and were genuinely drawn towards the cause. That’s what helped.”

While the accolades are certainly motivating, the intent to spread awareness and offer adequate support is what forms the crux of all initiatives. She elucidates, “Nutritional intervention is a must and most parents don’t have the knowledge on what to feed their kids, importance of right food nor can they afford nutritional supplements. Our ration, hot meals and food supplements give a big boost to the child’s well-being, thus making them strong enough to tolerate treatment.”

Besides social work, it’s family time that keeps her on her toes. “I love travelling. But nothing compares to some quality family time with my children. Spending time with them is what I cherish the most during my free time.”

On what’s next, Suhani signs off by stating, “The need is huge. We are working on raising funds so that we can expand to more hospitals around Bengaluru and serve more kids.”