More than a pretty face

Amal Clooney’s strong speech at the UN was reduced to reports of her baby bump and heels, understandably causing an uproar among women. 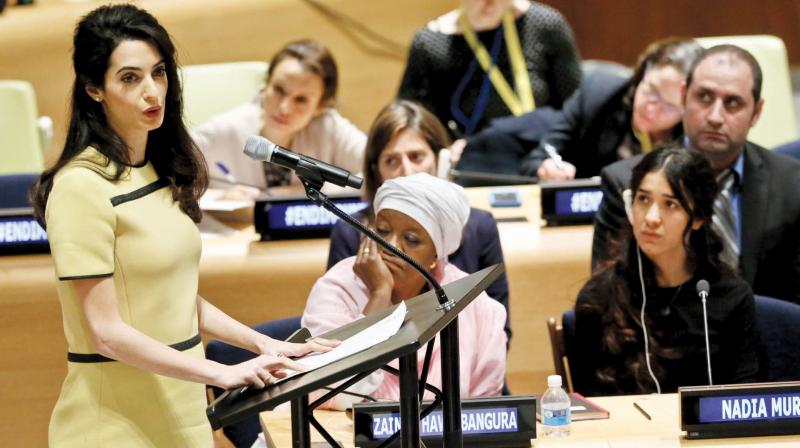 Earlier this week, Amal Clooney, an international human rights lawyer, went to the United Nations (UN) to deliver a speech on genocide by members of the Islamic State in Syria and urged the world to take action against the brutality happening there. Amal, who’s expecting twins with her husband, actor George Clooney, is also known for fighting for refugees, rape victims and women who have been trafficked for sex.

But the conversation about the speech revolved more around appearance — more specifically,  her baby bump and footwear. While some appreciated her look, others slammed her for wearing heels while pregnant.

Aruna Bahuguna, IPS officer, and the first woman director of National Police Academy, says, “It’s very unfortunate that they are neglecting the important issue that Amal spoke about. I cannot believe that the attention from her speech on an issue such as genocide is being diverted to things such as her baby bump and heels. What she wears is nobody’s business. It’s high time that the society takes women more seriously, and doesn’t judge them only for their physical appearance.”

Similarly, most female athletes are judged for their appearances instead of their achievements. Says badminton star Jwala Gutta, “Women are always judged by how they look and dress. Her opinion is not taken seriously at all. Amal’s incident is very disappointing. Why discuss her appearance, when there’s so much more that’s important about her?”

Politician Renuka Chowdhury says, “Women face a lot of challenges and are expected to be better than men to be acknowledged as achievers. Amal Clooney has achieved a lot more than most average men, and she needs to be respected for it. The fact that she was reduced to heels and the dress she was wearing, shows how biased and silly the society is.”

Ira Mukhoty, the author of Heroines: Powerful Indian Women of Myth and History, has explored through her research, the portrayal of women, right from the times of war. She explains how the patriarchal mindset is ingrained in our society that there are barely any women rulers or leaders written about in history books. In Amal’s case, Ira adds, “It is very unfortunate to see how even in the so-called ‘developed’ western societies, a woman is reduced to her appearance alone. The first instinct is to judge a woman based on her looks as many cannot digest to see a strong woman in a powerful position. They find it easier to contain them within these maternal roles.”

Ira adds that the only way that women can break out of these boxes they’re put in, is by continuing to do their jobs and not let the judgments bother them.

Radhika Vaz, Stand-up comic
Honestly, what happened with Amal is not something that the society ‘often’ does, it’s something that it ‘always’ does. I think we also have to be sensible about it as well. In the sense that if a fashion magazine is doing this (look at what she’s wearing, I get it). I’m not going to war on this. On the other hand, if you have a prominent law journal going on and on  about her baby bump and clothes she’s wearing, I’d have a really big problem with that. We have to separate entertainment media from everything else. Every space has a purpose of its own.