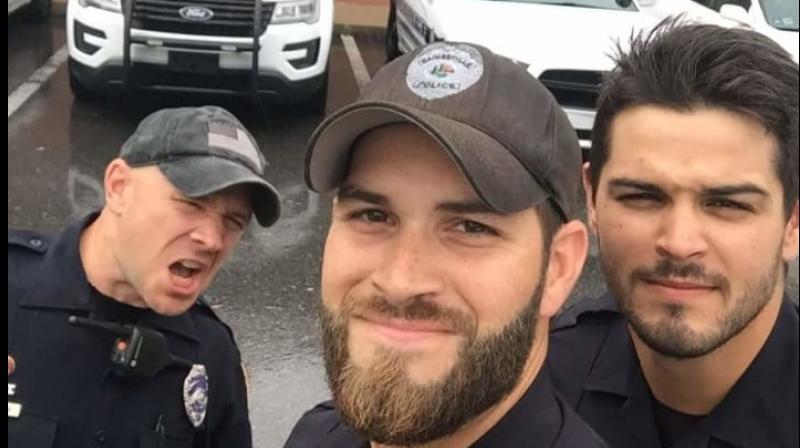 When three male officers from Gainesville Police Department uploaded their picture to Facebook on Sunday, they didn't expect it to go viral and comments praising their looks wouldn't stop pouring in.

Gainesville PD posted the picture with the caption: "Officers Nordman, Hamill and Rengering...part of the night crew getting ready to do some work. #Irma."

While Sydney Joycelyn commented: "I'm having breathing problems at the moment. I'm located in another state but I'll manage until Mr. Officer man rescues me."

Luci Kaye wrote: "I can't believe how many women are objectifying these poor, fine, young, strong, handsome, brave, sexy, delicious, virile, ovulation-inducing, mouth-watering, beefy..... I can't remember where I was going with this..."

While Heather Groom commented: "This pic is exactly why your grandmother always told you to wear clean underwear in case you're in an accident."

And Tatiana Giraldo wrote: "I feel safer just looking at this picture."

It said in an update a few days after the initial post:
"1. We are dying with the comments. You've actually made our chief blush with some of them.
2. MRS. Nordman and MRS. Hamill have also enjoyed knowing how millions of women are going crazy over their husbands.
3. We can confirm that Officer Rengering (far right with the amazing hair) IS SINGLE.
4. On another note, Officer Rengering is being placed into Cougar Prey Protective Care, similar to the witness protection program for his safety.
5. Please do not call 9-1-1 and request this group respond to your "incident"
6. There WILL be a calendar."

The police department said funds from the calendar would go towards relief efforts for those affected by the hurricane.

"Thank you all for the hilarious comments...they have brightened our time up here. As for the calendar, we are going to try and do something fairly quickly and funds raised will go to Hurricane Irma recovery here in Florida," it said.

However, on Thursday, Officer Hamill was under investigation after someone lodged a complaint against him. A Buzzfeed report stated that police would not elaborate on what the complaint was about, but the Gainesville Sun reported that Hamill had made anti-Semitic comments on Facebook.