More than 2,000 gold coins from the wreck, most of them Spanish and Portuguese, are in a central bank vault in Windhoek, the capital 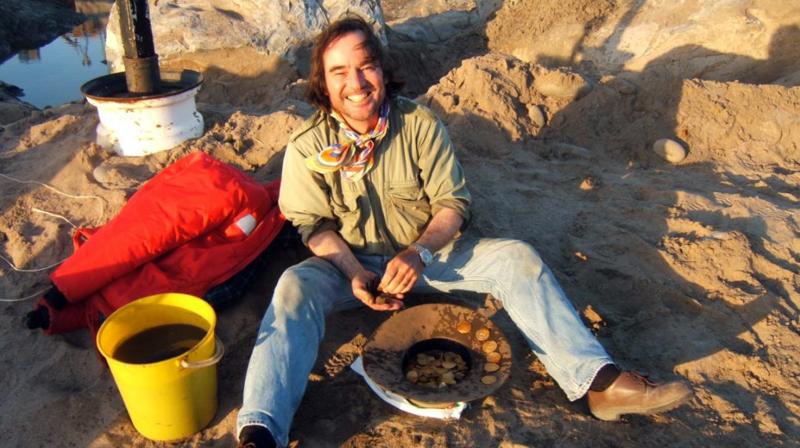 Archaeologist Dieter Noli sits in the sand with gold coins from the wreck of a 16th century Portuguese ship that was discovered in a diamond-mining area on Namibia's Atlantic coast, in Oranjemund. (Photo: AP)

Diamond prospectors in Namibia nearly a decade ago stumbled upon remnants of a shipwrecked Portuguese vessel whose trading journey to India was cut violently short by a storm in 1533. Today the artifacts from the doomed ship, described by archaeologists as one of that era's most important finds, remain a hidden treasure.

Relics stored in a dimly lit warehouse at a diamond mine on Namibia's Atlantic coast include bronze cannons, copper ingots, eroded musket stocks, cracked ivory tusks and rusted sword sheaths, but they are seen by only a small number of visitors who navigate sealed doors and other stringent security features at the mine operated by Namdeb, a joint venture between Namibia and the De Beers company.

More than 2,000 gold coins from the wreck, most of them Spanish and Portuguese, are in a central bank vault in Windhoek, the capital.

The remains of the ship owned by Portuguese King Joao III, identified by archaeologists as the Bom Jesus, are in limbo in this southern African country where many vessels foundered over the centuries on its treacherous coastline.

While Namibia says it needs resources to preserve, restore and display the trove, some archaeologists believe political will is lacking and worry that the chance for valuable research and a tourism bonanza is closing as decay takes its toll.

"It would have been a wonderful bonus for the Namibian government," said Dieter Noli, who worked at the Bom Jesus excavation site, which had been safe from plunderers in a diamond-mining area called the Sperrgebiet, or "prohibited area" in German.

The significance of the ship "lies in the fact that it is the only one from that time that is untouched, unlooted," Noli said. "Therefore, it offers a more complete window into the past."

Plans to open a Bom Jesus museum in the mining town of Oranjemund, near the shipwreck site, are languishing.

Namibia needs a sponsor to "kick-start" the museum project and Oranjemund has set aside land for it, said Esther Moombolah-Goagoses, head of Namibia's national museum, which oversees the shipwreck.

Mowa Eliot, a Namibian maritime archaeologist, said the discovery of the Bom Jesus was a "turning point" in Namibia's appreciation for maritime heritage and that the government is committed to conserving the remains.

Portugal decided not to reclaim possession of the artifacts "as the country whose flag it was flying under," the Portuguese culture ministry said in written responses to questions from The Associated Press.

It said Portuguese teams assisted Namibian and Zimbabwean archaeologists working on the wreck in 2008 and 2009, and that it is in touch with Namibian authorities about staging a traveling exhibition of the finds in Windhoek and Portugal.

Portugal plans to hold a conservation and restoration course in Oranjemund and "is waiting to hear from Namibia about its training needs," the ministry said.

Since independence from white minority rule in 1990, Namibia has sought to reinforce national and indigenous culture, highlighting the long history of the San people as well as the brutal legacy of German colonizers.

At the same time, it receives extensive funding from Germany and vigorously promotes itself as a destination for international tourists.

While the fate of the crew of the Bom Jesus is unknown, the ship's relics include pewter plates, cutlery handles, a brass medical syringe and goods that were to be traded for spices in India - ingots stamped with the trident symbol of a German trading house, and elephant ivory believed to have been transported from West Africa to Lisbon, the Portuguese capital.

Wood planks from the ship's structure and weapon parts are kept in tanks of water, a conservation process that removes corrosion-causing salt.

Noli, the archaeologist, said the ingots are "quietly going green and are literally flaking away" while other materials such as wood and leather are slowly disintegrating. Three astrolabes, devices used for navigation, should be flown to Portugal for restoration and research, Noli said.

In a 2016 report, the Portuguese television channel RTP visited the Windhoek bank vault in hopes of seeing the stash of gold coins. In one awkward scene, Namibian officials standing in front of a padlocked safe box said to contain the gold say they can't open it because there is a problem with documents.

Alexandre Monteiro, an expert at the Universidade Nova de Lisboa in Portugal, said Namibia should ask UNESCO, the United Nations cultural body, to send a technical team to evaluate the artifacts.

"With every passing day, the opportunities we have to stop this process of degradation are diminishing," he said in the RTP report. "The Bom Jesus will indeed disappear in a few years' time if nothing gets done."