Heart-warming hug for Meghan and Harry in Aussie outback

Harry and Meghan are following in the footsteps of Queen Elizabeth who visited Dubbo in 1954 and 1992. 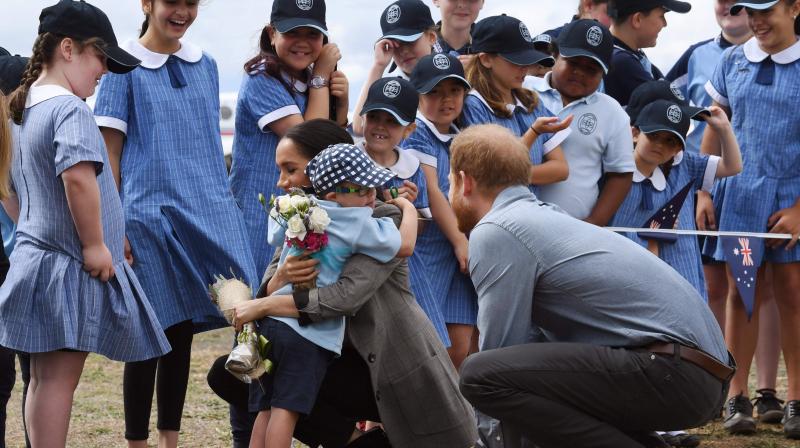 Britain's Prince Harry (R) looks on as his wife Meghan, the Duchess of Sussex is hugged by student Luke Vincent of Buninyong Public School following the couple's arrival at Dubbo Regional Airport in Dubbo on October 17, 2018. (Photo: AFP)

DUBBO: A heart-melting hug from a five-year-old Australian schoolboy greeted Harry and his expectant wife Meghan in the outback Australian town of Dubbo Wednesday, before the royal couple sat down with farmers in one of the country's hardest-hit drought regions.

Throngs of locals brandishing cardboard cut-outs of the royals gathered in the town, while others wore royal fancy dress and a local bar even specially brewed a beer dubbed "Dubbo Royale".

The prince and his US-born wife were met on Dubbo's airport tarmac by gleeful school children waving Australian flags, before unveiling a new aircraft for the country's Royal Flying Doctor Service at the local airport.

But the pair also stopped for a cuddle with five-year-old Luke Vincent, who was wearing his Buninyong Public School uniform and a blue-and-white cap as he nuzzled the duchess and affectionately rubbed the duke's thinning ginger head and stroked his beard.

The royal couple are in Dubbo -- a town six hours' drive from Sydney -- to enjoy a family picnic, tour a school that works with young indigenous Australians and to meet with drought-stricken farmers. Eastern Australia has been suffering through record-breaking dry periods, with some regions in and around Dubbo experiencing several years of drought.

The Duke and Duchess swatted away flies as they met with local farmers on an outback property, where they were told of the impact of the drought and helped out with buckets of feed for livestock.  They sat down for afternoon tea with a farming family, with the duchess bringing along her own homemade banana bread she had reportedly baked the night before.

Harry and Meghan are following in the footsteps of Queen Elizabeth who visited Dubbo in 1954 and 1992. In the town, shops and pubs were decorated with banners, bunting and royal portraits.

A Dubbo bar went further to welcome the couple -- who announced this week they were expecting a baby -- by making a batch of "Dubbo Royale" beer. The brew combines an English-style lager with US West Coast hops, in tribute to the happy couple. "It's like a marriage in a beer can," bar licensee Ryan Mackintosh told local publication the Daily Liberal.

The royals began a 16-day Pacific tour on Monday, landing in Sydney and almost immediately announcing the duchess' pregnancy. They will visit Melbourne on Thursday before returning to Sydney. On Friday the prince will scale the Sydney Harbour Bridge and hoist a flag to open the Invictus Games, a sports championship for wounded military personnel.

On Monday the pair will go to Queensland's Fraser Island, the world's largest sand island, before jetting off to Fiji, Tonga and New Zealand.