The many hues of Navratri

In the melting pot of cultures that is India, the Navratri traditions of different communities make celebrations brighter. 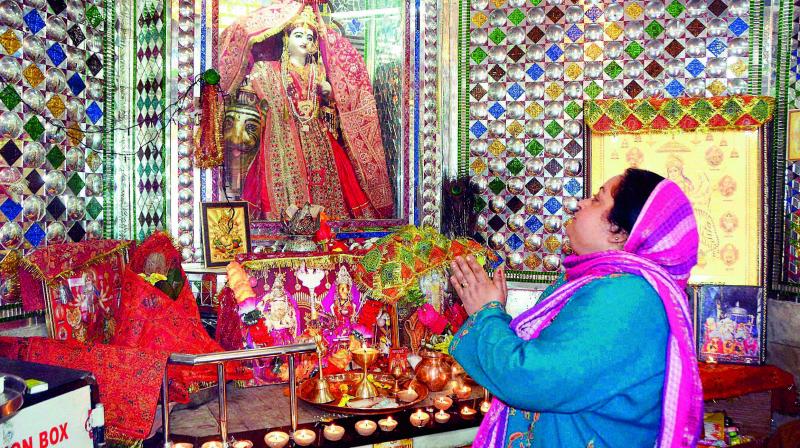 In the northern states of the country, Navratri is not just about worshipping the various forms of Ma Durga.

This year, Navratri celebrations in the city have come alive through an amalgamation of customs from across the country — each having its own special significance.

In the northern states of the country, Navratri is not just about worshipping the various forms of Ma Durga.

Ranjana Devi, a housewife who hails from Uttar Pradesh says, “We do worship Ma Durga, like the rest of the country. But for the people of Awadh, Ramayan-path (reading the Ramayana) is also of great importance. People come together in the evening, read the epic, watch ramleelas, and even perform havans during these nine days.”

According to Neeti Tiwari, a school teacher from UP, ramleelas are the most fun part of the nine-day festivities. “We all know the story of Ramayana, but to revisit it is a new experience each time. What makes it more interesting is that unlike other plays, most ramleelas are musicals. You get to see Lord Ram, Sita and Ravana singing instead of delivering dialogues.” she says.

For celebrity chef Puneet Mehta, who hails from Punjab, the highlights of the season are the jagratas — occasions when people stay up all night to pray to the goddess. “In Punjab, many people fast for the first seven days of Navratri to honour the incarnations of Ma Shakti. Every night, jagrans take place and devotees gather to sing religious songs. The fasts are broken on ashtami or navami by inviting nine young girls from the neighbourhood and honouring them with food, money and gifts,” he says.

He adds, “Punjabis also do the sundar kand-path during these nine days. The sundar kand is that part of Ramayana that talks about how Hanuman went to Lanka to look for Sita and burned down the entire city. Many people come together with dhols and manjeeras, recite the chapter and even sings bhajans in the evenings.”

Navratri is also a festival of music, dance and community — for Marwaris and Gujaratis in particular. Apart from indulging in garba and dandiya celebrations every evening, they also fast and worship idols of the goddess. Madhu Jain from the Deepshikha Mahila Club says, “No puja is complete unless a diya is placed in front of the deity. But the smoke that emanates from the diya can be injurious to health. So this year, I have broken away from tradition and opted for an eco-friendly approach. I have made diyas out of orange shells and cinnamon sticks. The fragrance that they release lends a
positive vibe to my home.”

In conclusion, she adds, “It’s all about personalising these nine days and making the most of them — be it in the form of fasting or worshipping.”