Stop spread of TB from infected elephants to humans in Amber fort: PETA India to govt

Group says Modi's TB-Free India by 2025 can't be achieved without dealing with TB-infected elephants near Jaipur. 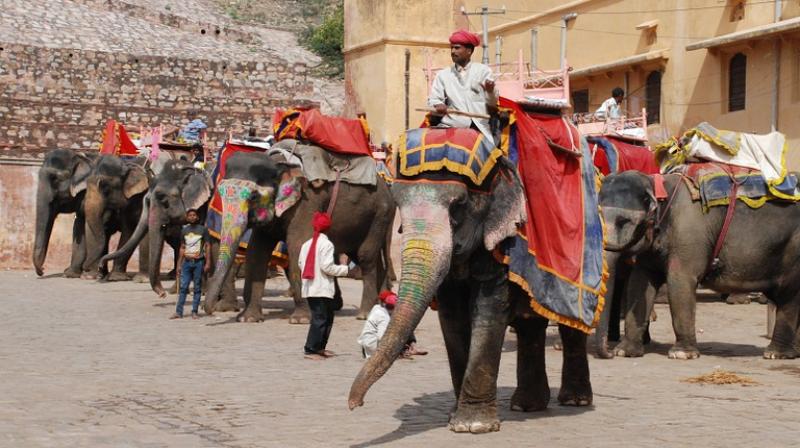 It's also reported that approximately nine per cent of all TB transmission is from non-human animals to humans – and the percentage is even higher among children. (Photo: Pixabay)

New Delhi: After learning of an outbreak of tuberculosis (TB) – which is highly contagious and transmissible from elephants to humans – among numerous elephants forced to give rides at Amber Fort, People for the Ethical Treatment of Animals (PETA) India fired off a letter calling on India's Minister of Health and Family Welfare, Jagat Prakash Nadda, and the officials of the Central Tuberculosis Division to quarantine the infected elephants, provide them with urgent veterinary care, and screen all untested elephants forced to interact with tourists for TB immediately.

The letter follows the release of an Animal Welfare Board of India (AWBI) report revealing that at least 10 of the 91 captive elephants used for rides and other tourist interactions in Jaipur are infected with TB.

The AWBI evaluation team included senior veterinarians of the Rajasthan Forest and Animal Husbandry departments and other veterinary and wildlife experts.

TB can be transmitted to tourists, animal handlers, and the general public from infected elephants.

The post-mortem reports for four elephants who died within a period of five months in 2017 indicate that most of the animals had been suffering from respiratory diseases – possibly including TB – and had heavy internal loads of parasites.

The AWBI report also states that elephants in Jaipur are particularly at risk of contracting TB because of routine transportation within the city and interactions with tourists that may expose them to infected humans or other elephants – as well as because of stress factors, including painful restraining methods, extreme confinement, unclean water, an inconsistent food supply, and poor nutrition.

"We hail the vision of the Honourable Prime Minister to aim to eliminate TB in India by 2025 – but it can't be done by ignoring the captive elephants who suffer from TB and can potentially infect humans," says PETA India Associate Director of Policy Nikunj Sharma.

"PETA India is calling on the Ministry of Health and Family Welfare to take swift action to protect both travellers and the sick, suffering elephants that are being denied much-needed veterinary care, putting everyone at risk."

PETA India notes that according to recent scientific studies, there's a high prevalence of TB infection in captive elephants, buffaloes, and cows in this country.

It's also reported that approximately nine per cent of all TB transmission is from non-human animals to humans – and the percentage is even higher among children.

The Rajasthan government isn't currently providing elephants that have tested positive for TB with any treatment or care, and it's failing to screen other elephants for the disease, putting tourists and anyone else who comes in contact with these elephants at tremendous risk of contracting the disease.