After the public meet-and-greet, the couple will spend some time with the Victorian Governor Linda Dessau. 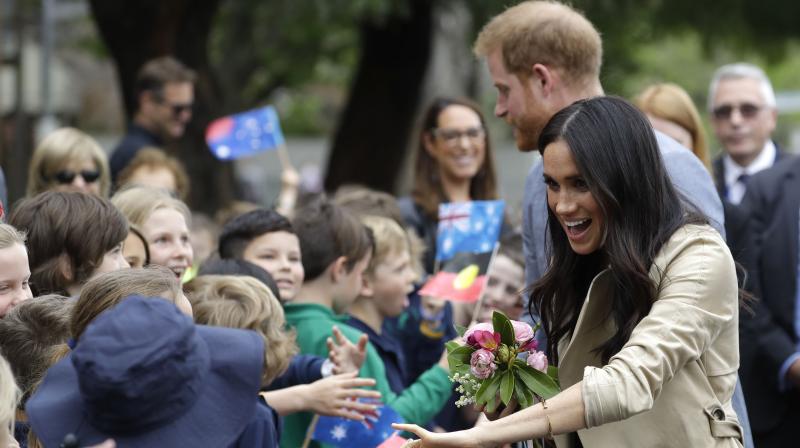 MELBOURNE: Thousands of royal fans in Melbourne waited in the rain on Thursday to get a glimpse of Prince Harry and his pregnant wife Meghan, with some overwhelmed by the experience.

Clutching flowers and waving flags, the screaming crowds turned out to welcome the pair, who were delayed in traffic after flying in from Sydney on the third day of their tour Down Under.

"I love everything they stand for. As a human being you have so much to look up to with them," one young fan who had been waiting since before dawn told national broadcaster ABC.

A teenage girl cried tears of joy after being greeted by the prince, while Meghan was inundated by gifts and flower bouquets.

The Duchess was wearing a tan trench-coat, believed to be by Paris-based Australian designer Martin Grant, and holding a Gucci Sylvie clutch.

After the public meet-and-greet, the couple will spend some time with the Victorian Governor Linda Dessau in an official reception at Government House, before heading to a restaurant that mentors indigenous chefs.

They will then follow in the footsteps of Harry's grandmother Queen Elizabeth during her 2011 visit by taking a tram ride in Melbourne.

The couple are due to return to Sydney later this week for the opening of the global sports championship the Invictus Games, which was set up by Harry for wounded military personnel after his decade of service in the army.