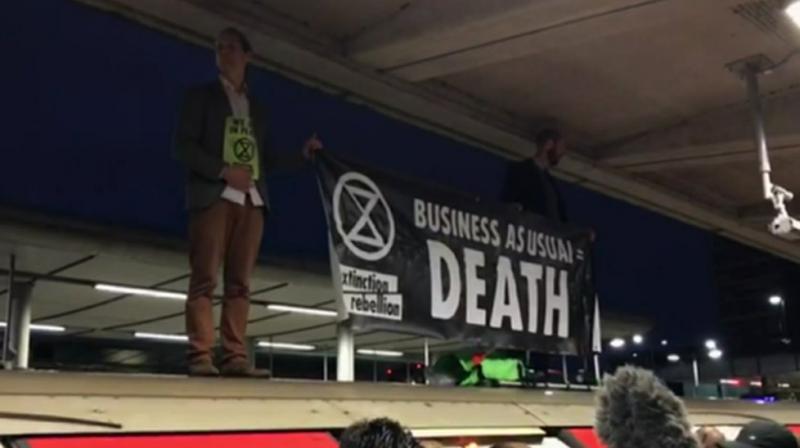 London: Angry commuters scuffled with climate activists who climbed onto the roofs of trains early Thursday, snarling services in the busy morning rush hours in the British capital. Londoners have largely tolerated a series of peaceful protests in recent days by the Extinction Rebellion group, but interfering with workers’ morning commute appeared to be a step too far for some.

Television images showed at least one man reaching up and grabbing the leg of a protester on top of a Tube train, dragging him onto the platform where he was quickly surrounded as he lay on the ground. British Transport Police say they were called to three stations in east London early Thursday after protesters climbed onto the roofs of trains or glued themselves to the carriages. Robin Boardman, a spokesman for the protesters, said that if such action is necessary to make the government take notice of their climate change demands, “then this is what we must do.”

“None of us want to inconvenience ordinary people,” he said. “That’s why we’re doing this in the morning when it will impact business as usual, and not in the evening, when people want to get home to be with their loved ones.” Police arrested a total of eight people and urged protesters not to target London’s underground rail network.

London Mayor Sadiq Khan condemned the protesters. “This illegal action is extremely dangerous, counterproductive and is causing unacceptable disruption to Londoners who use public transport to get to work,” he said.

More than 1,400 people have been arrested since the group began blocking roads, bridges and airports in London over a week ago to demand faster action on climate change. Most have been released without being charged.