Always a tomboy even before he even knew the word transgender. 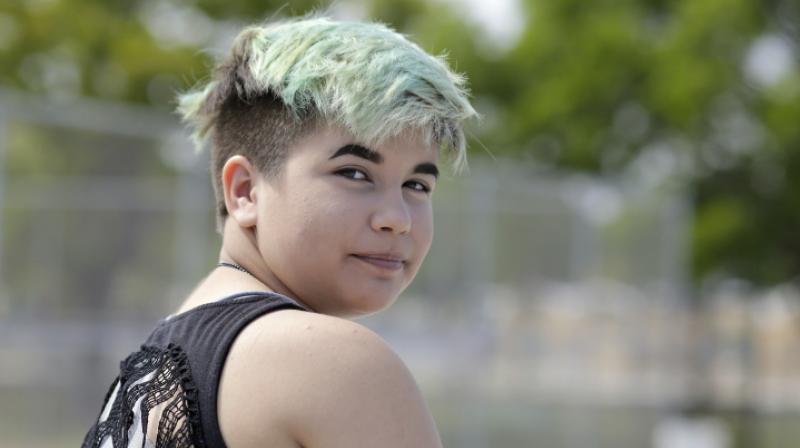 Always a tomboy even before he even knew the word transgender. (Photo: AP)

It was May of seventh grade, and 14-year-old Theo Ramos was in a new school. Perhaps because it was an arts magnet program, or because it was a diverse place, kids and adults seemed to embrace the transgender boy much more than those at his old school did. There were fewer nasty comments, less bullying.

Born a girl, he felt more like a boy. He wanted to be called Theo instead of the name he was given at birth — he wrote a detailed letter to teachers, explaining which pronouns he preferred and citing school policy on LGBTQ inclusion.

Always a tomboy even before he even knew the word transgender, he dressed in slouchy pants and black hoodies. He liked to hang out with skater guys in his neighborhood.

Theo knew he sometimes “presented like a girl” — like when he would Snapchat crowns of flowers on photos of his kitten, or how he colored his hair every shade of the rainbow. And he spent hours watching makeup artists on YouTube because, but, he said with a shrug, “you can be a boy and like makeup.”

In those days, he longed to take testosterone to fully embrace his gender. He begged his mom. He contemplated “top surgery,” or gender reassignment surgery.

Ever since Lori Ramos learned of Theo’s gender dysphoria, she’d been in favor of her child identifying with whatever gender made him most comfortable. But taking potentially irreversible hormones was another matter entirely — she said she wanted to postpone that as long as possible.

Experts agree that any transitioning teen’s journey is difficult and fraught with indecision, anxiety and worry — by the teens as well as their parents. TV shows, books and articles often portray people who are extremely certain they want to be a different gender. Reality is different: a continuum or a range, doctors say.

A trans teen might feel like a boy one month, and genderfluid — not having one fixed gender identity –the next. That’s one reason therapy is recommended, so the teen, and the family, can spend time reflecting.

Lori had been a hesitant mother from the start, but that had nothing to do with her support of Theo’s gender. She said she never wanted Theo to undergo permanent changes unless he’s absolutely sure he wants to live forever with male characteristics such as body hair and a deeper voice.

“What are the long-term health effects of T-therapy?” she often wondered.

And there were insurance issues. Testosterone could be expensive, and the family’s insurance might not pay for it. By the end of Theo’s seventh-grade year, Lori had stopped working to devote time to Theo and his medical and emotional needs. Her husband — Theo’s father — supported the family on his job with Miami-Dade County’s transportation department.

Having a child with a history of self-harm, who was diagnosed with depression and gender dysphoria, wasn’t easy. Plus, Theo had thyroid problems, other medical issues. Doctor visits and counseling became the norm, with Theo missing school. But there was good news, too: Theo had stopped cutting himself and throwing up. He attended a Rainbow Group for LGBTQ teens — it helped his mood.

Research shows that transgender people often suffer from mental health conditions; it’s unclear whether those stem from external factors such as discrimination and bullying, or internal factors such as gender dysphoria. Studies have shown that depression and a risk of suicidal thoughts increase with age.

Lori became vigilant, watching her son for signs of suicide or more cutting.

Over the summer of 2016, after seventh grade, everything seemed to be OK. Theo played video games, read, texted with friends and painted in his room. Regular teenage stuff.

He also acknowledged his sexuality, or tried to, and grasped that his gender was separate from his sexuality. First, he landed on bisexual as a preference: “If I find you aesthetically pleasing, I probably want to get in on that aesthetic,” he joked.

But to Lori, it didn’t matter — she wasn’t letting him go on dates anyway.

“I date,” Theo insisted, rolling his eyes at his mother and shaking his turquoise pixie haircut.

How others treated Theo weighed on Lori. She worried: How will he be perceived when he has serious relationships? “My concerns are more global,” she said. “The bullying. The taunting, the cruelty.”

Her concerns also centered on school.

In August 2016, Theo began eighth grade, already older than many of his peers — he’d been held back a grade — and he turned 15 two months later.

Soon after, he walked up to his mom as she read in their living room.

Lori raised an eyebrow; this wasn’t news to her. “You think?”

Maybe he’d like to wait until he’s an adult to take testosterone, Theo told his mom.

A year later, as Theo and Lori remembered this story, the day he told his mom he’d discovered even more about his gender identity, the pair were lovingly sarcastic with each other.

“She knows things in a way that moms know everything. She’s omnipotent,” Theo said with a sly grin. “She knows me as well as I know me.”

But sometimes, it seemed to Lori that maybe she didn’t know her own child. Many of Theo’s emotions were beyond her reach, making the years and days difficult and confusing for the family.

Living with a transgender child “is anything but a straight line,” she said.

“You go forward, you go back, you go left, right, you go around in circles,” she said. “It’s a journey of self-discovery. How Theo feels today is different than how he felt a year ago. Or two years ago. Or three. All you can do is support and love your child. That’s all you can do.”