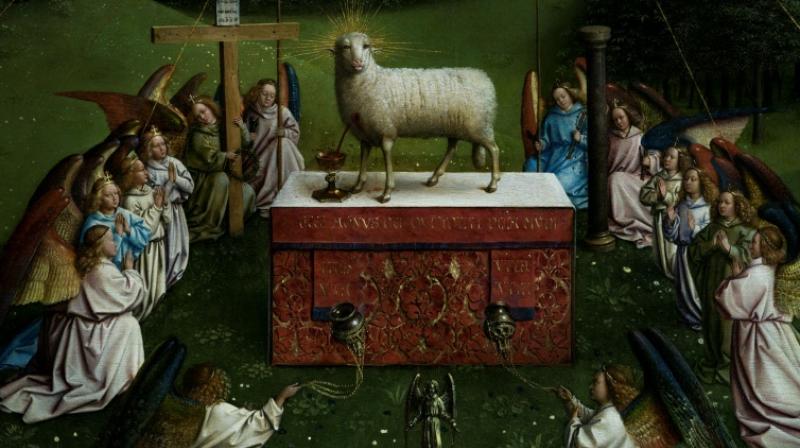 The Lamb of God is revealed in its mystic splendour -- and with the correct number of ears. (Photo: AFP)

The grass is greener, the sky is cleaner and dozens of tiny details have been exposed to delight art historians and inspire the devotion of the faithful. The central tableau of the 15th century Ghent Altarpiece -- a panel known as the Adoration of the Mystic Lamb -- has emerged refreshed from a three-year refurbishment.

It has been an object of veneration for the Catholic faithful of Flanders since 1432, and is a landmark of world art history visited by tens of thousands every year. Installed in St Bavo's Cathedral in the Belgian port city of Ghent, over the centuries it has survived outbreaks of iconoclasm and international intrigue.

During World War II it was initially sent to France for safekeeping, only to be seized on the orders of Adolf Hitler and stored for safety in a German salt mine.  Time took its toll -- salt, soot, sweat, varnish and dust all added to the patina. But now the lower half of the altarpiece including the central panel has been renewed.

"The landscape of the Mystic Lamb has opened up! Joyous, sunny!" declared restoration leader Helene Dubois as her team's painstaking work was revealed to journalists. "We have rediscovered its virtuosity and finesse," she exclaimed.

Historians believe the painted panels, depicting biblical figures and a congregation worshipping the lamb of God, was produced by brothers Hubert and Jan Van Eyck.

As such it is one of the finest examples of medieval art's transition from idealised depictions of figures towards naturalism.

For the restoration, it was transferred from the cathedral to Ghent's MSK museum and placed behind a protective window, so visitors could watch the work take place.

The outer panels were restored between 2012 and 2016, and the upper register that sits above the tableau of the lamb will receive attention in 2021.

Restorers used microscopes to guide their scalpels as they gently scraped away the grime that had built up over the centuries across the 20 panel piece that is 4.4 metres (14 feet, five inches) high.

The paintings were retouched in the 16th century and this layer has to be removed by hand, for fear that any solvents would damage the Van Eyck original beneath.

The result is a new look at the painstaking detail of the brothers' 12 years of work: pilgrims are shown with swollen feet, water drops fall from the fountain of life, sunlight glints of a knight's armour.

And at the heart of the main tableau, the Lamb of God is revealed in its mystic splendour -- and with the correct number of ears.

The mid-life touch up had moved the sheep's ears, and a partial 1950 refurbishment had uncovered the originals, meaning that for a while it was sporting four.

Da Vinci of the North

"Removing the repainting has totally modified its physiognomy. He had a sheep's head, with his eyes on the side. Now we see his eyes looking straight ahead of him," said restorer Marie Postec.

"Today, he has a physical presence and a gaze that challenges the devotee, the spectator. He has rediscovered the power of an arresting gaze," she said, dubbing the Van Eycks the "Da Vincis of the north".

The panels will be returned to the cathedral at the end of next month, and will be displayed in a large glass-walled case. The date of the transfer has not been revealed for security reasons -- perhaps reasonable ones.

In 1934 two of the painted panels, known as the "Just Judges" and "St John the Baptist", were stolen by a sacristan and the judges have never been found. At the outbreak of World War II the church planned to send the altarpiece to the Vatican for safe keeping, but it ended up in Pau in southern France, as several countries staked their claim to it.

Germany's Nazi regime seized the work and eventually hid it in a salt mine to protect it from air raids. The hunt to retrieve it was depicted in the 2014 film "The Monuments Men". The restoration of the upper register -- large panels depicting Christ the King and the Virgin Mary -- will wait until 2021.

"This third phase will be the hardest," Dubois warned. "There is a lot of overpainting and the embossed tin brocades are very damaged."