The name was edited after Palaniswami took oath as Tamil Nadu CM. 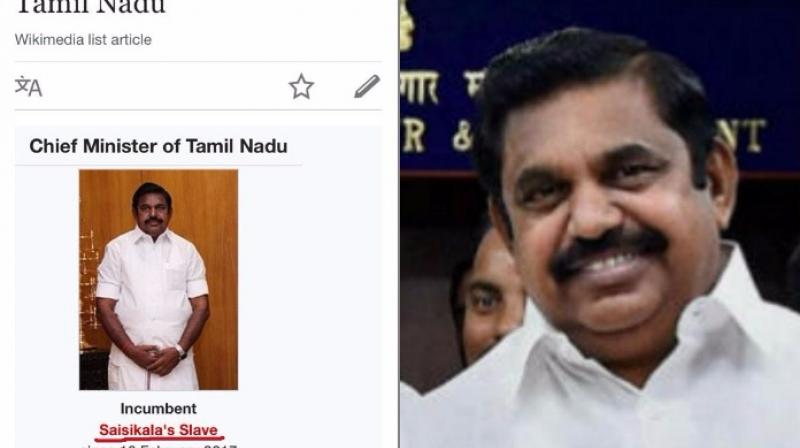 The battle for power in Tamil Nadu intensifies (Photo: Twitter)

Tamil Nadu politics has the nation's attention focused on the state yet again since the former CM Jayalalitha passed away and Jalikattu resulted in statewide protests, as a dramatic tussle for power between O Panneerselvam and VK Sasikala keeps surprising everyone watching with new twists.

After the Supreme Court convicted Sasikala, Palaniswami from her faction emerged as the new Chief Minister of Tamil Nadu and the social media was abuzz with people wondering who he was. As many must have flocked to Google him, someone changed the name on Palaniswami’s Wikipedia page to ‘Sasikala’s Slave’.

This is true. Type CM of Tamil Nadu and you will get this. pic.twitter.com/Xb0RCWLmRU

Twitter went berserk over it and images of another version also surfaced where Palaniswami was described as Mannargudi Mafia, indicating the closest aides of Sasikala.

The name has been corrected now, but the political storm in Tamil Nadu shows no signs of dying down anytime soon.