As part of a global heat and coral bleaching event spanning 2014-2017, the Reef experienced severe heat stress and bleaching again in 2017. 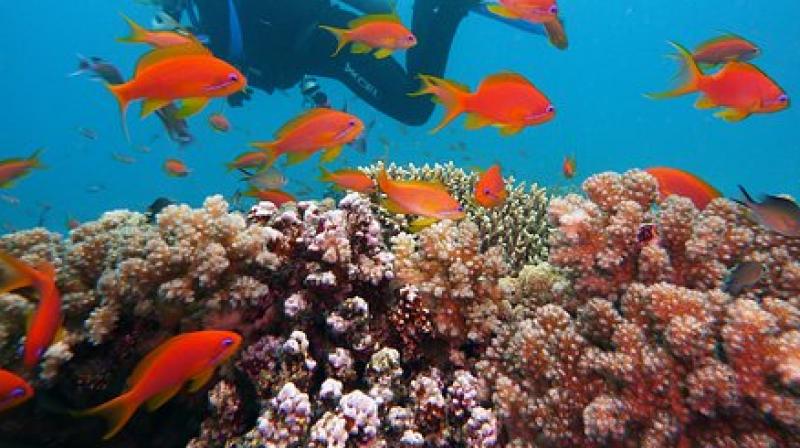 The Great Barrier Reef is certainly threatened by climate change, but it is not doomed if we deal quickly with greenhouse gas emissions. (Photo: Pixabay)

Scientists from the ARC Centre of Excellence for Coral Reef Studies (Coral CoE) in Australia mapped the geographical pattern of heat exposure from satellites.

They measured coral survival along the 2,300 kilometre length of the Great Barrier Reef, the world's largest reef system, following the extreme marine heatwave of 2016.

The study published in the journal Nature found that 29 per cent of the 3,863 reefs comprising the world's largest reef system lost two-thirds or more of their corals, transforming the ability of these reefs to sustain full ecological functioning.

"When corals bleach from a heatwave, they can either survive and regain their colour slowly as the temperature drops, or they can die," said Terry Hughes from ARC Centre of Excellence for Coral Reef Studies (Coral CoE).

"Averaged across the whole Great Barrier Reef, we lost 30 per cent of the corals in the nine month period between March and November 2016," said Hughes.

The amount of coral death the researchers measured was closely linked to the amount of bleaching and level of heat exposure, with the northern third of the Great Barrier Reef being the most severely affected.

"The coral die-off has caused radical changes in the mix of coral species on hundreds of individual reefs, where mature and diverse reef communities are being transformed into more degraded systems, with just a few tough species remaining," said Andrew Baird of Coral CoE at James Cook University.

"We are now at a point where we have lost close to half of the corals in shallow-water habitats across the northern two-thirds of the Great Barrier Reef due to back-to-back bleaching over two consecutive years," said Sean Connolly of Coral CoE at James Cook University.

"But, that still leaves a billion or so corals alive, and on average, they are tougher than the ones that died. We need to focus urgently on protecting the glass that is still half full, by helping these survivors to recover," said Hughes.

These findings reinforce the need for assessing the risk of a wide-scale collapse of reef ecosystems, especially if global action on climate change fails to limit warming to 1.5 to 2 degrees Celsius above pre-industrial levels.

The study is unique because it tests the emerging framework for the International Union for Conservation of Nature (IUCN) Red List of Ecosystems, which seeks to classify vulnerable ecosystems as 'safe,' 'threatened' or 'endangered.'

"The Great Barrier Reef is certainly threatened by climate change, but it is not doomed if we deal very quickly with greenhouse gas emissions. Our study shows that coral reefs are already shifting radically in response to unprecedented heatwaves," said Hughes.