TThe spectre of demonetisation queues at ATMs and banks returned to haunt citizens in many parts of the country. 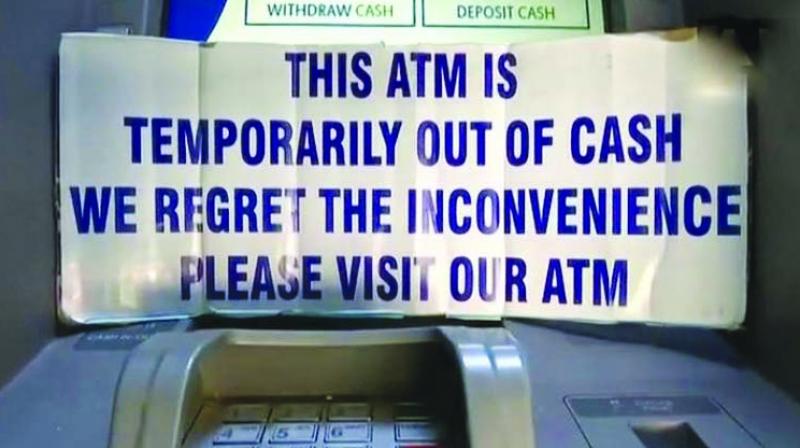 Various shades of opinion reflected the mood that swung to despondency giving way to the dark humour that goes with it.

TThe spectre of demonetisation queues at ATMs and banks returned to haunt citizens in many parts of the country. The warning signs had gone out early from Andhra and Telangana. But the RBI and the government seemed content in the belief that there was sufficient currency in circulation as the Rs 17 lakh crore cash in circulation matched pre-DeMon levels.

It is the common man who, however, knows what a cash crunch is. He sees it in a dry ATM with a notice saying “Out of cash” or “Out of order”. Signs like these sent panic levels up again as only from November 2016 onwards they had suffered long queues and some people even died while standing in line.

Tweeple came out with their knives sharpened when the phenomenon started recurring during festival time and, even more painfully, as the summer marriage season started rolling in.  Various shades of opinion reflected the mood that swung to despondency giving way to the dark humour that goes with it.

Is this the great “Cashless society” promised by the Prime Minister and his adjutants after the dramatic announcement of November 8, 2016? While the government says people are hoarding Rs 2,000 notes, innocent citizens are saying where do they have the money in the first place to have the luxury of hiding it?

The sarcasm of Tweeple says the tale best.

Sitaram Yechury@ SitaramYechury
Demonetisation did not kill terrorism. It did not kill corruption or fake currency either. But it has certainly killed the Indian economy. The cash crisis tells us how Modi's demonetisation disaster is still wreaking havoc.

Nidhi Razdan @Nidhi
Finally, we are a cashless economy

Lokesh Nara@naralokesh
It's very sad that, Hon'ble Finance Minister @arunjaitley ji is not understanding the reality, and saying every thing is good. AP is facing severe cash crunch. AP Govt is not able to even give the pensions and pay to MGNREGS workers.

Chetan Bhagat@chetan_bhagat
Oh dear. Is this what they meant by cashless society? People can't lay hands on their own money?

kssastry16@kssastry164
Something seriously wrong..Pls resolve the currency problem..more than 80% of ATMs in AP are like dumping rooms since demonitazation..if the problem is not resolved Central Govt can't face the resentment of public..

Rahul Deundi@RahulDeundi
U have made a mess of entire banking system of the country... All ur govt is good at doing is communal politics..hindu -muslim- sikh-christians. Seriously , its so difficult for common man to live peacefully

KTR@KTRTRS
Sir, with due respect the cash shortage in Banks & ATMs is neither sudden nor temporary. I've been hearing complaints for over 3 months repeatedly in Hyderabad Pls have RBI & Fin Min team dig deeper & not brush away an issue that is eroding people's confidence in banking system

Shirish Kunder@ ShirishKunder
Of course, it's temporary. Only one more year left. #CashCrunch

Varun@vprewa
Dear NAMO, Why should we be paying such huge banking charges to these bank if they can't keep enough cash for us in ATMs ?? Awaiting positive response. Regards Yours unfaithfully

SledgeHammer@crazydoozy
I understand FM that u r trying ur best to resolve the issue and I'm sure this will be resolved asap; but one thing is for sure that #Demonitisation was the bad move for Indian economy.... pls accept the mistake becos it has crippled Indian economy!

“India has been using internet since ages. In Mahabharata, Sanjay was blind but he narrated what was happening in the battlefield to Dhritarashtra anyway. This was due to internet and technology. Satellite also existed during that period.
We are an old culture and civilisation. This is nothing new to us,” said...Tripura CM, Biplab Deb