Demonstration at the Cannes Film festival to legalise abortion

On the marches in Cannes, mobilisation to defend ‘safe and free’ abortion. 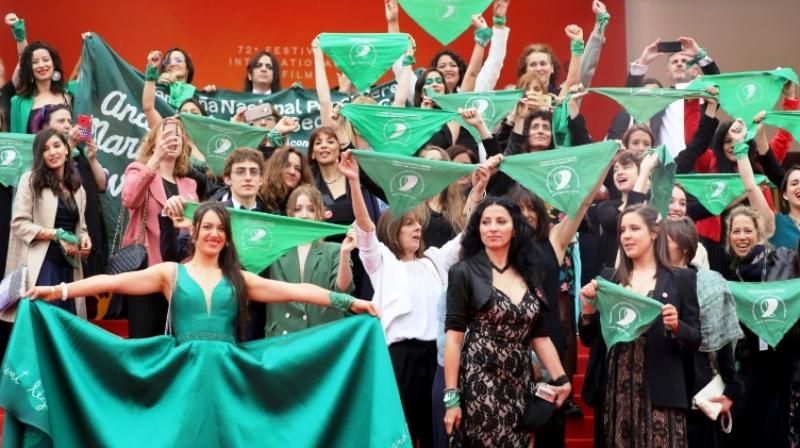 Filmmaker Pedro Almodovar and actress Penelope Cruz also supported the movement, wearing the famous green scarf, a few hours before this mobilisation, according to photos published by The Family Planning and the Women's Foundation on social networks. (Photo: AFP)

France: A demonstration, under the sign of the colour green, took place Saturday at the Cannes Film Festival to defend the abortion, before the presentation of the documentary ("Que sea ley") on the broken momentum of the Argentines in 2018, demanding the right to abortion.

Juan Solanas's film crew and women's rights activists climbed the steps of the Palais des Festivals, a green scarf in their hands, the emblem of the struggle for the legalisation of abortion that has engulfed Argentina in 2018.

They also waved a banner in Spanish demanding the right to abortion "safe and free". One of these demonstrators was entirely dressed in green, with a dress on which was embroidered "legalisation abortion".

Filmmaker Pedro Almodovar and actress Penelope Cruz also supported the movement, wearing the famous green scarf, a few hours before this mobilisation, according to photos published by The Family Planning and the Women's Foundation on social networks. For his film "Que sea ley" (A law, quickly!), Argentine Juan Solanas travelled for eight months to Argentina, to collect testimony in the most remote provinces of the capital.

The feminist mobilisations on the streets of Buenos Aires took in 2017 and 2018 an unprecedented scale, with as high as the gatherings before the Parliament, during the examination of the bill by the two rooms. In the end, it was adopted by the Chamber of Deputies but rejected by the Senate. In the screening room of "Que sea ley!” green scarves were placed on the back of each chair, an AFP journalist found.

Other personalities had to join this movement: the actresses Charlotte Gainsbourg, Julie Gayet, Rossi de Palma, Zabou Breitmann, the directors Claire Denis and Eric Caravaca, among others, announced that they would also wear the green scarf going up the steps of the Palais des Festivals.

Missouri wants to sue doctors if they perform interventions after the eighth week of pregnancy, Georgia as soon as the heartbeat of the fetus is detectable ... Asked on Friday about this, in the context of the "Women in Motion" talks, Eva Longoria ("Desperate Housewives") warned against a possible "domino effect".

It is a "threat" that "will affect everyone if we are not careful," said the actress who produced last year for Netflix the documentary "Reversing Roe", the name of the judgment "Roe V. Wade" which guarantees the right of American women to abort while the fetus is not viable.