Durga Puja 2018: A family idol that is never immersed

What makes puja stand out is fact that this is only place where idol of Durga is never immersed and is worshipped all round the year. 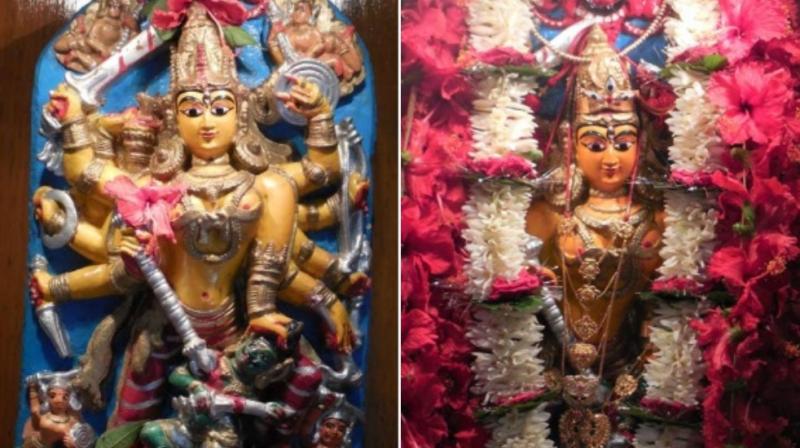 The idol is said to be almost 1000 years old, and was found 14 feet under the ground by one of the Haldar forefathers somewhere in Odisha. (Photo: www.baghbazarhaldarbari.com)

Kolkata: Durga Puja is the most anticipated festival in West Bengal, one of the many reasons for the wait is the grandeur that it brings along. The festival which is celebrated over a span of at least five days witnesses the city of Kolkata at its best - adorned with lights and Pandals which often have a message to convey.

Over the years, theme-based pandals have been the talking point in Kolkata. The Pandals draw inspiration from many aspects ranging from politics to social issues. However, what is losing its essence is the traditional Durga Puja. The divide between the traditional Puja and the modern theme-based Puja becomes distinct if one takes a round of the pandals in the southern part of the city, and moves to the north, which is known for clutching on to the rituals and the traditions of the Puja.

One such Durga Puja can be witnessed in the Haldar household in North Kolkata's Baghbazaar area. What makes Haldar Puja stand out is the fact that this is the only place where the idol of Durga is never immersed and is worshipped all round the year. The history attached to the Haldar Durga Puja is rich and intriguing. The idol is said to be almost 1000 years old, and was found 14 feet under the ground by one of the Haldar forefathers somewhere in Odisha, and is known to have survived the Mughal era.

The Idol has been since worshipped by the Haldars for more than 400 years, since the excavation. The idol at Haldarbari is made of "Kasthipathar" (Philosopher's Stone) instead of clay.

Regarding the excavation of the idol, Dr. Partha Sarathi, the eldest grandson of the Haldar Household said, "One of the forefathers of the Haldar family went for a trip to a palace named Sahebpur located near Balasore of Odisha. During his stay, some of the people who accompanied him dreamt of a Goddess instructing them to excavate her idol buried about 14 feet deep beneath the earth inside the house of a Muslim fisherman. The Goddess also instructed to worship her daily."

Following the divine order, the excavation was carried out and the idol of Devi Durga was recovered in perfect condition, unlike many other idols of that time.

Similar idols can be seen at British Museum, Chandannagar Museum and Institute as well as the Kolkata Museum, however, those idols are not in an unscathed condition.

Debasis Haldar, one of the eldest members of the household recalled some of the legends associated with the Puja. One of them is regarding the recovery of a Navaratna (Nine Gems) amulet which has been with the household since ages. "There is a Nabaratna Amulet at the Halder residence which is used during worship of the Goddess. It is sometimes kept under the feet of the Goddess and sometimes in the offering container ( Barandala ) of the Goddess. After the untimely demise of one of the family members, it was decided to sell off the amulet. The amulet was then sold. However, after three days the man who bought the amulet came back to return the amulet saying that he received a divine message from the Goddess in his dream to return the amulet. The gentleman handed it back and even refused to take the money that he paid for it," he said.

Scores of people pour in every year to witness the rituals and offer prayers to the Goddess Durga in Hakderbari. The 'Sondhi' Puja of the Halder household, which takes place on Ashtami, is one of the major attractions for many. On this day, the "Durga Dalan" or the Corridor is elaborately decorated with 108 lotus flowers and an equal number of lamps. The members of the family said that the design for the arrangement of the 108 lamps is conveyed to the eldest member through divine intervention.

The celebrations end with Sindur Khela on the day of Maha Dashami, after which the idol is placed facing the West for daily worship.