‘Udai’ bhav to a royal retreat

A recent poll has rated Udaipur as one of the three best cities in the world and this is not without reason. 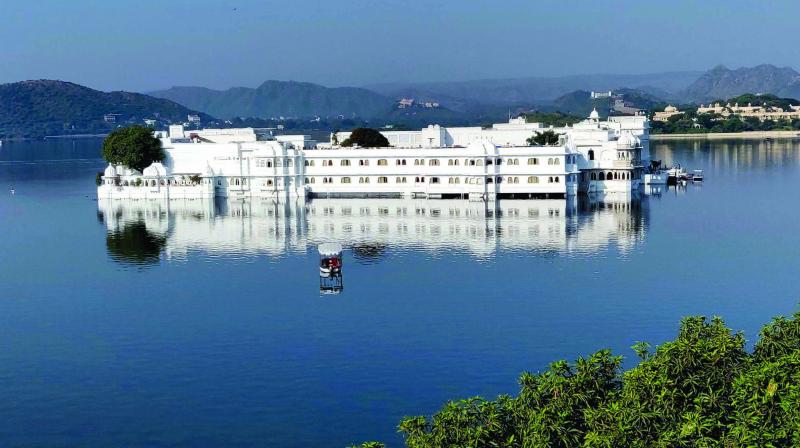 The amazing green cover of the city of Udaipur does not cease to amaze you. Naturally, sobriquets like ‘Venice of the East’ and ‘City of Lakes’ sit easy on its very able shoulders. With its carefully preserved rich and royal past, Udaipur is modern and traditional at the same time —  a destination like no other. 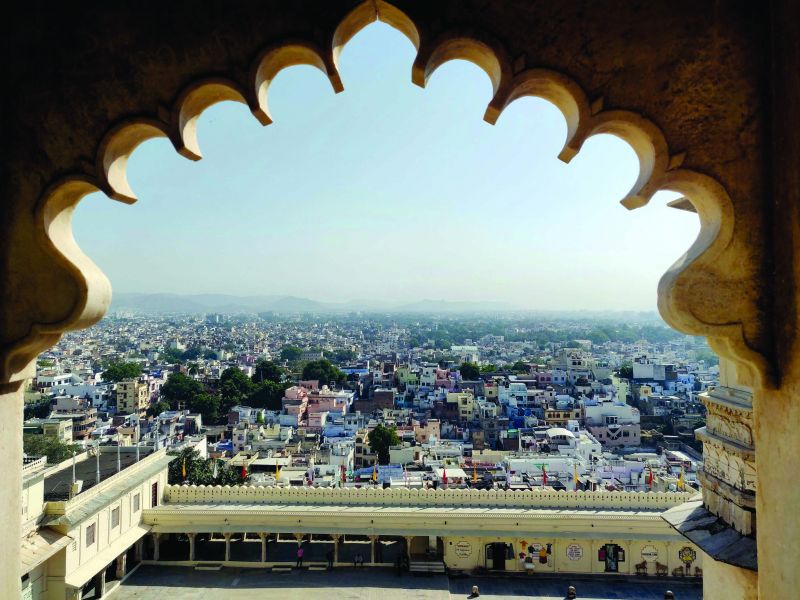 The city of Udaipur framed from the city palace 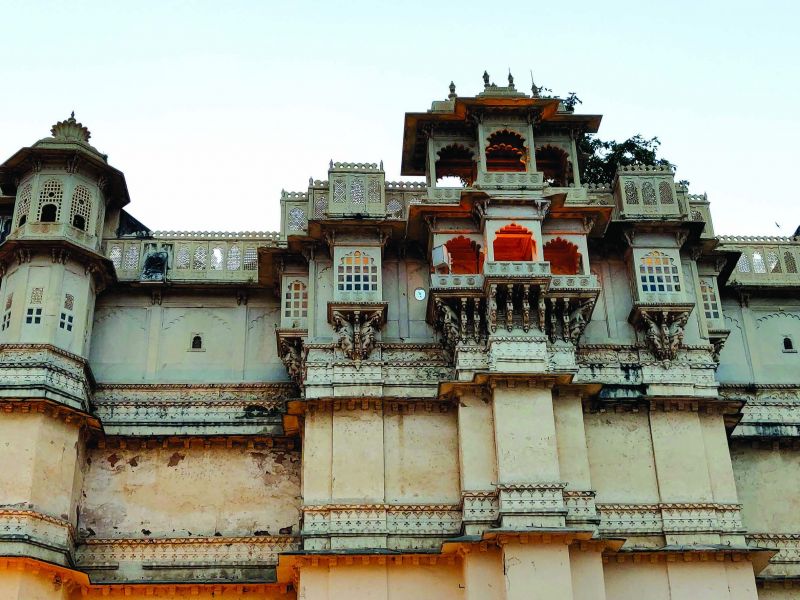 Palace Calling
Founded by Maharana Udai Singh II in 1559, the city is picturesquely set amidst artificial lakes, royal residences and framed by the majestic Aravalli Hills. At the heart of the vibrant city is the most visited and absolutely must-see spot, the stunning City Palace. The cream toned City Palace houses a museum that has an incredibly well-maintained collection of sculptures, antiques, inscriptions, textiles and more carefully preserved through centuries. This complex has a combination of four major and many minor palaces and overlooks the beautiful Lake Pichola. The entrance gate called Ganesh Deori or ‘Door of Lord Ganesha’ has an old painting of the elephant head God that was almost invisible at one point due to a thick layer of varnish. This has been restored after six months of work and you can see the attention to detail and conservation efforts right through the museum. Maintained and run by The Maharana of Mewar Charitable Foundation (MMCF), the various galleries include the Crystal Gallery, Silver Gallery, Music Gallery, Photo Gallery and Sculpture Gallery. The armoury has an impressive collection of arms and is being restored currently using the help of traditional sikligars or swordsmiths. Walking through the museum and navigating the ups and downs will bring you close to fantastic views of the city too. As Shriji Arvind Singh Mewar of Udaipur, the 76th Custodian of the House of Mewar says, “living heritage is very important and it is my priority to conserve the same. Udaipur is a very awakened city and each person feels connected to this concept here.” While you are here, you can take a boat ride on Lake Pichola boat where you can see the famed 18th century, white marble Lake Palace and the incredibly beautiful 17th century Jagmandir Palace  that used to be the former summer resort of the Maharanas. Located slightly outside the city is the 19th-century Monsoon Palace atop the Bansdara Hills in Sajjangarh. While this is largely in ruins, it is the place to head to for spectacular views of the city. 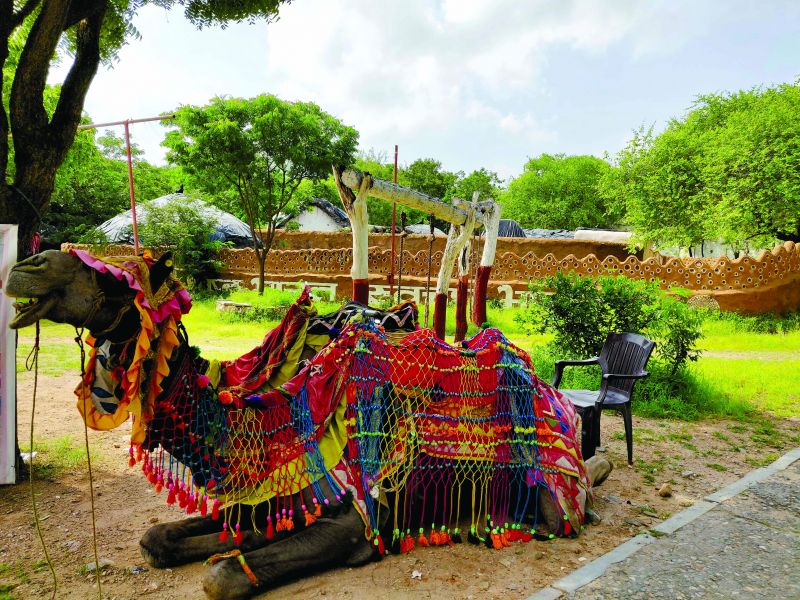 A camel rests in Shilpagram 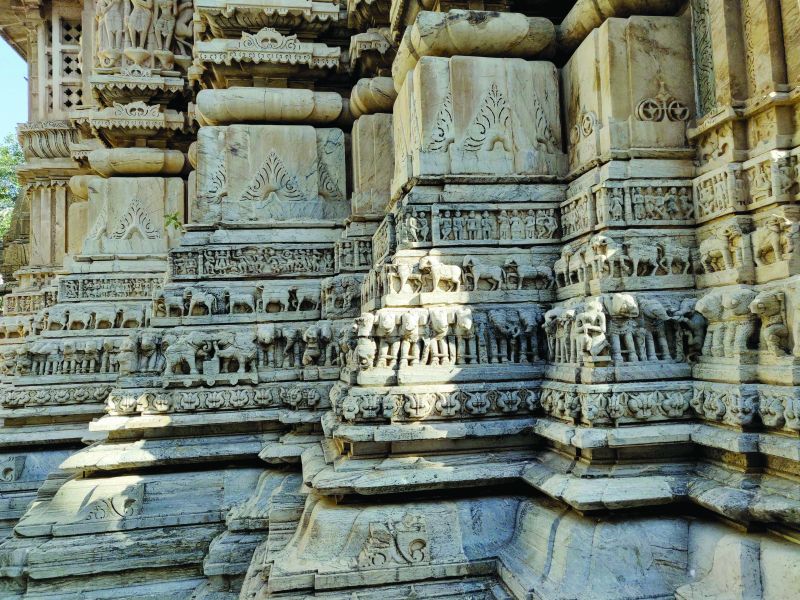 Sights & Sounds
The best way to experience the old city is on foot, through narrow bylanes around the City Palace. Dotted with numerous shops, most of which retail a lot of local art and craft, you need to carefully navigate your way through the streets that are bustling with activity and traffic. Do stop by at the towering 64 metre high Jagdish Temple dedicated to Lord Vishnu that has 35 steps to reach to the top, and was completed in 1651. The beauty of this temple lies in its stunning architecture and intricate carvings that cover its façade. Another pit stop must be at the Vintage & Classic Car Collection that has many vintage and classic vehicles that are maintained in immaculate condition. These cars include a 1930 Ford, 1946 Buick, MG TC 1946 and a pair of 1938/39 Cadillacs, and they are all owned by the Maharanas of Udaipur, and maintained by the MMCF. And if you want to relax amidst colourful flowering shrubs, head to the Saheliyon Ki Bari that translates to the Garden of the Maidens that offers a lotus pool, fountains, marble elephants and a small museum too. As a city that is known for its arts and crafts, Shilpgram a rural arts and crafts complex spread over a whopping 70 acres is a good place to visit as it is set as a living museum that shows the lifestyle of the craftsmen. This is also a good place to buy souvenirs. Over the years, the city has expanded with a few malls, several hotels and restaurants that offer good food and a great night life. Make sure you savour the many flavours of this beautiful city.