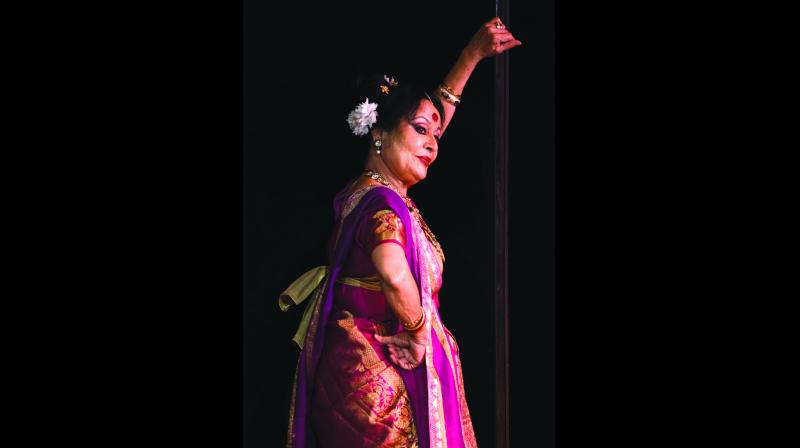 Long before she earned her Padma Vibhushan and became a Rajya Sabha member, Dr Sonal Mansingh was at the forefront of classical Indian dance performing artistes motivated to engage with Buddhist themes. Similarly, her explorations of consciousness raising that expanded interpretations of iconic women whose stories inform the Indian psyche have also been pioneering.

Her recent production Appa Deepo Bhava weaves together the warp and weft of both these threads. Princess Yashodhara, Nartaki, Sujata and Amrapali each have their life stories succinctly framed in the context of the pleasures and preoccupations of their lives. Each contributes to raising important issues and understanding that further Gautama Siddhartha’s path toward enlightenment and his teachings for us to follow.

Framed in a classic dance-drama format enriched by Sonalji’s sensibilities, each story was clearly etched by her Shri Kamakhya Kalapeeth Repertory group dancers as she, naturally, appeared as Nartaki and Amrapalli. In the past, I recall Sonalji’s tour de force solo performances on such themes and here we saw her effortless elan portraying court dancers while offering her students of Bharatanatyam the opportunity to share the stage with her and the Chhau-trained artistes.

Collaborative interactions with Mayurbhanj Chhau go back several decades, so the inclusion of Chhau-trained male dancers in the concept and choreography added energy to the festivities of Princess Yashodhara and Prince Siddharta’s marriage celebrations and the other episodes. The trio of Seraikella Chhau-trained dancers were well matched while the Mayurbhanj-trained artiste took on the role of Prince Siddhartha with the added flavour of Odissi in the choreography.

From marriage to the birth of son Rahul coinciding with Siddhartha’s realisation of the truth of human suffering in Samsara and his departure to seek enlightenment, we see a seamless precis of this chapter in the life of the Buddha. What made this unique was Sonalji’s introduction with the strength and understanding she conjectured Yashodha, as she contemplated the abandoned ornaments brought to her by his charioteer: “If you had confided in me before leaving on your quest, I would not have stopped you”.

Each vignette was introduced elegantly through Sonalji’s offstage narration, ensuring that the essential concept at the core of each episode was highlighted. Before Nartaki begins, the audience is reminded that the court dancers in the times of Lichchavi city-state republics were highly respected for their literary and philosophical knowledge as well as performance art. An observation that this Nartaki shares with her entourage is so profound in its simplicity that it inspires sanyasi Siddhartha to give up extremes and follow the “Middle Path”.

Nartaki’s entourage relaxes and plays on the banks of the river Niranjana. When Nartaki joins them and asks for her veena, the maid first over-tightens the string to the breaking point and then leaves the replaced string too loose to make a sound. Sonalji’s Nartaki then tunes it herself, commenting that, “Neither too tight nor too loose, maintaining balance is the key”. This happened to be within earshot of the meditating Buddha-to-be practicing extreme austerities nearby.

Sujata, the third significant woman in the life of the Buddha, the Enlightened One, then offers kheer, which is now accepted by Siddharatha, abandoning extremes to follow this Middle Path enabling him to soon reach enlightenment. Usually, we only see Sujata portrayed at the moment of offering, but here a charming backstory has been conceptualised.

A childless Sujata promises an offering of kheer to the Spirit of the Forest if she conceives. An engaging vignette of village life depicts Sujata and her husband in their daily activities both before and after awareness of the lotus blooming and the birth of her son. Reminded of her vow, she mistakes Gautama Siddhartha for a vana-devata who accepts her offering. The narration goes further to share that the bowl was thrown in the river with the vow that he would achieve enlightenment in days if it floated upstream — which it did and he did!

The culminating episode of Dr Sonal Mansingh’s concept, direction, narration and choreography was her portrayal of the beautiful court dancer and musician, Amrapali. As with the introduction to Nartaki, Sonalji shared the high level of respect held by such a court dancer of the time, entitled along with the Raj Guru to the right of a royal umbrella. A deeply experienced human being with a compassionate heart and power of observation, Amrapali was auspicious for the city-state republic of Vaishali.

Receptive to the advances of Ajatashatru, King of Magadh before his successful and bloody attacks on her beloved Vaishali, she rejects the victorious conqueror to have the Order of Nuns created by the Buddha in accepting her renunciation. The stark post-battle images and succinct presentation of this and earlier stories were complimented by aesthetic and frequent costume changes and an excellent musical score.

The exceptionally fine supporting music was composed by Pandit Shubhendra Rao and Saskia Rao de Haas. I was totally struck by the quality of the music before seeing their names in the credits. I asked Saskia afterwards about this collaborative process. Over the two-three months needed to create the music, she spoke of the valuable and beautiful experience of working with Sonalji, a masterful storyteller who could communicate the stories and ideas behind the composition in a complete form with clear images.

More than the abstract mood of a raga, the nuances of emotion to be brought out in the music required several back and forth sessions to match visions and shape details in the music. Sonalji and Saskia emphasised full commitment from both sides as this kind of production takes more collaboration than it generally would in the West where either music or dance would be created first rather than developed side by side. Their orchestration techniques produce a more melodic content, devoid of electronic instruments. The soundscapes of fire, cooking, a baby crying, et al were accompanied by minimal percussion, highlighting the awareness of every sound that was present. As this was the second time Saskia and Shubhendra have collaborated with Sonalji, I look forward to the third.

As this production travels to Bhutan next and I think Mongolia thereafter, it will serve as a fine introduction and/or reinforcement of diverse audiences’ appreciation of significant women in the life of Gautama Siddhartha Buddha. Om Mani Padme Hung.