Bengal Foundation Festival presents a list of who’s who

Entry to this event is free but the organisers keep a strict check on registration of listeners who pour in through the night. 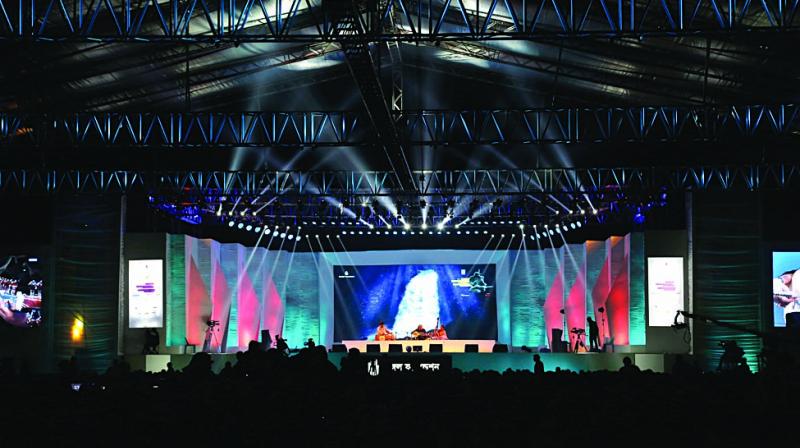 Participating artistes reads like a who’s who of North Indian classical musicians.

Classical musicians in India are in total awe of the phenomenon that happened in nearby Dhaka. In its 6th year, the annual Bengal Foundation Festival is today the single largest Indian classical music and dance festival in the world, boasting of a record, up to 60,000 audience! What makes this event so incredible is the fact that for the last 40 years, political disruptions in Bangladesh have really not been conducive to nurturing classical arts which, no doubt, were immensely popular in what was then East Pakistan, and yet a new generation of music lovers has sprung up, despite not having been exposed so much to live classical music! Even Carnatic music is hugely popular with several top Carnatic artistes like Aruna Sairam, Bombay Jayashri, Ganesh Kumaresh and Shashank Subramanyam having performed.

Held annually in Dhaka, mostly in the last week of November, and though a private initiative of Chairman Abul Khair, known as “Lituji”, the festival is supported by Bangladesh’s government establishment. Khair said that promoting a combination of all the art forms - visual art, music, theatre, cinema and architecture - can bring about a total cultural revolution that can transform human lives. This year, the festival is from 26th December-30th December.

Participating artistes reads like a who’s who of North Indian classical musicians. There would be few classical musicians who have not performed on this stage – from late Gaansaraswati Kishori Amonkar, late Vidushi Girija Devi, Ustad Amjad Ali Khan, Ustad Zakir Hussain to younger stars like Kaushiki Chakraborty, Amaan and Ayaan Ali Khan, Rahul Sharma and many more.

The scale of operation is staggering — each all night session features approx 5-7 artistes per night, and with the accompanyists, this totals approx 80-100 artistes for the festival whose visas, travel arrangements, stay, transport etc have to be organised with precision and perfection. The organising team works up to 14 hours a day. Luva Nahid Chaudhary, Director General of the Foundation, has been in charge of the festival since its inception, and despite huge security concerns this year, and the change of venue from the Army Stadium to Abahani Grounds is confident of an impressive event.

Entry to this event is free but the organisers keep a strict check on registration of listeners who pour in through the night. There is sale of CDs, various types of eateries, places to unwind — the huge venue is transformed during the festival into a lively buzzing well lit-up Mecca.

The huge stage, several gigantic TV screens all over the venue and strict security points add up to an all most military style operation. In the front 20 rows are the crème de la crème of Dhaka society – ambassadors, generals and judges, the ladies elegant in their crisp Dhaka cottons or chiffons. Behind sit the general public, mostly youngsters. 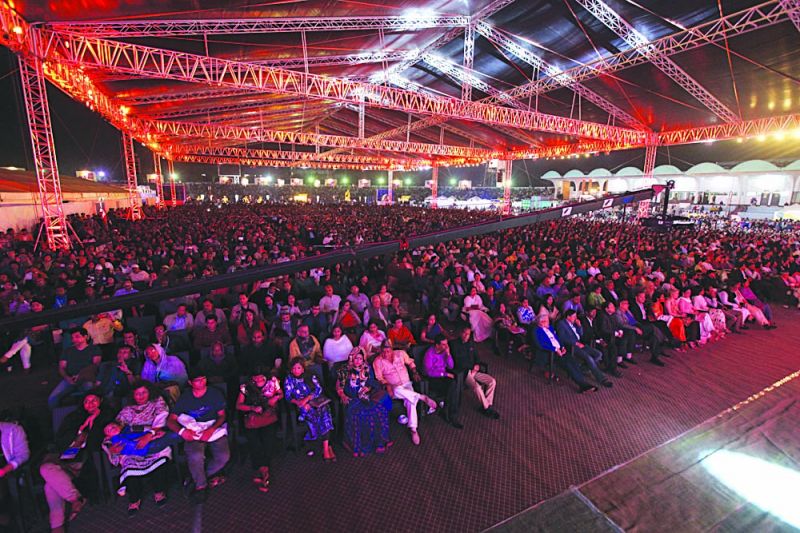 It is incredible to witness hundreds lining up at 3 am to enter the venue, just in time to hear Pt Hari Prasad Chaurasia or other famous artiste.

Artistes across the board are overwhelmed by this festival. Tejendra N Mazumdar the only solo instrumentalist who has played every year since the inception of the event said, “This the largest Indian classical music festival in the world, the sheer numbers are incredible”. (This year he performs with Carnatic violinist Mysore Manjunath on 29th).

Echoing similar thoughts is sitarist Purbayan Chatterji. He said, “The Bengal Foundation has fast emerged into one of the largest classical music festivals in the world; my heart swells with pride to think that our classical music can produce such mass hysteria.” (Purbayan is slated to play on 26th December with flautist Rakesh Chaurasia)

As in earlier years, a platform is given to younger artistes as well. Dhaka-based Rajrupa Chowdhury who represents the sarod tradition of Bangladesh born Pt Radhika Mohan Maitra is a particularly apt choice, as is sarodiya Abir Hosain, from the same tradition.

Vocalist Brajeshwar Mukherjee and Firoz Khan on sitar are other worthy artistes. Cellist Saskia Rao de Haas is an unusual choice. Carnatic tradition is represented by Dr L Subramaniam, with the Asthana Symphony Orchestra, and the great percussionist Vidwan Vikku Vinayakram and his son Selva Ganesh on khanjira. Dance, among others, is represented by kathak exponent Aditi Mangaldas and her team and Odissi by Sujata Mohapatra.

Indeed, the Bengal Foundation’s patronage of the classical arts is not confined just to an annual festival. In 2014, it set up a school called Bengal Parampara Sangeetalaya for classical music where Indian legends teach. Taal Yogi Pt Suresh Talwalkar teaches tabla, Pt Ulhas Kashalkar vocal, Tejendra N Mazumdar sarod, Kushal Das sitar, and Uday Bhawalkar dhrupad. The school today has around 60 students who are taught in Guru Shishya Parampara. Sanjeevani Kashalkar, Head of Administration of the school since its inception, said, “The teaching now is through skype by the tutors, but only live by the 5 gurus”.

Pt Ulhas Kashalkar, who initially helped set up the school, said,  “I have been associated with the Bengal Foundation since the inception of the festival and it has got better every year. The audience, which is steadily growing, has been appreciative of several of my students who have performed on this stage over the last 5 years.”

One wishes the same scale of patronage, state as well as private, existed in India, the motherland of classical music.