Speaking at fifth Agyeya Memorial Lecture on ‘Struggle for Language’, litterateur talks about language’s struggle against itself. 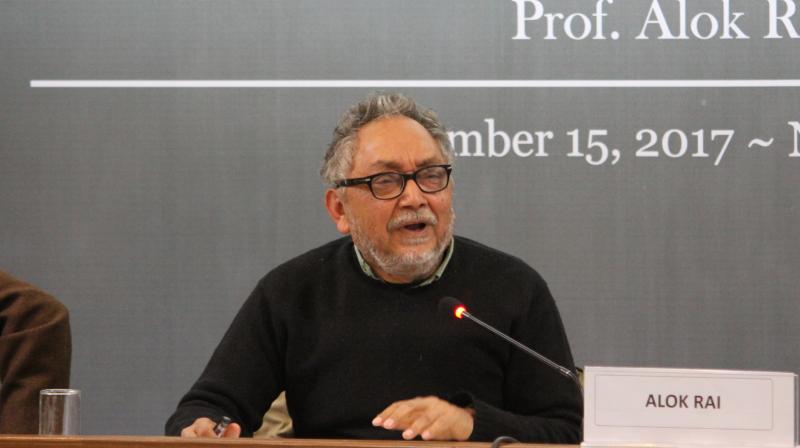 Literature is a good place to register something that is fundamental to the nature of language, Rai noted.

New Delhi: Language is inextricably linked with dynamics of power and resistance and can provide a profoundly unsettling perspective on the distortions, perversities and unjust domination of regimes, according to eminent writer and critic Prof. Alok Rai.

“Language is a mirror or a window into our condition and it is also a strong weapon and tool of resistance. Literature is a good place to register something that is fundamental to the nature of language,” he noted.

Prof. Rai, who taught English literature at Allahabad University and Delhi University and was also the Head of the Department of Humanities at IIT Delhi, was delivering the fifth Agyeya Memorial Lecture on ‘Struggle for Language’, organised by the Raza Foundation last weekend.

“But language itself struggles; it struggles for existence amid the lies and noisy distortions. The struggle for language is, simultaneously and paradoxically, a struggle against language. This happens in at least two senses. In one sense, it is the poet’s struggle against the seduction of language. The other struggle is against the perversion of language, by rampant abuse, by the common traffic in imprecision and lies, in hypocrisy and mendacity,” said Prof. Rai, who is grandson of towering Hindi writer Premchand.

Raza Foundation Managing Trustee Ashok Vajpeyi, in his introductory remarks, noted that Prof. Rai is an active scholar and not confined to tranquility and meditation. “As a scholar and an important critic, he keeps interfering in the scene,” he observed.

In his stimulating 45-minute talk, Prof. Rai sought to build a premise for his contention in the Indian context by drawing a cricketing analogy and the rechristening of Gurgaon in Haryana to Gurugram.

“The Gurugram phenomenon – the Sanskritic spicing of smelly old Gurgaon – is merely farcical. Normally, this kind of symbolic politics involves little more than pots of paints, yardage for flags, taller flagpoles, very tall statues. But when this kind of farcical exercise takes over from the real, urgent and neglected tasks of governance, it is time to look deeper. Via language,” he contended.

Describing the renaming of Gurgaon as “our clue to retrograde nationalism”, he said, “Gurugram seeks to return to some imagined monkish moment when Aryan celibates walked the land and punished the apsaras who tried to seduce them…It is dedicated to the recovery of some prior, already-achieved nation, and so is fundamentally different from a future-oriented nationalism – committed to becoming a nation that addresses the needs and desires of all its members.”

As for the cricketing analogy to illustrate his contention that the struggle for language is also a struggle against language and how language is formed and deformed, Prof. Rai cited the term ‘Team India’, a ubiquitous, innocent-seeming phrase, rather than the ‘Indian Team’.

The term ‘Indian Team’, according to him, is specific and can refer only to the specific players who are part of the squad. But ‘Team India’ is inclusive and “we are, willy-nilly, a part of it. …Team India encodes the nationalistic assumption that India itself is a team with harmonious complementarities’, conveniently overlooking the diversities, disharmonies and discords of a nation, he said, adding: “Selling this ‘nationalism’ via cricket is seductive.

However, despite the seductive and treacherous nature of language, it is important to insist that the political struggle must still be a struggle for language – the struggle for a more sensitive, truthful language, a language that is attentive and adequate to the delicate contours of our lives.

“I think of this as the poet’s task. But it is also the task of linguist, as also that of the citizen in this time of post-truth and the rising tide of bullshit to insist on calling out lies, even if it is controversial to do so,” said Prof. Rai, whose publications include translation of Premchand’s Nirmala into English and Hindi Nationalism.

There is yet another sense in which the struggle must be for language, he said. “Language is a mode of contention and resolution and a possible useful corrective for the distortions of our times…It is the only civilised alternative to perpetual warring over our wonderful and/or maddening, but certainly inescapable, differences. Or else, we can all start rolling up our sleeves,” he noted.

Literature deploys the magic of language in order to persuade, to widen the circles of sympathy,   enlarge the range of human beings. “One thinks of Saratchandra’s women, of Premchand’s peasants, of Gopinath Mohanty’s forest dwellers. But it is important not to romanticize this power, important to remain somewhat suspicious of the magic of narrative and of language. There is an entire literature of colonial glorification, which casts a romantic light on its integral violence by styling it as high adventure and as civilization,” said the writer..

Stressing the Intersection between language and politics, he said it is wrong to perceive that literature or poetry is entertainment, escape, indulgence – merely cosmetic stuff, compared with the ‘real’ world. “This aesthetic fastidiousness seriously misrepresents the seriousness of art, of poetry, of language. It can be a primary means of access to the reality of extraordinary times,” he added.

The talk was the latest in a clutch of eight memorial lectures organised yearly by the Raza Foundation at the India Habitat Centre. The thought-provoking talks are dedicated to Kumar Gandharva, Habib Tanvir, Mani Kaul, Kelucharan Mohapatra, Agyeya, Daya Krishna, V.S Gaitonde and Charles Correa.