Kai, as a documentary theatre practitioner deals with documents, which have a mass impact and require extra investigation to produce a play. 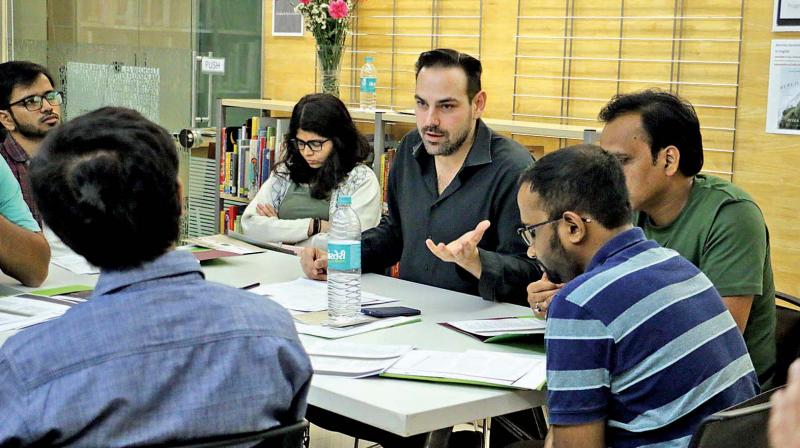 German documentary theatre director Kai Tuchmann talks about his real and research based theatre practices, evolution of this genre of theatre and why it should be made a part of the school syllabus.

In November 2018, a Chinese professor He Jiankui claimed that he used the gene-editing tool CRISPR, to make the world’s first genetically edited babies resulting into the birth of twin girls with pseudonyms Lulu and Nana. This move triggered a flurry of backlash and concern in the scientific community as well as the research world. While no one was directely affected by this case, German documentary theatre director Kai Tuchmann is still intrigued by the piece of mass  circulation of the information. Kai as a documentary theatre practitioner deals with documents, which have a mass impact and require extra investigation to produce a play. “This piece of information has the essence to change human nature. That interesting bit of news kept my attention, because it brings forth the question of one of the oldest discovery of man,” says Kai who is in India to conduct the ongoing Documentary Theatre Workshop – Starting Realities.

In addition to his theatre practice, he further says, “I try to use mass produced documents, information or doubt, which has a theatrical question in conventional setting.” And about the selection of this particular topic for the workshop, Kai relates it to his own identity as he has been working in China as a theatre trainer and spends about seven months a year in the country. “I picked up this topic to match my identity because I am a part of China and want to see what will be the resonance of this in India,” he gushes.

Documentary theatre that evolved in the early 19th century uses pre-existing documents and source materials for stories about real events and people. This theatre style is also referred to as verbatim theatre or investigative theatre. Kai informs that this particular form of theatre was a reaction to the film industry, which was reporting the news through newsreels. For Kai, in his own practice, he is more attached to history, which has a lot to do with common people. “I was intrigued by how this mass circulation of information changed the society and found it very meaningful to pursue,” recalls the director.

Kai initially didn’t get started with this form of theatre but was actually trained in the drama academy founded by the much-revered German theatre practitioner Bertolt Brecht and his students. “I was a very good student which is a bad thing,” he quips, adding, that at one point, he was disappointed for practicing one skill every day. “It was difficult for me to deal with something which has the same process from the beginning to end, and documentary theatre for me is a way of practicing my craftsmanship, skills, profession that allows me to know more after the rehearsal process,” explains the director.

His quest for working with research-based and thoughtful documents that engage people, led him to produce his first production based on the oldest refugee camp established in 1955 for German soldiers coming back from Russian imprisonment. “This place produces a lot of documents, though I didn’t want to work on the history of the place. I wanted to understand how the German public discourse represented this place,” explains the director. For this performance, Kai hosted audiences from different refugee camps, agencies, NGOs, and group of voluntary students. “I want to make the stage for everyone, not just for amateurs. I wanted to make it more like an aesthetic experience.

While for many, theatre is mainly to entertain the audience, one wonders how Kai’s intellectually heavy, and research-oriented performances keep the audience to their seats. Kai rationalises this popular saying by explaining that this form of theatre is practiced at an individual and intimate spaces “though big community theatre practitioners too, are using the techniques of documentary theatre these days.” Kai also advocates the audience that has never been to the theatre and he is trying to open a new kind of theatre experience for them. “Though this theatre is more or less for intellectuals because the topics are exhausting and serious, one should never underestimate the general audience. If you have a need to communicate, the audience will understand,” believes the director.

Meanwhile, during the workshop in the city, Kai showcased a video clip of a Chinese professor, followed by a task to retell the video clip’s story through fairytale, political manifestos and science fiction stories by the participants. Asked if these kinds of workshops will help in developing documentary theatre, Kai believes that all the post-dramatic theatres have potentials to survive and grow. “Documentary theatre is a post-modernistic theatre and actually tries to deal with institutional barriers and lower them,” says the director. He backs his thought with an example of the majority of classic tales where one heterosexual male is having a conflict with some other heterosexual male and then the whole business of acting, directing and running a theatre company turns into this cannon, attracting political assumptions, “I think documentary theatre is to critic that setting.” Can this be a part of the syllabus? “Clearly it should be, students should make their own choices between traditional and theatre of reality,” concludes the director.