For over a century, researchers have proposed different methods used by the ancient Egyptians to align the pyramids. 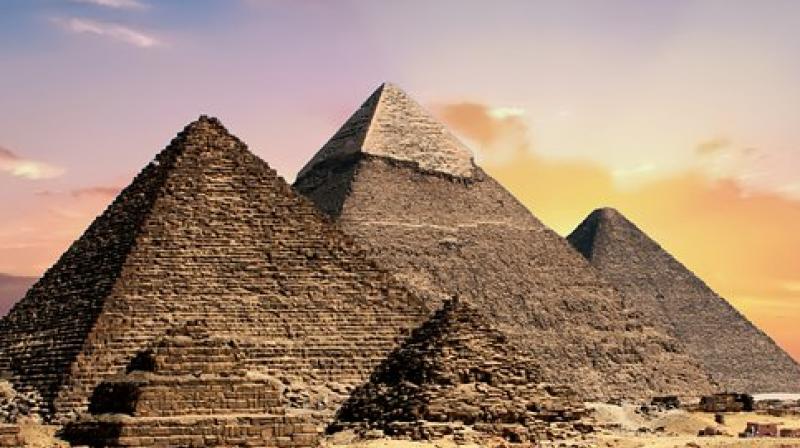 The Great Pyramid of Giza was constructed about 4,500 years ago, under the orders of Egyptian pharaoh Khufu. (Photo: Pixabay)

Ancient Egyptians may have used the autumn equinox to align the Great Pyramid of Giza almost perfectly along the four cardinal points, a study has found.

The autumn equinox occurs halfway between the summer and winter solstices, when Earth's tilt is such that the length of the day and night are almost the same.

The Great Pyramid of Giza was constructed about 4,500 years ago, under the orders of Egyptian pharaoh Khufu.

It is the largest of the three pyramids - standing about 138 metres - on the Giza Plateau and was considered a "wonder of the world" by ancient writers.

"The builders of the Great Pyramid of Khufu aligned the great monument to the cardinal points with an accuracy of better than four minutes of arc, or one-fifteenth of one degree," according to Glen Dash, an engineer who studies the Giza pyramids.

The pyramid of Khafre (also located at Giza) and the Red Pyramid (located at the site of Dahshur) are also aligned with a high degree of accuracy, Dash noted.

"All three pyramids exhibit the same manner of error; they are rotated slightly counterclockwise from the cardinal points," Dash wrote in a study published in the Journal of Ancient Egyptian Architecture.

For over a century, researchers have proposed different methods used by the ancient Egyptians to align the pyramids along these cardinal points with such accuracy.

Dash discovered a method that makes use of the fall equinox could have been used, the 'Live Science' reported.

In an experiment conducted on September 22, 2016 (the day of the autumn equinox), Dash placed a rod on a wooden platform and marked the location of the rod's shadow throughout the day.

"On the equinox, the surveyor will find that the tip of the shadow runs in a straight line and nearly perfectly east-west," Dash wrote.

The degree of error is slightly counterclockwise, similar to the error found in the Great Pyramid, Khafre Pyramid and Red Pyramid, Dash found. The tilt of Earth on the fall equinox allows the shadow to run in this east-west direction.