Meet the artists who represented India at the Middle East’s most influential art fair — Art Bahrain Across Borders (ArtBAB). 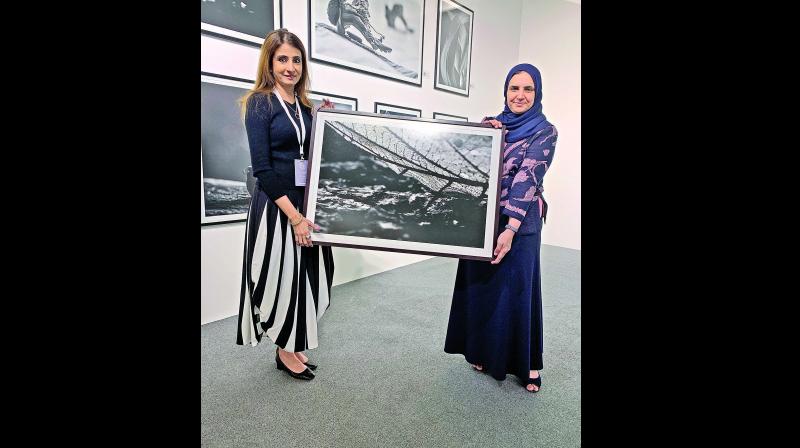 One of the most prestigious and influential art fairs of the Middle East, Art Bahrain Across Borders (ArtBAB), has over the years brought colours and stories from across the world under one roof in Bahrain. Its fourth edition, held last month, presented a global showcase of 16 prominent galleries from 11 countries around the world and among them was Mumbai’s Cosmic Heart Gallery.

Amongst the diverse range of exhibition concepts, highlighting the work of both established fine artists and young emerging artists, were paintings and photographs of artist Natasha Lalla and photographer Shailan Parker.

According to Jalpa H. Vithalani, creative head & director, Cosmic Heart Gallery, ArtBAB is a beautiful platform with a stylised art space. “They bring in art collectors from around the world building a creative space. And since I also work with international artists like Iran Culture House, I too believe we can easily create a world without borders with art and culture, just like ArtBAB. When there is no language, there are no borders,” smiles Jalpa.

Bahrain’s foremost contemporary art fair with the mission to attract leading international galleries to the Kingdom, ArtBAB is the bridge between Bahrain and the world held under the patronage of her royal highness princess Sabeeka Bint Ibrahim Al Khalifa, wife of his majesty the king of Bahrain.

“She is an amazing patron of art and culture,” says Jalpa about the princess.

Since the art connoisseur chose to take two distinct artists, they happened to be the only gallery present at the fair to showcase black and white photography. On adhering to the theme — Legacies  — Jalpa describes the work of both the artists as contemporary abstract art in synch with the theme.

“I highlighted a contrast of monochromatic and polychromatic works of art because Shailan’s photography is black and white. It is stunning, it is his narrative with light and as light revolves, his story evolves with nature. It is his journey and love for nature,” she shares.

Called Luminescence: Emission of Light, it is Shailan’s visual narrative with light that is a balance of skill, technique and art. His series is a tactile exploration of the natural.

Talking about Natasha, the 46-year-old connoisseur says that Natasha is one in a million artist who paints with her fingers.

“She is brilliant in her play of colour and she is unleashing a host of universal creative energies bec-ause each of her canvases is a masterpiece. Her stunning work transports you. Her series called Horizon is very three-dimensional because the more we expand our horizon, the larger is the understanding of life and that brings a flow in life,” smiles Jalpa, adding that Natasha’s work was widely appreciated.

For Natasha, each of her artwork is basically the universal energy and the entire experience, spiritual. Though as a child she started painting with a brush, she moved onto painting with her fingers as she found it the only way to transfer her energies on the canvas.

“The reason I work with fingers is that I can take the energy that flows through my finger and put it on the canvas with much ease. It is transference whereas a brush comes in my way, and the flow changes,” says Natasha. The artist who loves using colours and works only on energies, for her series Horizon used a lot of red, purple, gold, silver and green.

“There are so many colours used in my work but a piece of art appeals to you because it resonates with your energy,” she adds.

Happy to have presented work from India at ArtBAB, Jalpa calls it a conscious choice to have taken Indian artist to Bahrain.

At present, she is working with village artists in Ranthambore area on a collection of paintings featuring tigers that will be launched soon along with princess Diya Kumari.