Harry and Meghan go straight to work after lavish wedding

The section "About the Duchess of Sussex" notes her activism from an early age, as well as her work with UN Women. 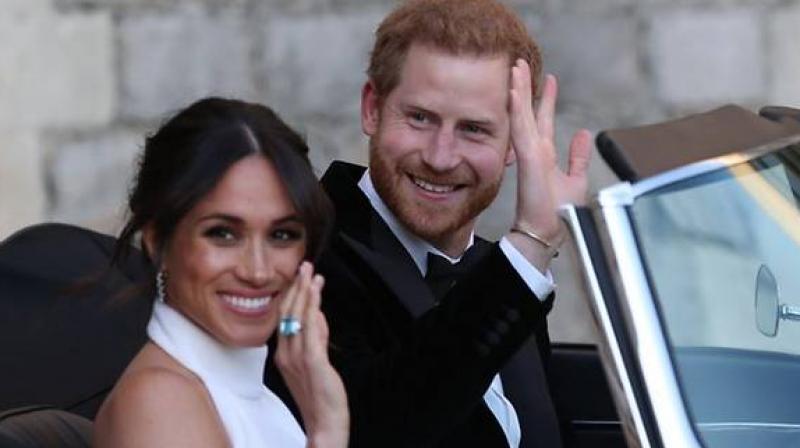 The section "About the Duchess of Sussex" notes her activism from an early age, as well as her work with UN Women. (Photo: AFP)

Prince Harry and his new wife Meghan began married life on Sunday (May 20) after their spectacular, rule-breaking wedding, but will be delaying a honeymoon as they turn immediately to royal duties.

The newly ennobled Duke and Duchess of Sussex staged a huge party after the ceremony on Saturday at Windsor Castle, where they were greeted by around 100,000 people lining the streets and watched by millions around the world.

The beaming couple were seen driving to the evening bash in a vintage Jaguar, Meghan having changed from her sweeping Givenchy wedding gown into a sleek Stella McCartney halterneck dress, with Harry switching his military frockcoat for black tie.

On the bride's finger was a large aquamarine ring, which belonged to Harry's beloved late mother, Diana.

Details of the bash, hosted by Prince Charles in a house on the castle grounds for 200 close friends and family, were a top secret although fireworks were seen over Windsor late in the evening.

Some of the celebrities who attended the earlier service, including George Clooney and tennis star Serena Williams, were also spotted heading in.

The wedding was unlike no other the royal family has ever staged, a mix of the pageantry that Britain does so well, with celebrity razzmatazz and African-American culture.

In a ceremony filled with laughs and not a few tears, the couple held hands throughout, and the prince was visibly emotional as he greeted his bride at the altar saying: "You look amazing."

A gospel choir sang "Stand By Me" and US pastor Michael Curry delivered a passionate, lengthy address about the power of love, referencing slavery.

Meghan, a mixed-race television actress, also made her mark by walking up the aisle partly on her own, and giving a speech at the evening reception.

"Kisstory: Harry & Meg's historic change for monarchy," headlined The Sun on Sunday, with a photograph of the couple kissing on the steps of St George's Chapel.

"If ever there was a wedding to symbolise modern, multi-cultural, multi-racial Britain, yesterday's was it," the Sunday Mirror wrote in an editorial.

"Disney could not have come up with a better princess," said the Sunday Telegraph, while The Mail on Sunday simply said: "Harry ever after!"

After staying at Windsor overnight, Harry and Meghan were due to return to their home at Kensington Palace in London.

They will not be taking a honeymoon immediately, as they are scheduled to attend a garden party for Harry's father Prince Charles, the heir to the throne, at Buckingham Palace on Tuesday.

Meghan and Charles have reportedly forged a strong bond, and he stepped in to escort her to the altar at the wedding after her own father pulled out following a media furore and subsequent heart surgery.

Charles also invited Meghan's mother Doria Ragland, the only member of the Markle family to attend the wedding, for tea before the big day and chatted to her in the church.

"Thank you to everyone who came to Windsor and those who followed from around the UK, the Commonwealth, and the world," said an @RoyalFamily tweet.

As a formal member of the royal family, Meghan now has her own section of the royal.uk website, which highlights her charity work - and plays down her acting career.

The section "About the Duchess of Sussex" notes her activism from an early age, as well as her work with UN Women, One Young World and World Vision, with only a passing reference to "filming in Toronto".

The biography section offers a few more details about Meghan's near 15-year career as an actress, including in hit US television series "Suits", shot in Toronto.

It also references her lifestyle blog, The Tig - which, like her acting, she has given up to join the House of Windsor.