We get experts to give their take on a current issue each week and lend their perspective on a much-discussed topic. 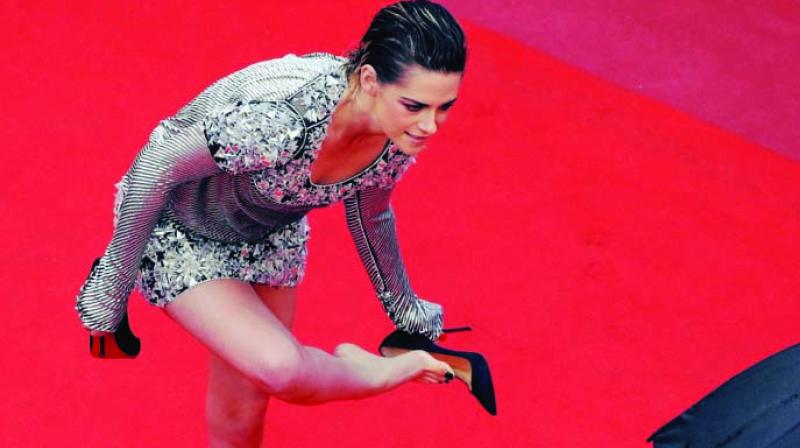 Actress Kristen Stewart ditched her sky-high Louboutins to climb the stairs before the premiere of Spike Lee’s BlacKkKlansman, seemingly in protest at the strict dress code of the French festival.

In a rebellious act at the Cannes Film Festival, actress Kristen Stewart ditched her sky-high Louboutins to climb the stairs before the premiere of Spike Lee’s BlacKkKlansman, seemingly in protest at the strict dress code of the French festival.

The Cannes red carpet has become infamous in recent years for its high heels-only policy, with actresses speaking out against it. In 2016, Julia Roberts went barefoot on the Cannes red carpet and a year ago, A Quiet Place actor Emily Blunt criticised the ‘no-flats’ rule. The high-profile rebellions against the dress code seem to stem from a 2015 incident wherein middle-aged women wearing rhinestone flats were turned away from a screening of the film Carol. The festival cited the “obligatory heels” policy in response to the outrage.

Now, with more actors taking a stand against the unequal wardrobe guidelines and uptight, strict fashion rules at the festival, we talk to gender activists, social thinkers and actors about the dress-code double standards for  men and women and ask isn’t it time for a change.

Fashion policing
Anil Dharkar, Social Thinker
This is a silly rule. Why should a woman be forced to wear high heels? It is ok that they are expected to wear fashionable clothes and there’s a formal dress code policy for men (black tie) and women (gown). But taking fashion policing to the next level and discrimination against women’s attire is a different matter. Tennis tournaments have dress code policy but that is only about white colour and not a type of attire. The Cannes festival authorities should understand that they are dealing with adults and if they have reached that level, they know how to respect the occasion with their attire. Dress code policy is usually meant to add elegance to the occasion. They only need to specify the formal-wear policy. The rest should be left to the attendees.

‘Imposing dress code is unfair, not sexist’
Raveena Tandon, Actor
Well, I honestly think that how you dress and what you are comfortable in, is a personal choice. The very fact that Kristen Stewart ditched her sky-high Louboutins to climb the stairs, I think, was really spunky. The dress code where you have to wear sky-high heels is a bit unfair. The discomfort of wearing heels can be harmful as well. There could be various reasons for someone to wear or ditch high heels, as it is personal. To dress formally and being presentable is fair, but to impose on someone such a dress code as a policy while inviting guests for a festival is unfair. It has nothing to do with sexism or gender discrimination because there are women who love wearing high heels. One should not think of this as  gender bias, but it should neither be enforced on people too. Things that are subjective  and open to interpretation. For instance, if I’m walking the red carpet together with a man, and if someone is questioning me for not wearing heels, they  can also question the guy about his dress code. You simply cannot ask me to do something that he isn’t doing.

‘Uniformity is necessary’
Samyukta Hornad, Actor
Sometimes, even when you go to a casual party, there is a need to maintain uniformity – like being the bridesmaid at a wedding where a bunch of people wear the same colour and design matching the theme and  story. It is necessary to have uniformity at some gatherings. However, there are rules for men too. So I do not think it is double standards or men against women. Compulsory high heels must be part of a formal association with an event, but I guess it is not practical for everyone and probably needs to be changed. I definitely don’t think there is anything wrong with compulsory matters at  any event, but it should be more flexible.

Awkward double standards
Elizabeth Thadikaran, Model, Actor
The controversy around Kristen Stewart’s protest against the no-flat rule is needless as it was her right to decide what to wear and how to wear. I support her. From her statement, I came to know that she was also protesting the double standards of Cannes festival. I do not know why do they put a strict policy for women  to wear heels on the red carpet. It is so awkward. I don’t know if there is sexism involved in the issue, but such double standard policies are not good, especially at an international festival like the Cannes. People have the right to wear what they are comfortable in. Having a theme-based dress code is good, but you cannot impose it.

‘Change begins’
Sowjanya Tamalapakula, Faculty, Gender Studies
Women’s fashion, since ages, has been guided not by the comfort levels but by the male gaze and phallocentric desire. Big and firm breasts, thin waist, fair skin, pumped up buttocks, flat tummy are a few examples how the  eurocentric, dominant white male world constructs the female beauty which result in violence on woman’s body in the form of silicone implants, corsets, footbinding, anorexia and plastic surgeries. In this context, Kristen Stewart’s act is radical and subversive. While the ideologies of feminism, anti-racism, gender equality and gender neutrality are pervasive in academic world, the film industry and fashion industry have stayed impenetrable for a long time. There is a need for women’s movement to penetrate into these industries to question the age old male dominance and sexism. I believe Stewart’s act is the beginning of such change.